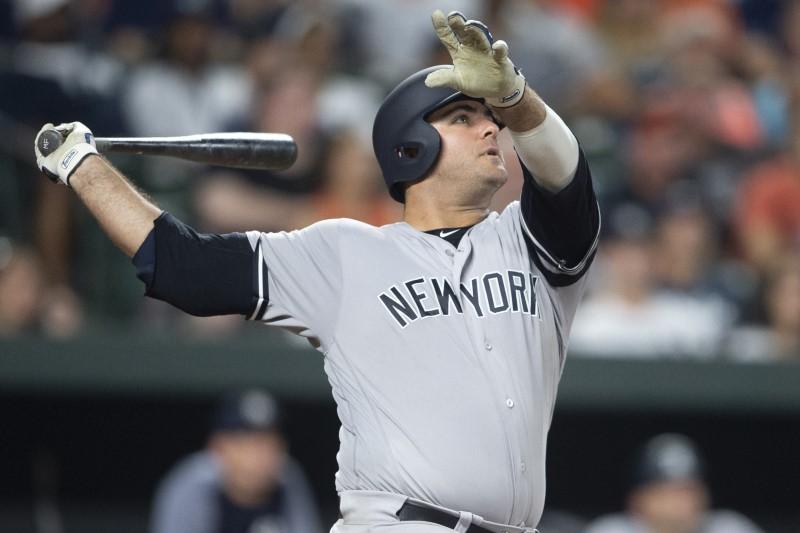 Mike Ford hit a tiebreaking homer in the top of the eighth, and Mike Tauchman added a two-run shot later in the inning as the New York Yankees set a major league mark for road home runs en route to a 9-6 victory over the Baltimore Orioles on Monday night.

Ford had just one career homer before this contest, and Tauchman finished with two on the night. Tauchman’s first, a solo shot in the sixth inning, was the Yankees’ 30th this season at Camden Yards. That set a major league mark for the most home runs by a visiting team at one ballpark in a season. The Yankees, winners of six in a row, made it 32 on the two eighth-inning homers.

The Orioles also had a noteworthy performance at the plate, as shortstop Jonathan Villar hit for the cycle. He is the fifth player to hit for the cycle in Orioles history, and the first since Felix Pie in 2009.

Pete Alonso capped a three-homer seventh inning with a solo shot to left field for red-hot New York, which climbed over .500 for the first time in three months by storming back to beat visiting Miami to complete a doubleheader sweep.

The Mets have won four straight and have gone a baseball-best 17-6 since the All-Star break to improve to 57-56. They were a season-worst 11 games under .500 on July 12. New York is one of three teams this season, along with the Washington Nationals and San Francisco Giants, to climb over .500 after being at least 10 games below that mark.

With the Mets down 4-2 in the seventh, J.D. Davis hit a leadoff homer. Two outs later, Michael Conforto homered over the right field foul pole. Alonso barely missed a homer on a foul ball, but a few pitches later, he hit a laser off the first row of seats in left field for his 35th home run.

Jacob deGrom tossed seven strong innings and helped his own cause with a two-run single to give New York a win in the first game of the doubleheader against Miami.

DeGrom (7-7) gave up two runs on five hits and one walk while striking out eight as he completed seven innings for the fourth straight start and the fifth time in his last six outings. He retired 15 of the final 16 batters he faced Monday.

The Mets took a lead when Jeff McNeil homered on the first pitch of the game off Robert Dugger (0-1), who was making his big-league debut. After Miami tied the game on consecutive pitches to begin the second — Brian Anderson and Starlin Castro both doubled — Amed Rosario gave the Mets the lead for good with a one-out homer in the third.

Waguespack (3-1) allowed four hits and one walk while striking out four. Derek Law, who got the final out of the eighth, pitched a perfect ninth for his second save. Rays starter Charlie Morton (12-4) allowed two runs and seven hits while striking out nine in seven innings.

Bichette led off the game with a double and scored on Cavan Biggio’s single. Bichette, who has hit in each of his first eight career major league games to match a club record, also led off the third inning with his third home run and his ninth extra-base hit.

Christian Yelich homered twice and Mike Moustakas went deep once as visiting Milwaukee broke a four-game losing streak with a win in Pittsburgh.

The Brewers also got three RBIs from Trent Grisham and RBI singles from Eric Thames and Orlando Arcia in ringing up 13 hits. Pablo Reyes hit a pinch-hit, two-run homer; Bryan Reynolds added a solo shot; Kevin Newman hit a three-run double and Starling Marte added an RBI triple for the Pirates, who have lost three straight.

Milwaukee starter Jordan Lyles (7-7), acquired from Pittsburgh eight days previously, pitched five innings. He gave up three runs (one earned) and two hits, with one strikeout and two walks. Josh Hader got the final four outs for his 25th save. Pittsburgh’s Dario Agrazal (2-3), making his eighth big-league start, allowed five runs and eight hits in five innings, with one strikeout and two walks.

Happ snapped a 2-2 deadlock when he drove a full-count, two-seam fastball from Blake Treinen (6-4) over the right-center field bleachers at an estimated distance of 474 feet. Baez celebrated the fifth anniversary of his major league debut with a game-tying 454-foot homer into the left field bleachers off Oakland starter Chris Bassitt in the sixth. The shortstop then hit a two-run shot into the basket in front of the left field bleachers drive off Treinen to make it 6-2 in the seventh.

Nicholas Castellanos hit his first homer since being acquired from Detroit last week, a solo shot in the bottom of the first. He then added an RBI double between Happ’s and Baez’s homers in the seventh.

Sam Travis and Rafael Devers homered as Boston took the opener of a three-game series to end its longest skid since 2015. Porcello (10-8) gave up one run on four hits and two walks, striking out five.

Bubba Starling, Cheslor Cuthbert and Meibrys Viloria homered for Kansas City, which dropped its seventh straight as starter Mike Montgomery (1-5) gave up four runs (two earned) on seven hits and one walk while striking out seven in five innings.

Luis Castillo struck out a career-best 13 batters to lead to a win over visiting Los Angeles in the opener of a two-game series.

Castillo (11-4) gave up two runs on solo homers by Luis Rengifo and Mike Trout, gave up three hits overall and walked one on a career-high 119 pitches over seven innings.

Angels right-hander Taylor Cole, on the other hand, struggled as an opener for the second straight time. Cole (1-3) surrendered five runs and five hits in the first inning, three days after he allowed four runs and four hits while recording just one out in a 7-3 loss in Cleveland.

Elvis Andrus ripped a triple to lead off the fourth inning and then scored on Nomar Mazara’s sacrifice fly for the Rangers, who have won five in a row and will attempt to match a season-high winning streak on Tuesday in the second contest of the three-game series.

Minor (10-6) flustered Cleveland for the second time this season. He allowed seven hits — all singles — while walking just one batter during his 112-pitch performance. The 31-year-old permitted one run on three hits over eight innings in a 4-2 victory versus the Indians on June 20.

Tim Anderson had three hits and scored twice, All-Star Lucas Giolito recorded his first victory in six starts, and Chicago took down host Detroit, which has lost four in a row.

Giolito (12-5) gave up three runs on eight hits and struck out eight in six innings. He walked two. James McCann reached base three times, scored twice and knocked in a run, while Matt Skole drove in two runs.

Detroit rookie starter Spencer Turnbull, just activated from the 10-day injured list, gave up two runs on two hits in three innings. He struck out seven and walked three while on a pitch count.