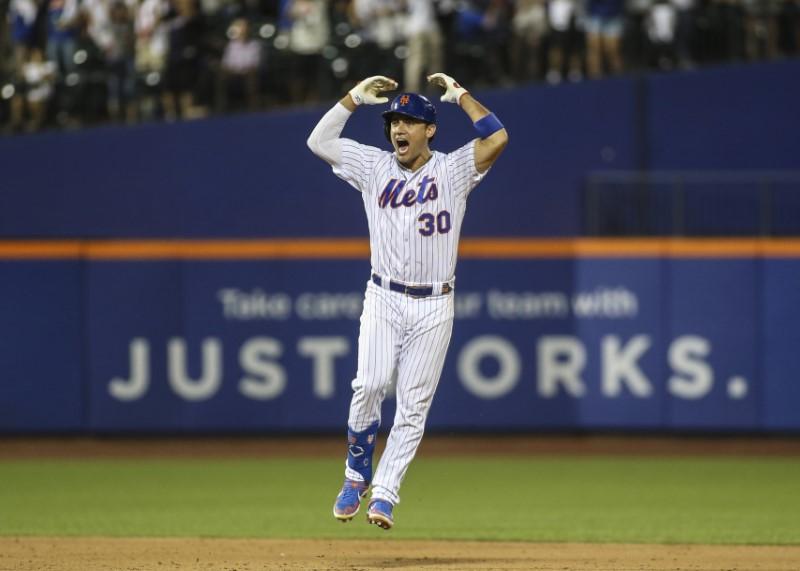 Michael Conforto laced an RBI single to right field to cap a four-run, ninth-inning comeback by the scorching New York Mets, who earned a stunning 7-6 win over the visiting Washington Nationals.

The Mets won their seventh straight contest. The Nationals had a three-game winning streak snapped.

The Mets trailed 6-3 entering the ninth inning, when J.D. Davis led off with a double against Sean Doolittle (6-4). Wilson Ramos followed with a single before Todd Frazier hit a homer well beyond the left field fence and just fair.

Joe Panik, who was signed earlier in the day by the Mets, followed with a single. Panik was forced at second on a bunt by Juan Lagares. After Jeff McNeil flied out to right, Amed Rosario singled to bring up Conforto, who hit a ball well over the head of drawn-in right fielder Adam Eaton to set off a wild celebration.

Jose Ramirez went 3-for-4, including an RBI double to highlight a five-run fifth inning, and Shane Bieber struck out 11 while picking up his 12th win of the season as Cleveland moved into a tie for first place in the American League Central with a victory over Minnesota in Minneapolis.

Yasiel Puig went 3-for-5 with an RBI and run, and Oscar Mercado and Greg Allen each had two hits for Cleveland, which won its fourth straight game. The Indians, who trailed Minnesota by 11 1/2 games on June 3, have won 41 of their past 57 games.

Bieber (12-4) allowed two runs on seven hits and two walks over seven innings. It marked the sixth start this season in which he registered double-digits strikeouts.

The reeling Pirates lost for the 22nd time in 26 games since the All-Star break. Josh Bell hit two doubles, running his National League-leading total to 36, and scored twice for Pittsburgh.

Martinez also doubled twice and had four RBIs, and Mookie Betts crushed a tiebreaking two-run home run in the fifth inning as Boston overcame an early three-run deficit to win consecutive games for the first time since July 26-27.

Marcus Walden (7-1) got the victory as part of a bullpen game, pitching 2 1/3 scoreless innings. Five Red Sox pitchers combined to hold the Angels to one hit the rest of the way after Albert Pujols hit a three-run homer with two outs in the first.

Danny Jansen added a three-run homer and Randal Grichuk had a two-run blast for the Blue Jays, who have split the first two games of the four-game series.

Mike Tauchman and Mike Ford hit solo homers for the Yankees, who had a nine-game winning streak stopped.

Julio Teheran (7-7) tied his season high with seven innings while allowing five hits, one walk and one run. He struck out seven. The right-hander has pitched 25 innings against the Marlins this year, allowing just one run.

Acuna, who went 3-for-5, has 32 home runs this season. He has homered in four consecutive games and has gone deep seven times in his past eight contests.

Alex Bregman, Yordan Alvarez and Jose Altuve each drove in a run as visiting Houston defeated Baltimore in the opener of a three-game series.

Houston has won seven straight games. Baltimore has dropped four in a row, all on the current 10-game homestand, in which the Orioles are 3-5.

The Astros had a number of scoring chances but went just 2-for-13 with runners in scoring position. Left-hander Wade Miley (11-4), who pitched two seasons for the Orioles, tossed 5 2/3 innings of one-run ball to earn his fifth straight victory.

Trevor Bauer struck out 11 over seven innings in his home debut, and Cincinnati slugged three homers en route to a victory over Chicago.

Rookie Aristides Aquino belted a two-run shot, and Eugenio Suarez and Joey Votto also went deep for the Reds, who have won nine of their past 13 games.

Bauer (10-8), who was acquired from Cleveland in a three-team deal prior to the trade deadline, allowed just one run on three hits to improve to 4-0 in four career starts versus Chicago. The 28-year-old boosted his season strikeout total to 200, marking the second straight season that he reached that plateau.

Edwin Jackson pitched 6 1/3 strong innings in his first game with Detroit in 10 seasons as the host Tigers defeated Kansas City.

Jackson (2-5) gave up one run and four hits, striking out four and walking two. The right-hander signed with the Tigers after being released by the Toronto Blue Jays last month.

Dawel Lugo had three hits and drove in two runs for the Tigers, who won back-to-back games for the first time since a three-game winning streak in late May.

Matt Chapman, Stephen Piscotty and Chad Pinder homered in support of another strong pitching performance by Mike Fiers, lifting visiting Oakland to a shutout victory over Chicago in the opener of a three-game series.

Mark Canha added two hits and Dustin Garneau contributed a two-run double, helping the A’s enjoy success on the South Side of Chicago after losing two of three on the North Side to the Cubs earlier in the week.

Fiers (11-3) extended his streak of unbeaten starts to 17 with seven shutout innings, allowing three hits and no walks. He struck out eight.