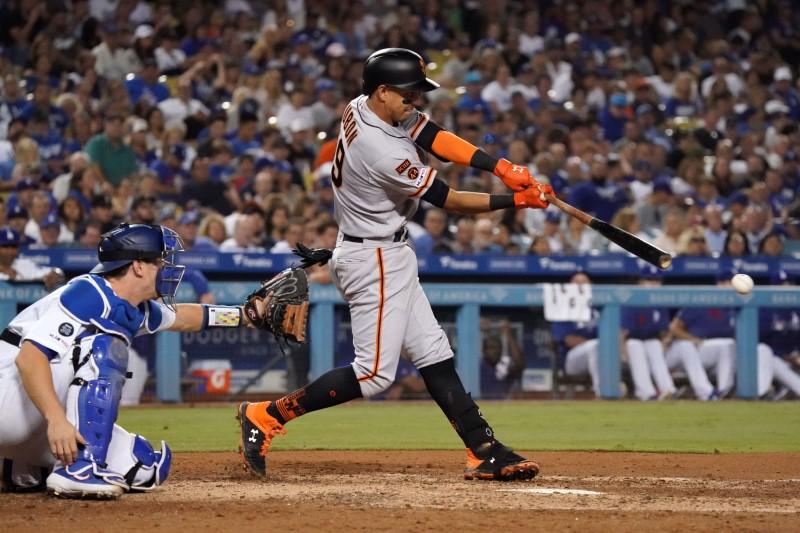 Mauricio Dubon hit a home run and Jeff Samardzija went six solid innings as the visiting San Francisco Giants topped the Los Angeles Dodgers 5-4 on Friday in the opener of a three-game series.

The Giants overcame a three-homer night from A.J. Pollock, who got the Dodgers within a run in the ninth inning with his third blast.

Brian Goodwin belted a game-tying, two-run home run in the eighth inning, Justin Upton hit a go-ahead homer in the ninth, and Los Angeles held on for a win over host Chicago.

Shohei Ohtani added a double and a triple for the Angels, who trailed 4-1 to start the seventh before mounting a comeback. Luis Rengifo also homered for Los Angeles, which snapped a four-game losing streak.

Angels center fielder Mike Trout left the game in the fifth inning because of right toe discomfort. His status is day-to-day.

Pete Alonso drew a bases-loaded walk with two outs in the bottom of the ninth inning, giving New York a dramatic win over visiting Philadelphia.

RBI singles by Alonso and Wilson Ramos in the eighth gave the Mets a 4-2 lead, setting the stage for closer Edwin Diaz to finish the game in the ninth. However, the Phillies, who played most of the game without star Bryce Harper, rallied to tie on J.T. Realmuto’s two-run homer in the top of the ninth.

The Phillies lost Harper in the third inning to what the team announced was a right hand contusion. Harper was hit by a Steven Matz pitch that went up and in and almost struck him in the face.

Mitch Moreland slugged a three-run home run on his 34th birthday, and Xander Bogaerts drove in two more with a double as Boston powered past visiting New York.

Moreland’s blast, his first since Aug. 9, gave the Red Sox a 4-0 lead in the fourth inning. He finished with three hits as Boston won for the sixth time in nine games.

Brett Gardner homered for the Yankees, who were held to three hits by a parade of Red Sox relievers. New York fell for just the third time in 11 contests.

Austin Meadows had two hits and an RBI for the AL wild-card leaders, who have won eight of their past nine games.

McKay, who finished August on the minor league injured list due to left shoulder fatigue, pitched his first game since Aug. 19. He delivered 3 2/3 innings of one-hit baseball, striking out seven without a walk.

Dallas Keuchel further established his credentials as ace of the Atlanta pitching staff with six scoreless innings, and the Braves hit two home runs in a win over visiting Washington.

It was Keuchel’s first career victory over Washington in his sixth try. Keuchel (7-5) allowed six hits and two walks, striking out three, and won his fourth straight start.

Ozzie Albies and Josh Donaldson homered for the Braves, who won their eighth straight and extended their lead in the National League East to nine games over second-place Washington. Atlanta has won 12 straight at home, tying a franchise record for the modern era.

Roberto Perez ripped a go-ahead RBI single to ignite a four-run 11th inning as Cleveland recorded a victory over Minnesota in Minneapolis.

Francisco Lindor followed with an RBI single, and rookie Oscar Mercado added a two-run single in the 11th inning for the Indians. In the eighth inning, Cleveland got a Yasiel Puig sacrifice fly to tie the score.

Tyler Clippard (1-0) picked up the win after striking out three of the four batters he faced.

Liam Hendriks, Jake Diekman and J.B. Wendelken combined for three shutout innings of relief, and Chad Pinder added a lead-extending two-run homer run in the ninth as the A’s defeated Detroit in Oakland to complete a suspended game from May 19.

Without throwing a pitch Friday, A’s right-hander Mike Fiers (14-3) picked up a win after throwing all six innings in Detroit before the game was halted in the bottom of the seventh because of rain with Oakland leading 5-3.

Reliever Zac Reininger (0-2), who gave up the go-ahead runs in the top of the seventh back in Detroit, got the loss.

Willi Castro doubled home Dawel Lugo with the tiebreaking run in the top of the 11th inning, allowing visiting Detroit to avoid a two-loss night with a victory at Oakland.

The A’s led the regularly scheduled game 4-0, but the Tigers forced extra innings with two late two-run rallies before pushing across the difference-maker against the seventh Oakland pitcher, Paul Blackburn (0-2), in the 11th.

Grayson Greiner, Christin Stewart and Miguel Cabrera joined Lugo in the multiple-hit category with two apiece for the Tigers, who beat the A’s for the first time in five tries this season.

Michael Brantley produced a two-out RBI single in the sixth inning to help provide Houston some insurance in its victory over visiting Seattle.

Houston improved to 14-1 against Seattle this season after improving to 2-0 in the current four-game series.

Jose Altuve and Alex Bregman each had two hits and two runs for the Astros, who got a home run from Josh Reddick. Daniel Vogelbach hit his 30th homer of the season for the Tigers.

In just the second Lopez versus Lopez starting-pitcher matchup in major league history, it was Jorge Lopez who excelled as Kansas City defeated Pablo Lopez and host Miami.

Pablo Lopez — no relation — allowed eight hits, no walks and two runs in 6 1/3 innings. He struck out six as his record dropped to 5-8.

Christian Yelich smacked his 44th home run of the season, and four pitchers combined on a three-hitter to lift host Milwaukee to a victory against Chicago.

Zach Davies (9-7) scattered one run and three hits with one walk and four strikeouts in five innings to earn the victory. Brent Suter, Junior Guerra and Ray Black then teamed for four innings of no-hit, one-walk, three-strikeout relief.

Despite the loss, Chicago remained 2 1/2 games behind the first-place St. Louis Cardinals in the National League Central. Milwaukee moved within four games of the Cubs for the second NL wild-card spot.

Ketel Marte had three hits, including a three-run home run, and Nick Ahmed also homered as Arizona overcame an injury-shortened outing by starter Robbie Ray in a win at Cincinnati.

Marte hit his 31st homer in a five-run fifth inning for a 6-2 lead before Ray was forced to leave with a 1-1 count on Joey Votto with one out in the last of the inning with a blister on his left middle finger.

Rookie Kevin Ginkel (2-0) pitched two scoreless innings for the victory. Archie Bradley got Curt Casali to fly out with the bases loaded in the ninth for his 13th save, all since July 30.

Tim Melville allowed just two runs on five hits over 5 2/3 innings, and visiting Colorado took advantage of some shoddy San Diego defensive play in a victory over the Padres.

Melville (2-1) and four relievers held the Padres to five hits as the Rockies snapped a nine-game losing streak while winning for only the second time in the past 15 games. The Padres have lost four in a row.

Assisted by an error and a passed ball, two of the three runs that the Rockies scored in the first two innings were unearned.

The Pirates broke an eight-game losing streak against the Cardinals.

Kevin Newman had an RBI double, Starling Marte a two-run single, and Melky Cabrera and Jose Osuna each added an RBI single for Pittsburgh, which has won 10 of 14.

Shin-Soo Choo, Rougned Odor and Elvis Andrus had two hits each, and Andrus delivered a two-run single in the seventh to give Texas the lead.

Richie Martin hit a three-run home run for the Orioles, Anthony Santander hit a two-run shot, and Trey Mancini had a solo homer.