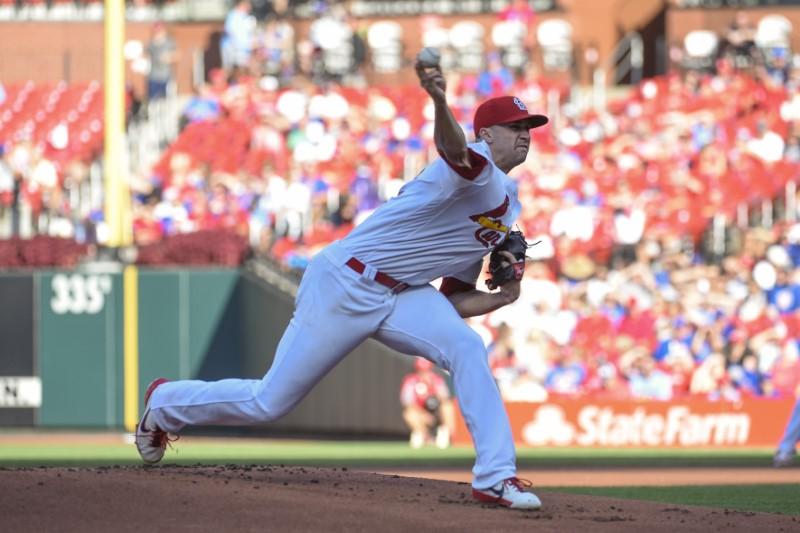 Jack Flaherty took a no-hitter into the sixth inning, allowed one hit in seven outstanding innings and combined with two relievers on a one-hitter as the St. Louis Cardinals continued their surge with an 8-0 victory over the visiting Chicago Cubs on Thursday night.

Flaherty (5-6) lost his no-hit bid on his 81st pitch when Nicholas Castellanos lined a clean single to right field on a 2-2 fastball. The right-hander recovered by striking out Kris Bryant and easily breezed through the seventh.

Jon Lester (9-7) allowed five runs on nine hits with six strikeouts and no walks in five-plus innings and took the loss.

Rookie catcher Will Smith slugged a go-ahead grand slam in the sixth inning to help Los Angeles beat San Diego and improve its home record to an MLB-best 41-14.

Cody Bellinger homered and drove in three runs for Los Angeles, and Clayton Kershaw (10-2) overcame a season-worst five walks to improve to 20-6 all-time against the Padres. Kershaw gave up two runs and six hits in six innings and fanned five to move into third place in Dodgers’ history with 2,397 career strikeouts.

Kershaw passed legendary Sandy Koufax (2,396) when he fanned Austin Hedges for the second out in the sixth inning. Don Sutton (2,696) and Don Drysdale (2,486) are the top two on the team’s list.

August began as July ended for surging Tampa Bay, which with a win over host Boston completed a three-game sweep of their American League East rivals.

Mike Zunino and Austin Meadows homered, Tommy Pham doubled twice and drove in two runs and starter Brendan McKay (2-1) got plenty of run support while holding the Red Sox to three runs on seven hits in 5 1/3 innings, striking out seven to improve to 2-1.

The Rays, despite two Xander Bogaerts home runs and a solo shot by Mookie Betts, won their fourth straight game and maintained their grasp on the No. 2 wild-card spot in the AL, with the Oakland Athletics a half-game behind. The Red Sox lost their fourth straight and fell 3 1/2 games behind the Rays.

Gerrit Cole (13-5) allowed one run over seven strong innings and Alex Bregman homered to highlight his three-hit performance as visiting Houston recorded a victory over Cleveland.

Former Indians outfielder Michael Brantley and Yordan Alvarez joined Bregman in driving in two runs each and George Springer belted his 32nd career leadoff homer for the Astros, who have won 11 of their last 14 games.

Cleveland’s Yasiel Puig, who is appealing his three-game suspension for his part in a brawl in his last game with the Cincinnati Reds, joined Franmil Reyes by recording a hit apiece in their respective debuts with the Indians. Both players were later thrown out at the plate, however.

Robinson Cano homered and finished with two RBIs for the Mets, who have won a season-high seven consecutive games to move within two games of .500 at 53-55 — the closest they have been to the break-even mark since June 15. New York has the second-best record in the National League (13-5) since the All-Star break.

The White Sox lost their fourth straight game to fall to an AL-worst 4-16 since the All-Star break.

J.T. Realmuto had three hits, including a three-run homer, and Philadelphia won the rubber game of the three-game series against visiting San Francisco. Scott Kingery also had three hits and drove in two runs, Cesar Hernandez had two hits and three RBIs, and Roman Quinn added a solo homer for the Phillies.

Phillies starter Jake Arrieta went four innings, allowing two runs (one earned) and four hits. He struck out five and walked one. Jose Alvarez (2-2) relieved Arrieta with Philadelphia leading 9-1 in the fifth and he finished the inning to become the pitcher of record.

The homer was Oakland’s second of the series off Hader (1-5), after Matt Olson had ended Tuesday’s series opener with a walk-off shot in the 10th inning for a 3-2 win.

With the A’s down 3-2, Robbie Grossman started off the eighth by drawing a full-count walk from Hader, who worked in all three games of the tightly contested series. Chapman then drilled Hader’s next pitch over the wall in center field for his team-leading 24th homer of the season.

Vladimir Guerrero Jr. hit two homers and drove in four and visiting Toronto finished with five home runs in a victory over Baltimore.

Guerrero hit a two-run homer and a solo shot and also added an RBI double. He went 3-for-5 with those four RBIs in the second multi-homer game of his brief career. Danny Jansen, Randal Grichuk and Billy McKinney each added homers as Toronto extended its winning streak to four games.

Trent Thornton (4-7) earned the victory with six strong innings after being activated from the injured list before the game. Baltimore starter Asher Wojciechowski (2-4) had given the Orioles two great starts in his previous two outings but didn’t have it this time. The right-hander allowed four runs on six hits — including two homers — in 4 2/3 innings.

It was the second walk-off hit of the homestand for Ramirez, who crushed a 2-2 fastball from Cody Stashak (0-1). The 406-foot shot to left field was Ramirez’s seventh homer of the season. The Marlins, who have the worst record in the National League, sent the game to extra innings by scoring three runs in the ninth, avoiding what would have been a three-game sweep.

Twins reliever Sam Dyson, acquired from the San Francisco Giants on Wednesday, faced four batters in the ninth and got no outs, allowing a Jon Berti RBI double and leaving with the bases loaded.

Freddie Freeman and Adam Duvall homered and left-hander Max Fried earned his 12th win as host Atlanta beat Cincinnati in a game shortened to six innings because of rain.

Fried (12-4) worked six innings and earned the win. He threw one pitch in the seventh before the grounds crew scurried to cover the field for a rain delay that lasted 1 hour, 46 minutes.

The Braves now lead the National League East by seven games over Philadelphia and Washington.