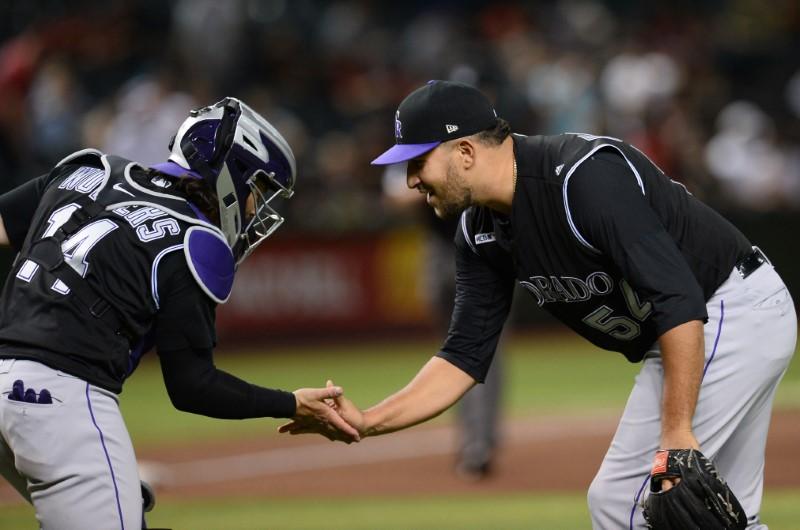 Charlie Blackmon became the first Colorado player to have at least three hits in five consecutive games as the Rockies beat the Arizona Diamondbacks 8-1 in Phoenix on Tuesday night.

Blackmon, who set a major league record with 15 hits in a four-game series against the San Diego Padres last weekend, went 3-for-5 with a double on Tuesday. He is the 12th player since 1900 — and the first since Houston’s Jose Altuve (July 4-9, 2017) — with three hits or more in five consecutive games, per the Elias Sports Bureau.

Blackmon led off the game with a double and scored on Nolan Arenado’s two-out homer off Merrill Kelly (7-7) for a 2-0 lead. Blackmon singled in the third and seventh innings.

Colorado banged out 12 hits to support starter Antonio Senzatela (6-5). He pitched 6 2/3 innings, allowing one run while scattering seven hits and four walks. He struck out five.

Max Kepler singled with the bases loaded in the 17th inning to give Minnesota its first walk-off win of the season, a decision over Boston in Minneapolis.

Rafael Devers went 3-for-8 with a homer and two RBIs, and Andrew Benintendi and Brock Holt also had three hits for Boston, which had its season-high six-game winning streak snapped.

Allen (1-0) also got his first big-league hit in the fifth inning and scored the game’s first run. Francisco Mejia, who last week was catching Allen at Triple-A El Paso, hit a two-run homer for the Padres.

Allen, 22, issued two walks and hit a batter while striking out five. He threw 90 pitches, 56 of them strikes. The Padres turned three double plays in the first six innings behind Allen, who ended his outing in style, striking out all three batters in the seventh.

Yamamoto (2-0) allowed just two hits and two walks in seven innings, striking out seven and keeping his ERA at 0.00. Yamamoto also beat the Cardinals 9-0 on June 12.

Starlin Castro and Brian Anderson hit home runs to lead Miami’s offense. Castro’s solo shot was his fifth homer of the season. Anderson’s two-run blast was his eighth homer of the year.

Giancarlo Stanton returned to the lineup for host New York, but newcomer Edwin Encarnacion who stole the show, homering for the first time since joining the club as the Yankees topped visiting Tampa Bay.

In the eighth inning, Encarnacion hit his league-leading 22nd homer. Teammate Cameron Maybin homered for a career-high fourth straight game as the Yankees won their fourth straight. They also extended their streak of hitting at least one homer in 21 straight games, the longest in the majors this season and four shy of the team record set in 1941.

Kershaw (7-1) held the Giants to three hits five years after the Rockies failed to collect any in a game at Dodger Stadium. Giants rookie starter Shaun Anderson (2-2) gave up three runs on seven hits over 5 2/3 innings in his first career start against the Dodgers.

Joc Pederson hit a leadoff home run in the bottom of the first inning, and Enrique Hernandez added a grand slam in a six-run seventh as the Dodgers rebounded from a 3-2 loss to the Giants on Monday.

Jacob deGrom won for the first time since May 11, and rookie first baseman Pete Alonso picked up his first four-hit game to power New York past host Atlanta.

DeGrom (4-6) celebrated his 31st birthday a day early by winning for the first time. Atlanta’s Freddie Freeman and Josh Donaldson ended his bid for a shutout by hitting back-to-back homers with one out in the ninth. He gave up five hits in 8 1/3 innings and was lifted after 113 pitches.

DeGrom struck out 10, his fourth time this season in double digits. He picked up his 1,107th career strikeout, moving him past Al Leiter and into seventh place on the team’s all-time list, and finished the night with 1,112.

Jesse Winker and Derek Dietrich slugged home runs in the first inning before Kyle Farmer added a third homer against Justin Verlander in the seventh as host Cincinnati defeated Houston.

The Reds saddled the Astros with their first series loss since April 29-May 2. Cincinnati has won three consecutive games for the first time since May 9-11.

It marked just the fifth time in his 15-year career that Verlander (9-3) had allowed two homers in the first inning. He gave up four runs on six hits and one walk with eight strikeouts over seven innings.

Eloy Jimenez launched a go-ahead, two-run home run in the ninth inning in his first game against his original organization, boosting the Chicago White Sox past the host Chicago Cubs.

Jimenez, a rookie left fielder, smacked a 1-0 pitch from Pedro Strop (1-3) into the left field bleachers for his 12th home run of the season and sixth in nine games.

Alex Colome pitched a perfect ninth for his 15th save in as many chances, capping a solid outing from the White Sox bullpen. The White Sox relief corps contributed four scoreless innings of two-hit ball with zero walks and four strikeouts.

Rookie Oscar Mercado scored three times and Ramirez also homered as Cleveland banged out 14 hits en route to its ninth win in 13 outings. Plesac (2-2) worked around Rougned Odor’s solo homer in the fifth inning and Nomar Mazara’s single to lead off the seventh to allow just one run.

The Angels have won the first two games of the four-game series and have taken all five games this season against the Blue Jays. Lourdes Gurriel Jr. hit a home run for the Blue Jays.

Skaggs (6-6) allowed three hits, no walks and one run while striking out six. Ty Buttrey retired the last two batters in the eighth, and Hansel Robles pitched a perfect ninth with one strikeout for his 11th save of the season.

Beau Taylor triggered a six-homer assault on Baltimore pitching with his first major league blast as host Oakland made it two straight to open the three-game series.

The loss was Baltimore’s seventh straight while Oakland improved to 5-2 in its past seven games. Athletics left-hander Brett Anderson (7-4) coasted through seven innings, allowing two runs (one earned) and four hits. He walked one and struck out two.

Jorge Soler also homered, and rookie Nicky Lopez went 3-for-4 with a double and two runs for Kansas City, which has won the first two games of the series and will look for a sweep Wednesday afternoon.

Bailey (6-6) allowed five hits, walked two and struck out six. It was his second consecutive start in which the right-hander didn’t allow any runs, as Bailey pitched six scoreless innings in a 7-3 victory against the Detroit Tigers last Thursday in Omaha, Neb.

Detroit scored the winning run in the eighth inning with the help of host Pittsburgh’s mistake-prone defense and broke a four-game losing streak.

In a 4-4 game, Detroit loaded the bases with one out in the eighth on a walk by Nicholas Castellanos, a single by Miguel Cabrera and a pitch from reliever Kyle Crick (2-3) that grazed Christin Stewart’s foot. Brandon Dixon’s grounder might have been a double play, but second baseman Adam Frazier chose to go to first base first, and Castellanos scored to give the Tigers a 5-4 lead.

Castellanos had an RBI double and Cabrera an RBI single for the Tigers. Josh Bell homered, and Jung Ho Kang and Kevin Newman each hit an RBI triple for Pittsburgh, which was charged with three errors while losing for the ninth time in 11 games.