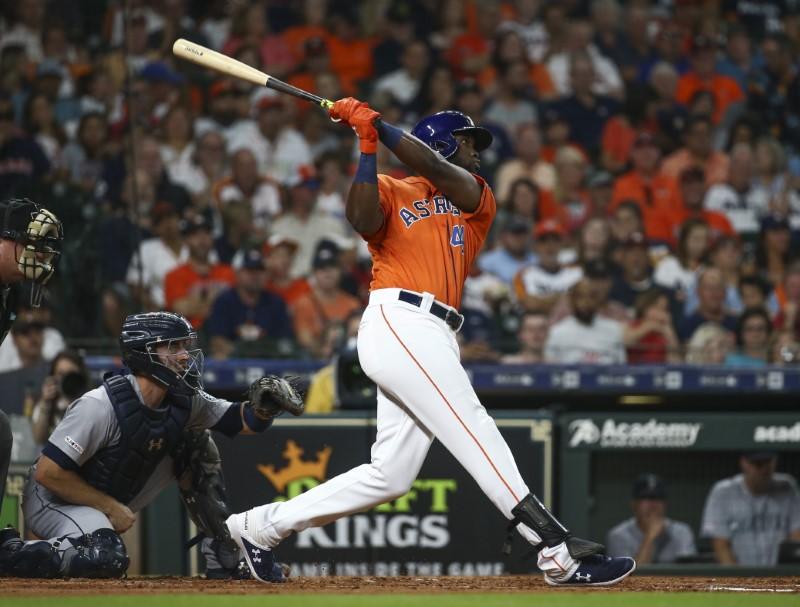 Rookie Yordan Alvarez slugged the first of Houston’s season-high six home runs as the Astros bashed their way to a 10-2 victory over the visiting Seattle Mariners on Friday.

The Astros posted three runs in the second, fourth and fifth innings, all via the home run. Alvarez recorded a leadoff blast to straightaway center field in the second to ignite the surge. Later that frame, Jake Marisnick clubbed the first of the Astros’ three two-run homers, extending the lead to 3-0.

Houston homered twice more against Mariners rookie left-hander Yusei Kikuchi (4-8), who is winless over his last six starts. The Astros followed the same pattern in the fourth inning, with recently acquired catcher Martin Maldonado slugging a solo home run the opposite way to right three batters before Jose Altuve lined a two-run shot to left.

George Springer tripled to right-center field with two outs prior to Altuve’s homer, the first of his four hits on the night.

Josh Bell, Jose Osuna and Elias Diaz each added an RBI single for the Pirates, who rode a five-run fourth. They had lost 10 of their previous 11.

Pete Alonso and J.D. Davis each had an RBI double for the Mets. New York starter Steven Matz (6-7) lasted 3 2/3 innings, allowing five runs and six hits, with four strikeouts and one walk — vastly different from Saturday, when he threw his first complete game, a shutout against the Pirates.

Lynn tied the Astros’ Justin Verlander and the Nationals’ Stephen Strasburg for the major league lead with his 14th win. He allowed one run on four hits with two walks.

Niko Goodrum had three hits, a run scored and an RBI for Detroit, while Harold Castro added two hits and an RBI. Travis Demeritte added a triple, two walks and a run scored in his major league debut.

James Paxton settled down after allowing a home run in the first inning and pitched six effective innings as New York beat visiting Boston in the opener of a four-game series.

The Yankees won for the third time in four games since dropping the first three of last weekend’s four-game set at Fenway Park. Boston dropped its season-high fifth straight game, and it is the first time since an eight-game skid in July 2015 that the Red Sox have lost at least five in a row.

Gleyber Torres hit his second career grand slam in the bottom of the first inning, after which no runs were scored. J.D. Martinez hit a 2-run shot in the top of the first for the Red Sox’s only points.

Nelson Cruz hit a home run, doubled twice off the wall in right-center and drove in five runs, while Max Kepler had two doubles, two walks and scored three times to lead Minnesota to a wild victory over visiting Kansas City.

Freddy Galvis and Brandon Drury both homered as visiting Toronto extended its winning streak to five games with a victory over Baltimore.

The Blue Jays have won the first two games of a four-game series after taking three in a row against Kansas City.

Toronto banged out five homers in the opener Thursday, an 11-2 victory, and now has seven in the series. Baltimore’s young pitching staff has given up a major-league high 214 homers this season.

Yasiel Puig and Carlos Santana each drove in a pair of runs, and Mike Clevinger tossed 6 1/3 strong innings as host Cleveland posted a victory over Los Angeles.

Roberto Perez belted a solo homer, and Jose Ramirez had an RBI double for the Indians, who have won 13 of their last 14 home games versus Los Angeles.

Mike Trout launched his American League-leading 36th homer, and Matt Thaiss had a pinch-hit two-run double in the ninth inning for the Angels, who have lost six of their last eight contests.

Javier Baez had three hits, including a two-run homer, and drove in three runs to lift Chicago over visiting Milwaukee in the opener of their three-game series.

Kris Bryant had two hits, and Jason Heyward homered for the Cubs, who had dropped seven of 10 coming into the series.

Chicago left-hander Jose Quintana (9-7) allowed two runs, seven hits and struck out five in six innings. For the fourth straight game, the Cubs’ starter did not walk a batter. Quintana also drove in a run with a single in the three-run third.

Wood (1-0) was making his second start of the season after coming off the injured list with a back issue. He allowed two runs on four hits with one walk and five strikeouts. It was his first win in a Reds uniform and evened his career record against his former team to 3-3.

Michael Lorenzen worked 1 1/3 perfect innings in relief of Wood. Raisel Iglesias pitched a clean ninth and earned his 21st save, his fifth since the All-Star break. Iglesias struck out Atlanta sluggers Freddie Freeman and Josh Donaldson to end the game.

Ryan McMahon and Trevor Story each homered, and the Colorado rallied to beat San Francisco in Denver.

Rockies outfielder David Dahl was carted off the field in the top of the sixth inning with what looked like a serious injury to his right ankle, which buckled as he tried to reach back and catch Scooter Gennett’s liner.

Mike Yastrzemski homered, and Steven Duggar had two hits for San Francisco. The Giants had won four straight against the Rockies.