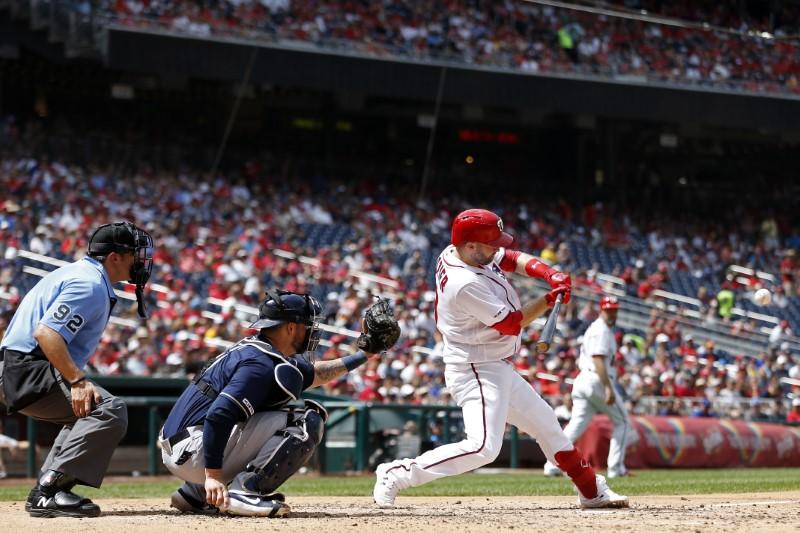 The Washington Nationals capped off a productive week on offense by slugging a franchise-record-tying eight home runs in a 16-8 rout of the visiting Milwaukee Brewers on Sunday afternoon.

Victor Robles and Adam Eaton notched solo dingers for the Nationals, who tallied 19 hits and won for the sixth time in seven games, including a 17-7 win over Cincinnati on Wednesday. Catcher Yan Gomes went 3-for-5.

For the Brewers, Mike Moustakas had three hits, two homers and five RBIs, and Ben Gamel went 4-for-5 with a homer.

Right-hander Zack Greinke earned his 200th career victory, and visiting Houston avoided a series sweep with a win over Oakland.

Alex Bregman went 4-for-4 and belted his 30th home run of the season, a three-run shot in the fifth inning that erased a 1-0 deficit and allowed the Astros — who had lost the first three games of the series — to snap a five-game losing streak.

Greinke (13-4) held the A’s to one run and four hits in seven innings en route to his third consecutive win since joining the Astros in a trade last month.

Alonso’s ninth-inning blast cleared the Mets bullpen in left. He broke a tie with the Dodgers’ Cody Bellinger, who hit 39 in 2017.

Trailing 4-3, the Mets scored six runs off the Kansas City bullpen in the seventh inning to seize the game. Jeurys Familia (4-1) picked up the win after a scoreless sixth before the Mets rally.

Ortega connected in the sixth inning against reliever Dustin May (1-2) for a long homer to right field, his first since being recalled from Triple-A Gwinnett on Tuesday.

The Braves won the final two games of the three-game series between two division-leading clubs. The Dodgers won four of six against Atlanta this season.

Kyle Schwarber added a two-run single, and Kris Bryant an RBI double for the Cubs, who won their second in a row following a four-game losing streak.

Chicago won its first road series since taking two of three against Washington from May 17-19. The first two games of the series were played at PNC Park in Pittsburgh.

Mike Clevinger struck out 10 in five scoreless innings to win his seventh straight decision, Mike Freeman hit a three-run homer and Cleveland gained a split of its four-game series at New York.

Freeman, who started at third base as Jose Ramirez rested, hit his fourth homer of the season in the second and doubled twice.

Francisco Lindor barely cleared the fence with a solo drive, and rookie Oscar Mercado accounted for Cleveland’s final three runs with a double and a two-run homer in the eighth. The Indians scored 27 runs and hit 10 homers in their two wins at Yankee Stadium.

Boston has won five in a row. The Red Sox rallied from an early 6-0 deficit with help from Devers, who finished 4-for-5 with two doubles, a two-run homer and four RBIs.

Garrett Hampson hit a soft single to left field with the bases loaded in the 10th inning, and Colorado beat Miami in Denver.

Nolan Arenado hit a pair of home runs, Charlie Blackmon also went deep and Carlos Estevez (2-2) got the win for the Rockies, who posted their first sweep since claiming a three-game set against the Arizona Diamondbacks from June 18-20.

Harold Ramirez had three hits and drove in a pair of runs for the Marlins.

Ji-Man Choi hit a two-run single in the bottom of the ninth to give Tampa Bay a win over visiting Detroit.

Tommy Pham hit a two-run homer and scored twice for the Rays, who took two of three in the series. D’Arnaud knocked in the other run for Tampa Bay, while Jose Alvarado (1-5) pitched a scoreless inning of relief to pick up the win.

Tigers starter Matthew Boyd reached the 200-strikeout mark for the season. He held the Rays to one run on two hits and walked just two in seven innings.

Lane Thomas and Marcell Ozuna each drove in a run for the Cardinals, who earned a split of the four-game series against Cincinnati with their seventh victory in their past nine contests.

Tucker Barnhart ripped a two-run single to right field in the ninth inning off Carlos Martinez to trim St. Louis’ lead to 5-4, but the right-hander struck out two of the next three batters to secure his 14th save.

Phillies superstar Bryce Harper left the game after five innings because of dehydration, the team said. The heat index on the field exceeded 100 degrees.

Luis Urias also homered for the Padres, who took two of three games in the series.

Yusei Kikuchi pitched a two-hitter on the way to his first major league shutout and was supported by four home runs as visiting Seattle topped Toronto.

Kikuchi allowed one walk and struck out eight. Kyle Seager, Austin Nola, Tom Murphy and Keon Broxton homered for the Mariners, who took the rubber match of the three-game series.

It was the first win for Kikuchi (5-8) since June 23, a span of eight starts in which he lost three times. His previous win had been May 19.

Jorge Polanco hit a three-run triple with two outs in the eighth inning to break a 3-3 tie and carry Minnesota to a four-game series sweep of host Texas.

Sam Dyson (5-1) picked up the win, allowing one run on three hits over an inning of relief. Taylor Rogers struck out Rougned Odor with runners on first and second for the final out for his 19th save.

Shin-Soo Choo went 2-for-5 with a home run, Hunter Pence had three hits and a walk, and Jeff Mathis drove in two runs for Texas, which lost its fourth straight game.

Merrill Kelly allowed one run and six hits over 5 2/3 innings to help Arizona end a four-game losing streak with a win against visiting San Francisco.

Wilmer Flores had two hits, including a solo homer, David Peralta also homered, and Adam Jones had two RBIs in his first start in center field this season for Arizona.

Matt Thaiss finished a triple short of the cycle and drove in four runs, and Kole Calhoun, Shohei Ohtani and Anthony Bemboom homered to back seven strong innings from Griffin Canning and lift host Los Angeles to a win over Chicago.

Los Angeles out-hit Chicago 15-7 in the series finale and won three of four games over the weekend.

Thaiss provided the only run support the Angels needed in a pitching matchup of rookie right-handers, drilling a three-run home run to right field against the White Sox’s Dylan Cease with one out in the second inning.