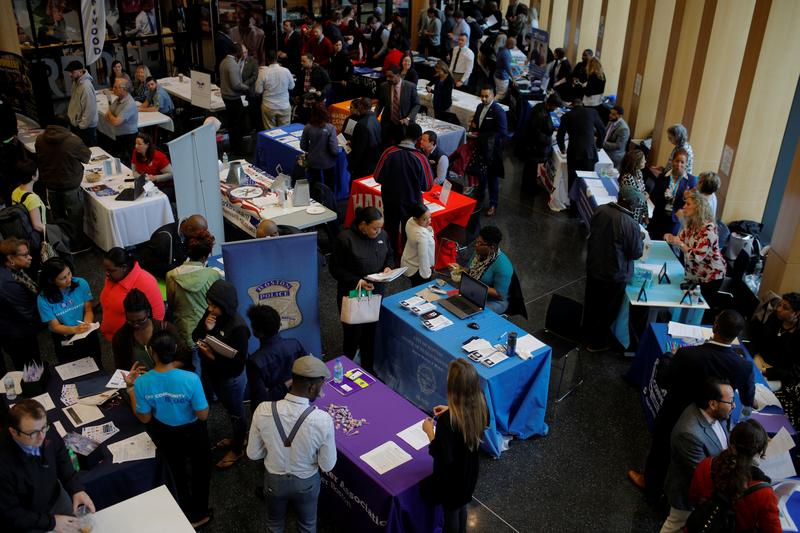 WASHINGTON (Reuters) – U.S. private payrolls increased more than expected in February, pointing to labor market strength before a recent escalation of recession fears ignited by the coronavirus epidemic that prompted an emergency interest rate cut from the Federal Reserve.

FILE PHOTO: Job seekers speak with potential employers at a City of Boston Neighborhood Career Fair on May Day in Boston, Massachusetts, U.S., May 1, 2017. REUTERS/Brian Snyder

The ADP National Employment Report on Wednesday showed private payrolls rose by 183,000 jobs last month as warmer weather boosted hiring at construction sites and in the leisure and hospitality industry. Data for January was revised down to show private payrolls rising by 209,000 instead of the previously reported 291,000 surge. Economists polled by Reuters had forecast private payrolls gaining 170,000 jobs in February.

The ADP report, jointly developed with Moody’s Analytics, came a day after the Fed slashed its benchmark overnight interest rate by a half percentage point to a target range of 1.00% to 1.25%, in the U.S. central bank’s first emergency rate cut since 2008 at the height of the financial crisis. Fed Chair Jerome Powell said “the coronavirus poses evolving risks to economic activity.”

The fast-spreading coronavirus has killed more than 3,000 people and sickened at least 90,000, mostly in China. In the United States, nine people have died from the illness associated with the virus and the number of infections exceeded 100.

Investors fear the coronavirus epidemic could derail the longest U.S. economic expansion in history, now in its 11th year, through disruptions to supply chains and exports. It is also expected to hurt the transportation, tourism and leisure and hospitality industries.

The ADP report was published ahead of the government’s more comprehensive employment report for February scheduled for release on Friday. The survey was conducted during the week including the 12th day of the month, to match the period when the government canvasses business establishments for the non-farm payrolls component of the closely watched employment report.

The dollar was trading higher against a basket of currencies. U.S. Treasury prices were mostly higher. Stocks on Wall Street rallied at the open.

Moody’s Analytics chief economist Mark Zandi told reporters that he had not seen anything to suggest a hit to the labor market from the coronavirus in the period after the survey week. Zandi, however, said he expected job growth to slow in the coming months because of the coronavirus and also as the boost from the unseasonably mild weather fades.

While the ADP has a poor record predicting the private payrolls component of the government’s employment report because of methodology differences, the bigger-than-expected increase in hiring last month suggested that labor market fundamentals remain solid.

According to a Reuters survey of economists, the government report on Friday is likely to show non-farm payrolls increased by 175,000 jobs last month after surging 225,000 in January. The unemployment rate is forecast steady at 3.6% in February.

Economists expect the coronavirus to restrain economic growth in the first half of the year to just above 1.0%. The economy grew 2.3% in 2019.