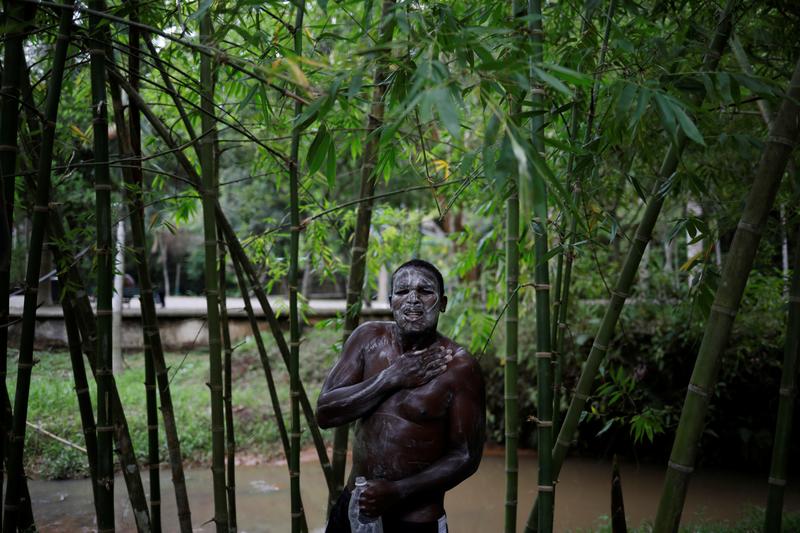 TAPACHULA, Mexico (Reuters) – Mexico’s immigration centers are becoming increasingly squalid and overcrowded as authorities step up the detention of migrants headed for the United States, with inmates languishing for weeks amid medical neglect, according to detainees, lawyers and rights groups.

Reuters spoke to more than a dozen recent detainees at the Siglo XXI detention center, the country’s largest. They described being held in the facility in Chiapas state on Mexico’s southern border for long periods without information about their cases.

Their accounts were supported by two lawyers representing 26 other inmates, as well as the migration ombudsman at Mexico’s National Human Rights Commission and reports from two migrant rights groups: Fray Matias de Cordova and the Human Rights Observation Mission for the Refugee and Humanitarian Crisis in Southeast Mexico, a collective of 24 aid groups.

Twelve of the detainees told Reuters they were held for at least three weeks in the center, meant to hold people for a maximum of 15 days until their cases are processed.

Mexico’s National Immigration Institute (INM), which runs Siglo XXI, did not respond to repeated requests for comment on conditions at the center.

Asked about the extended detentions, an INM official, who asked not to be identified, said migrant cases were complex and needed to be analyzed on an individual basis.

Guards at the gates of the center declined to answer questions or to allow a Reuters reporter to speak with its director.

U.S. President Donald Trump made a crackdown on illegal migration the flagship policy of his 2016 election campaign. Struggling to get the funds from Congress to build a border wall, and with a significant uptick in Central Americans seeking asylum, he threatened trade tariffs unless Mexico plugged leaks south of the U.S. border.

In response, Mexico has increased detentions. During the first five months of this year, it has tripled the number of migrants it detained monthly to reach 23,679 in May, according to unpublished government data seen by Reuters.

That has strained its underfunded network of centers, which already had a reputation for poor conditions.

Foreigners stopped by Mexican authorities without valid documents can be held in detention while they await transit visas or regularization of their situation. Edgar Corzo, the migration ombudsman, said that process is meant to take no more than 15 days.

Thousands have passed this year through the gates of Siglo XXI, which Corzo and the migrant rights groups said had been at or near double its 970-person capacity for months.

All the people spoken to for this story said detainees slept on thin mattresses or none at all in corridors and bathrooms because of lack of space in cells.

A Haitian migrant bathes in a park in Tapachula, Mexico, May 14, 2019. REUTERS/Andres Martinez Casares

Corzo said that INM had failed to alleviate the overcrowding despite repeated requests from the human rights commission, which he attributed partly to a lack of resources.

Inmates said children older than 13 years were separated from parents and lights were kept on all night, disrupting sleep – claims supported by a May 31 report from the migrant aid collective and the migration rights ombudsman.

They also told Reuters about unsanitary conditions that led to mass outbreaks of diarrhea among child detainees.

Hundreds of detainees have broken out of Siglo XXI in recent weeks after disturbances that inmates told Reuters were triggered by squalid conditions. INM acknowledged one breakout.

Photographs and videos shared with Reuters by one inmate at Siglo XXI purported to show lavatories blocked and overflowing with filth as well as dozens of semi-naked men sprawled on black mattresses in a corridor.

Reuters was not able to confirm their accuracy.

Mavi Cruz Reyes, spokeswoman for Fray Matias de Cordova, said the group has documented multiple cases of detention lasting weeks at Siglo XXI. Detainees frequently are given no access to information about why they are detained, the group said.

The rights ombudsman told Reuters that some smaller centers among Mexico’s 58 immigrant detention facilities were even more overcrowded than Siglo XXI, holding up to four times capacity.

Instead, they took her to Siglo XXI, where her phone and other belongings were confiscated, she said.

“They told me it was to ‘regularize’ my status, that all would be well and that this wasn’t a prison, it was a lodging area,” Garcia told Reuters after she was freed. “It was a prison: a prison in every sense of the term.”

Garcia said her pregnancy is high risk due to endometriosis – a uterine condition – but she was ignored when she pleaded for help during an episode of fainting and acute abdominal pains. When detainees took her to the clinic, she said the nurse gave her a pill without explaining what it contained.

Reuters was not able to independently confirm Garcia’s account. Four other inmates told Reuters they did not receive treatment for episodes that ran from fever to abdominal pains.

Garcia said she was held at the center for three weeks. On April 13, she filed for asylum in Mexico with an official from the United Nations Refugee Agency, UNHCR. She showed Reuters an asylum application with that date.

UNHCR declined to comment on her case but confirmed it had assisted some Siglo XXI detainees with asylum applications. It said in a statement to Reuters it was concerned about conditions at the site and that detention of asylum seekers should be an exceptional practice as it could lead to their deportation, in violation of international law.

Cuban asylum applicant Yildiz Gomez, 22, attempted suicide by swallowing a bottle of pills used to treat ear infections after she was hauled back into Siglo XXI, having been about to be freed after three weeks in detention, according to her husband and two inmates. Detainees forced her to throw up.

On May 8 – after 47 days in detention – Gomez gave up on a legal solution. Along with dozens of other detainees, she escaped, becoming a fugitive in Mexico.