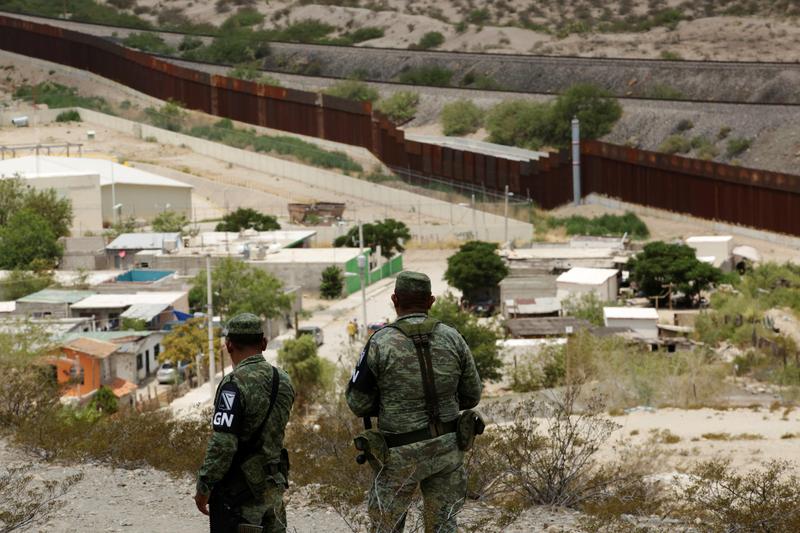 FILE PHOTO: Members of the Mexican National Guard patrol the border with the United States, as seen from Anapra neighborhood, on the outskirts of Ciudad Juarez, Mexico, July 24, 2019. REUTERS/Jose Luis Gonzalez

MEXICO CITY (Reuters) – The number of migrants reaching Mexico’s border with the United States has fallen almost 40% since May, the Mexican government said on Tuesday, seeking to defuse tensions with U.S. President Donald Trump over a recent surge in migration.

Foreign Minister Marcelo Ebrard said that according to a preliminary estimate, 87,648 people would reach the U.S. border during July. That would represent a fall of around 39.5% compared to the 144,278 migrants registered in May, he added.

“This is a considerable reduction,” the minister told reporters at a regular government news conference.

A jump in migrant apprehensions on the U.S. southwest border during the first few months of 2019 prompted Trump on May 30 to threaten tariffs on all Mexican exports to the United States if Mexico did not contain the flow of people.

Mexico responded by sending out thousands of National Guardsmen to tighten up its southern and northern borders, and this month the government said it had averted the risk of having to adopt new migration rules that could allow Trump to expel thousands of asylum-seekers into Mexico.

Ebrard credited the migrant slowdown to rising job creation in Central America, spurred in part by the Mexican government’s efforts to foster development programs and growth there.

Most of the migrants caught trying to enter the United States illegally are from Guatemala, Honduras and El Salvador, three countries ravaged by violence, inequality and poverty.

Mexico’s government said on Saturday that it will help Honduras create 20,000 jobs by December, building on earlier commitments to El Salvador.