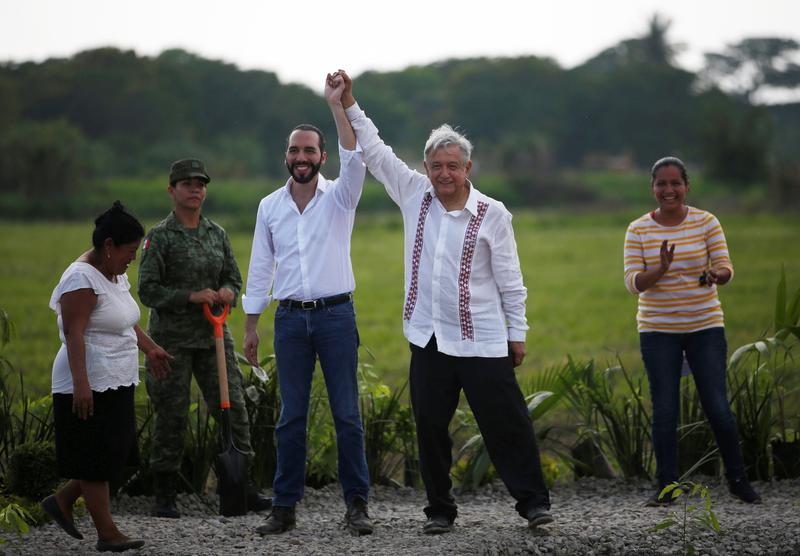 TAPACHULA, Mexico (Reuters) – Millions of new trees will soon begin sprouting in El Salvador thanks to a program funded by the Mexican government that aims to help impoverished communities that often create fertile ground for fleeing migrants.

Part of a larger push to plant more fruit and wood trees championed by Mexican President Andres Manuel Lopez Obrador, the $30 million grant will be spread across some 1.2 million acres (50,000 hectares), an area the size of more than 900,000 American football fields.

The program was announced on Thursday in Tapachula, a Mexican town that borders Guatemala, during an event headlined by Lopez Obrador, Mexico’s leftist leader who has long focused on the poor, and El Salvador’s new president, Nayib Bukele.

Their partnership comes as Mexico is under intense pressure to stem the flow of U.S.-bound migrants by President Donald Trump, who has dangled repeated tariff threats on all Mexican exports if Lopez Obrador fails.

“I’m sure that better times are coming for all of us,” said Bukele, a 37-year-old entrepreneur of Palestinian descent who took office this month.

The grant will eventually exceed $100 million, officials said. They also announced the construction of what they called the biggest plant nursery in Mexico, expected to produce some 40 million plants and offer temporary jobs to some 2,500 migrants.

Two new shelters for migrant families with a capacity to hold 5,000 people are also part of the plans, according to a statement from Mexico’s ministry of well-being.

Migration loomed large over the announcements, especially the deal Mexico struck a couple weeks ago with the United States that commits it to reduce the flow of mostly Central American migrants within 45 days.

If Trump determines that Mexico’s efforts are insufficient, he has said he would consider reviving the tariff threat.

“We have the commitment, and we are going to meet it, to better control our border, on our southern border, to ask that those who enter (Mexico) register,” said Lopez Obrador.

But he also appeared to support those fleeing violence and bleak economic prospects back home.

“We have to see the migrant as a human being who is seeking a better life, better conditions to work and risking everything,” said Lopez Obrador, adding that those passing though Mexico will not be mistreated.

“And we will never encourage this rejection of foreigners,” he said to a smattering of applause.