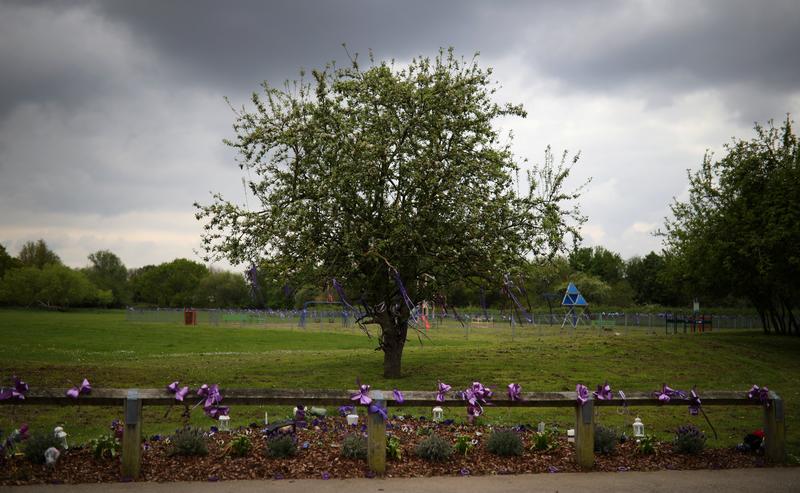 MANCHESTER, England/LONDON (Reuters) – A cluster of flowers and candles marks the spot where Jodie Chesney, 17, was stabbed in a park in east London in an attack with no obvious motive.

FILE PHOTO: Purple ribbons are seen tied to a tree and fence at a park near to where 17-year-old Jodie Chesney was stabbed to death in an attack with no obvious motive, in the Harold Hill area of London, Britain, April 29, 2019. REUTERS/Phil Noble

In honour of her favourite colour, purple ribbons have been tied to a railing, alongside a message also written in purple: “Choose life, drop the knife! RIP Jodie.”

Jodie’s memorial is one of dozens to be found on roadsides, parks and outside victims’ homes as Britain struggles to tackle a surge in knife crime.

In the year to March, knife crime offences rose 8% to a record high of around 44,000. London still has the most stabbings overall, but in some parts of Wales, North Yorkshire and East Anglia, the rate soared by over 25 percent compared to a year earlier.

The number of fatal stabbings rose to 285 in England and Wales in 2018, the highest level since records began more than 70 years ago.

Campaigners blame cuts to police, youth and mental health services. Often the perpetrators and victims are in still in their teens.

Yousef Makki, 17, was stabbed to death in Hale Barns, a village in Greater Manchester, in March this year. Earlier this month, another boy, also 17, was cleared of his murder. Makki’s family have protested against the verdict.

At the spot where Makki was stabbed along a residential road, people have left flowers and photos taped to a tree trunk.

More flowers and balloons mark the place outside a block of flats in London’s Hackney area where Joshua White, 29, was stabbed through the heart in broad daylight in April. Two teenagers have been charged with his murder, and police are attempting to extradite an 18-year-old from Ireland in relation to the attack.

Jodie Chesney’s father Peter is seeking to create a more permanent tribute to his daughter and is setting up the Jodie Chesney Foundation, a charity aimed at tackling knife crime.

“The whole idea is to turn something so bad into something good, and do what we can to help with the knife crime problem by educating people, trying to spread the word and change the culture,” he told Reuters.

Two men and two boys have been charged with her murder, which all four deny. The trial is due to start in September.

Patrick Green is chief executive of the Ben Kinsella Trust, a charity named after a schoolboy who was fatally stabbed in Islington, London, in 2008.

He said that the surge in offences committed with knives could lead to even more fatal incidents and showed that extra funding and measures taken to address root causes would take time to take effect.

“We just haven’t got a handle on this. For the sake of a quarter of an inch, in terms of a wound, that’s the difference between survival and death,” Green told Reuters.

Former PM Theresa May in March dismissed claims that an increase in police numbers would help solve knife crime. But Britain’s most senior police officer, Metropolitan Police Commissioner Cressida Dick, said there was a link.

The debate around the causes of knife crime often revolves around gang violence, but many of the victims are women attacked by men who know them.

Charlotte Huggins was the first stabbing victim of 2019, stabbed in the back at her home in south London in the early hours of New Year’s Day.

Her ex-boyfriend Michael Rolle was found guilty of her murder and jailed for life. He stabbed Huggins after she celebrated New Year’s eve with a male friend.

“This was a shocking display of violence borne out of jealousy and which resulted in a tragic murder,” Catherine Gould of the Crown Prosecution Service’s London Homicide unit said.

Ex-partner Aaron McKenzie has been charged with her murder and causing the death of the baby.

Outside the house where she was stabbed in Croydon, London, a pile of teddy bears and flowers had been left while the police cordon was still in place.