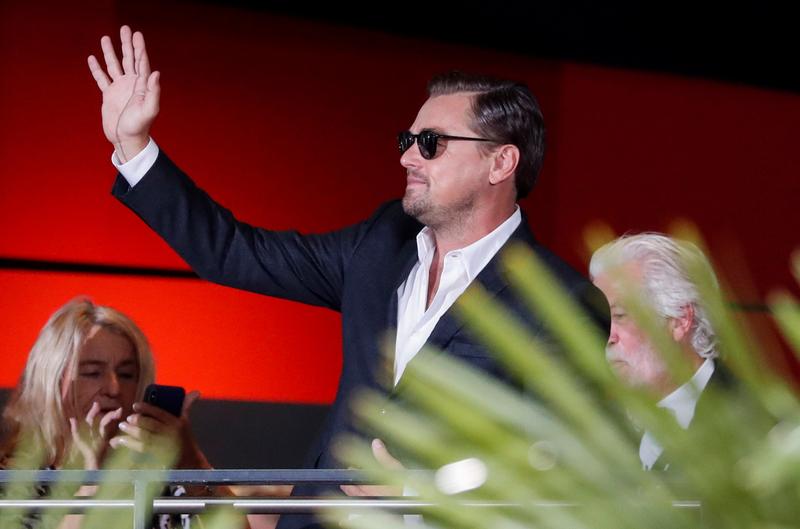 TOKYO (Reuters) – A crisis over burning forest in the Amazon is “incredibly tragic”, actor Leonardo DiCaprio said on Monday, urging governments to do more, amid growing international outrage over the damage to the world’s largest tropical rain forest.

Cast member Leonardo DiCaprio waves as he arrives for the Berlin premiere of “Once Upon a Time in Hollywood”,in Berlin, Germany, August 1, 2019. REUTERS/Fabrizio Bensch

A record number of fires is ravaging the rain forest, sparking concern because of the Amazon’s importance to the global environment. The rain forest is said to produce a fifth of the world’s oxygen.

DiCaprio was speaking a day after Earth Alliance, an initiative he founded with philanthropists Laurene Powell Jobs and Brian Sheth, launched a $5-million emergency fund to help preserve the rain forest.

“There is a major tragedy going on worldwide because of climate change and what’s going on in the Amazon, which is really the lungs of the earth and vital to protecting us in the future,” he told Reuters.

“We’re trying to perpetuate others to be involved, informed and contribute if they can,” he said, speaking on the red carpet at the Japan premiere of “Once Upon a Time in Hollywood”.

There have been more than 78,000 forest fires in Brazil this year, nearly double last year’s total. Environmentalists blame speculators who burn vegetation to clear it in hopes of selling the land to farmers and ranchers.

The government of Brazilian President Jair Bolsonaro has decided to send in the military to help fight the fires but was criticized for not doing enough sooner.

French President Emmanuel Macron, hosting the G7 summit in Biarritz, said the leaders of the world’s major industrialized nations were close to an agreement on how to help fight the fires and repair the devastation.

“The governments around the world, including Brazil, need to work together to make sure this doesn’t continue,” DiCaprio said.

DiCaprio, who visited Brazil two years ago to fight fires with a tribe there, said he planned to return to help again.

“What’s vital to protecting these forests is to protect the indigenous cultures there,” he added.