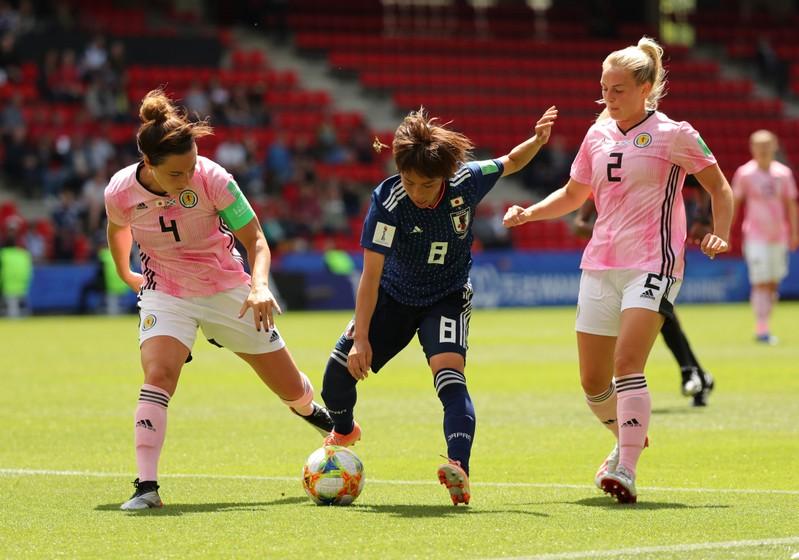 RENNES, France (Reuters) – Strikers Mana Iwabuchi and Yuika Sugasawa were on the scoresheet as Japan got their women’s World Cup campaign back on track with a 2-1 victory over Scotland in Rennes on Friday.

Japan, champions in 2011 and finalists four years ago, were coming off a uninspiring goalless draw with lowly-ranked Argentina in their opener but looked much sharper in the attacking third against Scotland.

They got a breakthrough when striker Iwabuchi controlled a poor headed clearance from Scotland captain Rachel Corsie before unleashing a powerful strike high into the net from 20 meters.

Sugasawa doubled Japan’s lead from the spot in the 37th minute after another defensive error from Corsie, who was penalized for tugging back the forward in the box.

It was one-way traffic at Roazhon Park as Japan continued to launch wave after wave of attacks, with midfielder Hina Sugita coming closest when her shot crashed into the crossbar just before half-time.

Shelley Kerr’s Scotland responded with a physical approach going forward in the second half and pulled one back through a curling effort from substitute Lana Clelland but Japan held on to the advantage to seal their first win of the tournament.

It was a second consecutive defeat for World Cup debutants Scotland, following a 2-1 loss to England in their opening match.