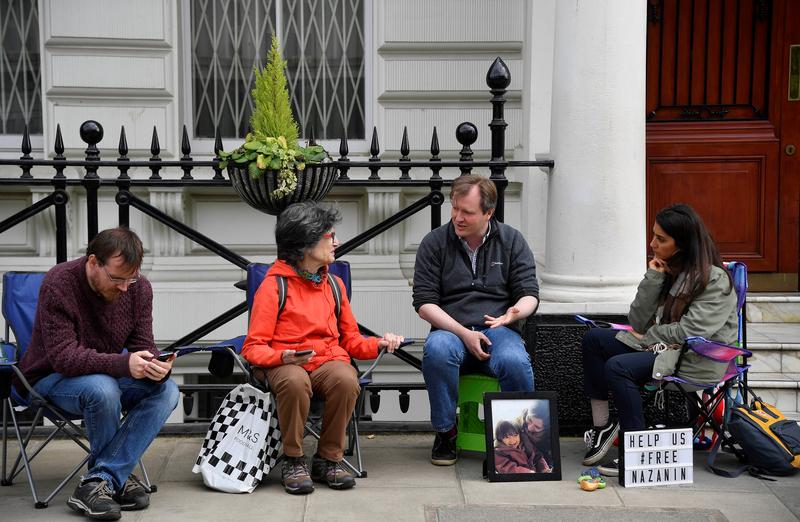 LONDON (Reuters) – A British-Iranian aid worker jailed in Tehran has begun a hunger strike to demand release, her husband said on Saturday, adding he would support her by fasting outside Iran’s embassy in London.

Richard Ratcliffe, the husband of jailed British-Iranian aid worker Nazanin Zaghari-Ratcliffe speaks with supporters as he stages a vigil and goes on hunger strike outside of the Iranian embassy in London, Britain, June 15, 2019. REUTERS/Toby Melville

Nazanin Zaghari-Ratcliffe, a project manager with the Thomson Reuters Foundation, was arrested in April 2016 at a Tehran airport as she headed back to Britain with her daughter after a family visit.

She was sentenced to five years in jail after being convicted of plotting to overthrow Iran’s clerical establishment, a charge denied by her family and the Foundation, a charity organisation that operates independently of Thomson Reuters and Reuters News.

“Today I received a phone call from Nazanin in prison. She had informed the judiciary that she has begun a new hunger strike – she will drink water – to protest at her continuing unfair imprisonment,” her husband Richard said in a statement.

“Today she sounded nervous, but calm. Her demand from the strike, she said, is for unconditional release. She has long been eligible for it.”

Britain has also called for her release, a demand repeated on Twitter by British Foreign Secretary Jeremy Hunt on Saturday. Her jailing has added further tension to Britain’s already strained ties with Iran.

Iran’s judiciary could not immediately be reached for comment. Tehran has previously said her case was in the judiciary’s hands.

Zaghari-Ratcliffe’s husband said he would stage a hunger strike outside the Iranian Embassy in London from Saturday.

In January, Zaghari-Ratcliffe went on hunger strike for several days in protest after her family said she was refused permission to see a doctor to examine lumps in her breast and to address other health issues.

Her family said she ended the hunger strike a few days later following a decision to grant her medical treatment.