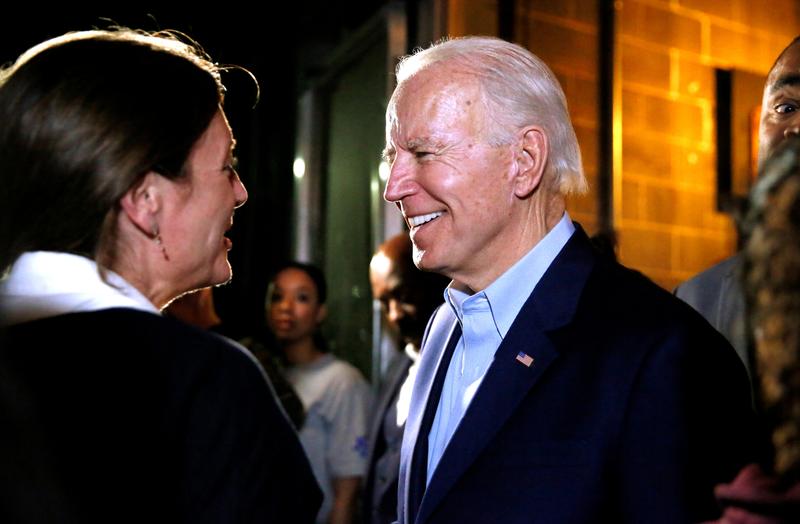 DALLAS (Reuters) – It was a scene that was hard to imagine just one week ago.

Joe Biden, 77, and until Sunday his rival for the Democratic presidential nomination Pete Buttigieg, 38, appeared together before a tiny crowd in the Chicken Scratch restaurant in Dallas, where Buttigieg endorsed the former vice president.

Fighting back tears, Biden compared the former mayor of South Bend, Indiana, to his late son Beau, saying it’s the highest compliment he could offer any person.

Having ditched his own bid for the nomination, Buttigieg, who had spent months calling for generational change, said Biden would “bring back dignity to the White House”.

Buttigieg’s endorsement was the most eye-catching among over 100 that flooded in for Biden from mostly moderate Democrats after his dominant South Carolina win on Saturday.

That victory gave Biden unexpected momentum going into the pivotal “Super Tuesday” contests of 14 states that will vote on the nominee to challenge Republican President Donald Trump in November.

New Biden backers also included U.S. Senator Amy Klobuchar of Minnesota, who ended her own presidential bid on Monday, as well as another former presidential rival, former Texas congressman Beto O’Rourke. Both endorsed Biden at his final rally in Dallas before voting begins in Texas and 13 other states on Tuesday.

Biden’s comeback in South Carolina, after poor showings in other early voting states, was exactly the kind of a victory that Democratic party officials, alarmed that front-runner U.S. Senator Bernie Sanders is far too liberal to beat Trump, had been craving, according to more than two dozen people who either gave their endorsements or were involved behind the scenes.

“I hadn’t planned on endorsing anybody, but then I started getting worried that Bernie Sanders would become the nominee,” said former Senator Barbara Boxer of California, a longtime Senate colleague of both Biden and Sanders.

On the eve of the South Carolina primary, she called Biden’s longtime aide Steve Ricchetti, telling him that she would endorse him if Biden won the race. Boxer then wrote up her own endorsing statement, sent it to the Biden campaign, and said the campaign could release it in the event of a victory.

“There was no plan, no pressure, nothing,” Boxer said.

People both inside and outside the Biden campaign said while the effort involved calls from Biden aides asking for help, most decided on their own.

“People woke up and got a sense of urgency,” said one person close to Biden.

When the two talked by phone after Buttigieg exited the race on Sunday night, Biden did not ask Buttigieg for his endorsement nor did Buttigieg say he was going to announce support, Biden said at the Texas chicken restaurant event.

The event, which lasted only a few minutes and involved a small crowd of press, campaign supporters and people who just happened to be at the restaurant, was hastily arranged to accommodate a quick, last-minute announcement, said one person familiar with the matter.

Just a day earlier on Sunday evening, former President Barack Obama, to whom Biden served as No.2 for eight years, called Buttigieg amid reports he was exiting the 2020 race, according to two people aware of that phone call.

Obama did not explicitly ask Buttigieg to endorse Biden, the people said, but emphasized the historic nature of his bid and the leverage it carries. Buttigieg, the first openly gay presidential candidate, won Iowa’s first-in-the nation’s caucuses and came a close second behind Sanders in New Hampshire’s primary in February.

Buttigieg, who once volunteered for Obama’s election, understood the ties between Obama and Biden.

“It was unsaid,” said one of the two sources, who asked for anonymity. Representatives for Obama could not be reached for comment.

No matter how they came to join a sudden and growing army of endorsers for Biden, each backer had one thing in common: a desire to stop the surge of the self-described Democratic socialist Sanders.

Most believe the senator from Vermont, who champions economic justice and universal government-run healthcare in place of private insurance, will not only lose to Trump, but could dash Democratic hopes of regaining the Senate and even cede control of the House of Representatives to Republicans.

Former Democratic Senate majority leader Harry Reid of Nevada, still an influential figure in the party, told Reuters he could no longer stand idle, faced with the prospect of a Sanders nomination.

On Sunday night, Reid called Ricchetti, who was traveling with Biden on a plane, and told them he was ready to endorse.

“If my friend Bernie Sanders gets the nomination, Trump will beat him,” Reid said.

California House freshman Gil Cisneros said the endorsement of Biden by James Clyburn, an African American South Carolina congressman and the third most senior Democrat in the House, was a big factor in her decision to fall in line.

The majority of South Carolina primary voters said Clyburn’s backing was an important factor, according to Edison Research exit polls, which showed Biden with 61% of African-American support to Sanders’ 17%.

“Hopefully we can all give Biden a boost, not just California, but in all the Super Tuesday states,” Cisneros said.