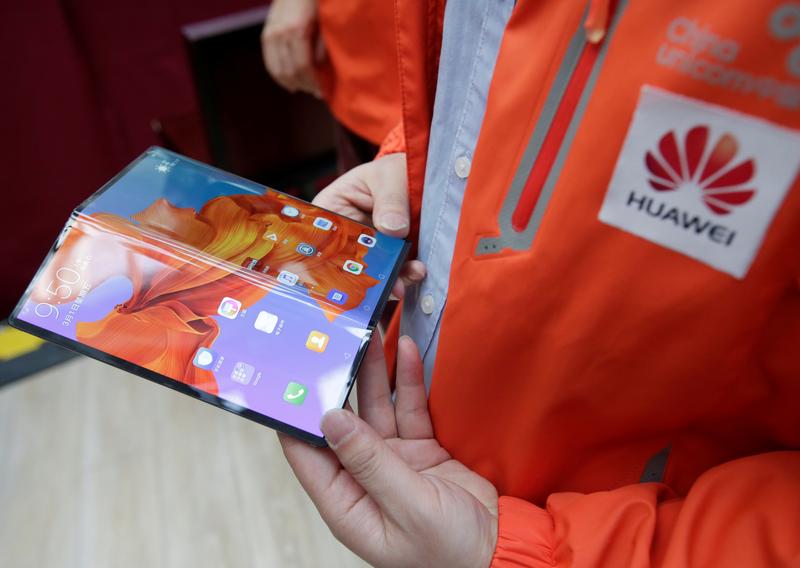 HONG KONG (Reuters) – Huawei will delay the launch of its much-touted foldable 5G Mate X smartphone by three months, the latest setback for the company that was slapped with U.S. sanctions last month.

The Mate X, a competitor to Samsung Electronics’ Galaxy Fold, is expected to be rolled out globally in September, Vincent Pang, Huawei’s head of corporate communications, said on the sidelines of the WSJ Tech D.Live conference in Hong Kong.

It was originally slated for a June launch.

The delay comes as Huawei phones face being cut off from updates of Google’s Android operating system (OS) in the wake of the U.S. blacklist that bans American companies from doing business with the Chinese firm.

Pang, however, denied the delay was due to the ban, saying Huawei was in the process of running certification tests with various carriers that were expected to be completed in August.

He also told Reuters that Huawei, the world’s second-largest maker of smartphones, could roll out its Hongmeng operating system (OS) – which is being tested – within nine months.

“Our preference will of course be Google and Android as we have been partners for many years,” said Pang, also a senior vice president at Huawei. “But if the circumstances force us to, we can roll out Hongmeng in six to nine months.”

Hongmeng is based on the version of Android that is publicly available via open-source licensing and is mainly meant for phones, Pang said. Hongmeng will support other devices later.

Alphabet Inc’s Google has earlier said it would no longer provide Android software for Huawei phones after a 90-day reprieve granted by the U.S. government expires in August.

Huawei has applied to trademark its Hongmeng OS in various countries, Reuters reported on Thursday, in a sign it may be deploying a back-up plan in key markets.

At home, Huawei applied for a Hongmeng trademark in August last year and received a nod last month, according to a filing on China’s intellectual property administration’s website.

Pang denied recent media reports that Huawei was cancelling the roll out of its next new laptop and said it will still launch at a later date.

Huawei has come under mounting scrutiny for over a year, led by U.S. allegations that “back doors” in its routers, switches and other gear could allow China to spy on U.S. communications.

The company has denied its products pose a security threat.

However, consumers spooked by how matters have escalated are offloading their devices amid Android worries.

Huawei’s hopes to become the world’s top-selling smartphone maker in the fourth quarter this year have now been delayed, a senior Huawei executive said this week.

Problems at Huawei, the world’s largest network-equipment maker, are spilling over to the broader chip industry.

Broadcom Inc has warned of a broad slowdown in chip demand, blaming the U.S.-China trade conflict and export restrictions on Huawei, and cut its revenue forecast for the year by 8%. Huawei accounted for about or 4% of the company’s overall sales last year.

Micron Technology Inc’s CEO Sanjay Mehrotra said at the WSJ conference on Friday that the ban on Huawei brings “uncertainty and disturbance” to the semiconductor industry.

Mehrotra said Micron was assessing impact from the ban on Huawei, one of its largest customers.