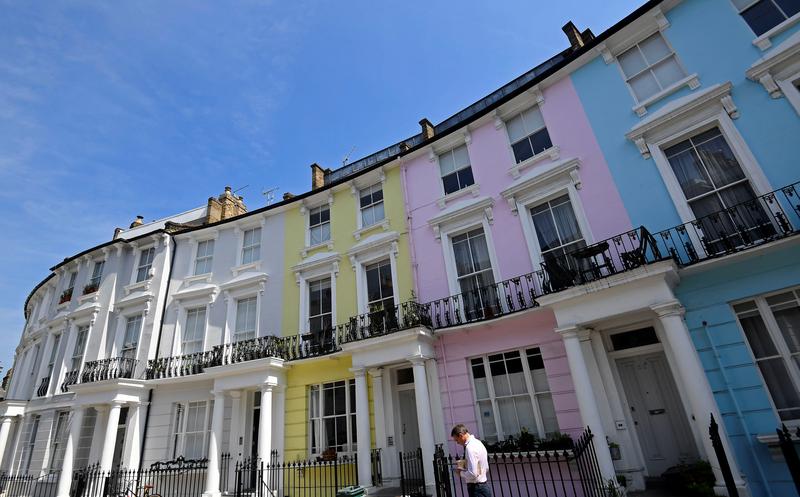 LONDON (Reuters) – Britain’s drifting property market would probably take a hit from a disorderly Brexit, with average prices slipping about 3% nationally in the ensuing six months and as much as 10% in London, a Reuters poll of housing experts found.

FILE PHOTO: A man walks past houses painted in various colours in a residential street in London, Britain, May 15, 2019. REUTERS/Toby Melville

Roughly 85% of respondents said both UK and London house prices would fall in the six months subsequent to leaving the European Union without an agreement.

But if Britain departs the EU with a transition deal – the scheduled leave date is Oct. 31 – house prices are due a mild 1.5% lift over the following two quarters. They would rise 1.4% in the capital.

Results from the Aug. 13-20 survey show an otherwise tepid outlook for national price rises in coming years, at rates not far off an already-mild consumer price inflation rate and despite the recent sharp fall in sterling.

Indeed, the results suggest that foreign demand for property will be weaker than in previous years where declines in the pound have spurred buying, particularly in London, as it makes housing cheaper for those holding stronger currencies.

The survey also indicates in the near-term at least that housing, the bedrock of British household wealth, is not likely to give a lift to the economy, which contracted for the first time in 6-1/2 years in the second quarter.

Indeed, an overwhelming majority of respondents who answered an additional question in the first Reuters UK housing market survey since Boris Johnson took over as prime minister said risks to the housing market were skewed to the downside.

“Despite the new PM and team in government there are big icebergs ahead, not least the apparent willingness to leave the EU without a deal,” said property market consultant Henry Pryor. “This is likely to spook the markets before it reassures them.”

At the same time, there are fundamentals cushioning the market from falls. Hansen Lu, analyst at consultancy Capital Economics, notes the ongoing shortage of homes, which nearly always underpins British house prices.

Mortgage rates are also very low and not set to rise any time soon despite hawkish rhetoric in past months from Bank of England policymakers, and recent wage gains have lifted household spending power somewhat.

“Both factors are helping to prevent the current slump in house price growth from developing into an outright fall in prices. Yet on the other hand, Brexit uncertainty, as well as the high level of house prices relative to incomes, continues to weigh on buyer demand,” said Lu.

Others, like Tony Williams of Building Value, are more sanguine about the overall housing market’s prospects following Britain’s impending departure from the EU, no matter how rough.

“With no-deal, there will be a knee jerk action in which demand will fall followed by prices over the first six months of the UK’s new status,” notes Williams. “That said, life after a no-deal Brexit will revert to type.”

London house prices, already down 5% from their recent peak, are due to fall 2.0%. They are not due to rise at all next year, followed by a 2.0% lift in 2021, a slightly weaker view than what was predicted a few months ago.

Capital Economics’ Lu notes that with these recent falls and some recent wage gains outstripping inflation, London’s average house-price-to-earnings ratio has slipped to 12 times from a recent peak of 13.4.

“That adjustment, while welcome, is still small relative to past house price gains. With Brexit uncertainty set to bite further and mortgage interest rates at their floor, we think London’s fall in house prices has further to run.”