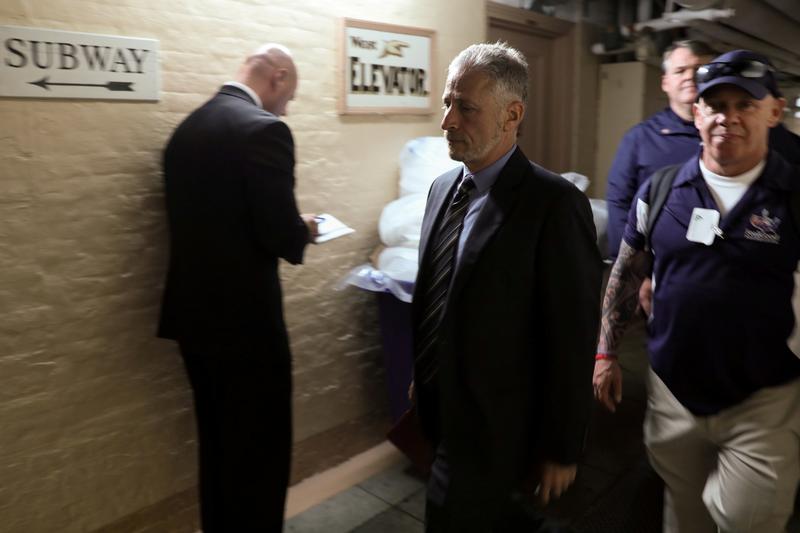 WASHINGTON (Reuters) – A U.S. congressional committee on Wednesday unanimously approved legislation to extend the fund compensating first responders to the Sept. 11, 2001, attacks on the World Trade Center for the next 70 years, a move that would avoid steep benefit reductions over a lack of money.

FILE PHOTO: Comedian Jon Stewart, who earlier had testified before a House Judiciary Committee meeting on benefits for 9/11 first responders and victims, walks between meetings at the U.S. Capitol in Washington, U.S. June 11, 2019. REUTERS/Jonathan Ernst/File Photo

The House Judiciary Committee acted one day after television personality and comedian Jon Stewart castigated lawmakers at a hearing for their slow response to helping New York City firefighters, police officers and other emergency personnel who rushed to the scene of the attacks that left two of Manhattan’s most well-known skyscrapers in rubble.

The fund also helps construction workers and victims of the attack.

“Your indifference costs these men and women their most valuable commodity – time,” Stewart said to a hearing room packed with lawmakers and first-responders, including those now suffering from cancer, respiratory problems and other serious health issues as a result of inhaling contaminated air nearly 18 years ago.

Before Wednesday’s vote, House Judiciary Committee Chairman Jerrold Nadler, whose constituents live in New York City, said that despite federal officials’ statements that the air was safe in the aftermath of the attack, “more than 95,000 responders and survivors are sick.”

The bill, which next goes to the full House for debate, would extend the victims’ compensation fund to 2090, putting it on the same terms as a health program for World Trade Center victims. It also would reverse any benefit cuts due to insufficient funds.

On Tuesday, Senate Majority Leader Mitch McConnell was asked by a reporter whether he would advance the legislation.

“I hadn’t looked at that lately. I’ll have to. We’ve always dealt with that in a compassionate way and I assume we will again,” McConnell said.

In the past, some lawmakers have complained about the cost of helping 9-11 victims at a time of severe U.S. budget deficits.

“It’s shameful. There’s no other word for it. Shameful, that our brave first responders have had to suffer the indignity of delay after delay after delay,” Schumer said in a speech to the Senate.