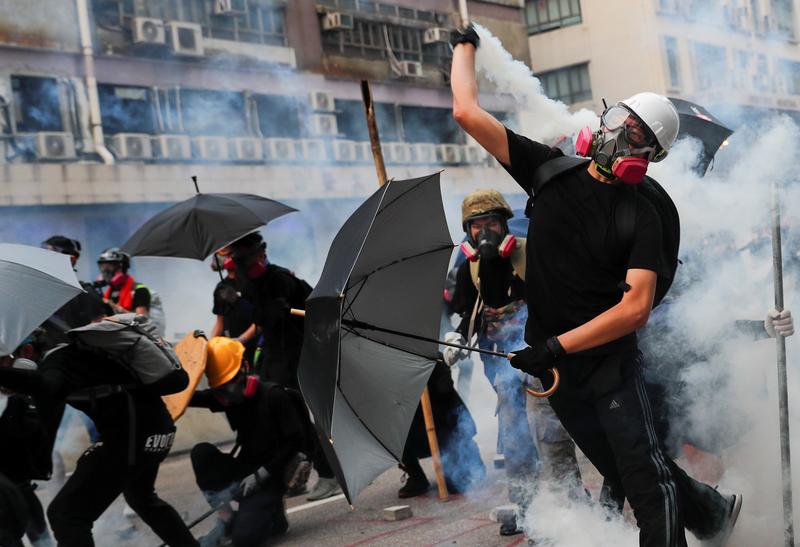 Four MTR subway stations were closed around Kwun Tong, a densely populated area of the Chinese-ruled city on the east of the Kowloon peninsula, but thousands packed the streets anyway, most carrying umbrellas against the sun.

Police used tear gas after some protesters threw Molotov cocktails and bricks and others tore up “smart” lamp posts equipped with surveillance cameras. Others had set up roadblocks with bamboo scaffolding.

It was the first use of tear gas in 10 days after a series of mostly peaceful demonstrations in the former British colony.

There were no immediate reports of injuries.

“Give me democracy or give me death,” was spray-painted on a wall, an illustration how the demands of the protesters have expanded beyond the withdrawal of a bill that would have allowed extraditions to China.

The government said in a statement the protesters “posed a serious threat to the safety of everyone” at the scene.

“After repeated warnings to the protesters…, police officers deployed tear gas and minimum force to disperse protesters,” it said.

There were sporadic, smaller protests elsewhere in the territory which continued after nightfall. Police fired tear gas in a running battle with protesters blocking a highway in the Wong Tai Sin district, to the northwest of Kwun Tong.

The airport and the roads and railways leading to it operated normally despite plans by protesters to implement a “stress test” of transport links after weeks of unrest.

The airport was forced to close last week after protesters thronged the main terminal for several days, grounding around 1,000 flights and occasionally clashing with police.

The wider calls for democracy have plunged the city into an unprecedented crisis posing a direct challenge for Communist Party leaders in Beijing.

One Kwun Tong protester showed off a tattoo on her arm which read “Hong Kong add oil”, a common encouragement for the protest movement.

“I love Hong Kong very much. Even though I may not come out to protest regularly, I still want to mark down this moment,” Bu Chan, 25, told Reuters.

A demonstrator throws back a tear gas canister as they clash with riot police during a protest in Hong Kong, China, August 24, 2019. REUTERS/Tyrone Siu

British consulate staffer Simon Cheng was detained for 15 days for violating public security management regulations, police in Shenzhen, across the border from Hong Kong, said on their Twitter-like Weibo account.

No details were given of his detention, with the Facebook post asking the “media and friends to give them some time and space, and we will explain more later”.

Some protesters in recent days had demanded Cheng be released. Britain said it welcomed the news.

Cathay Pacific Airways, which has become the biggest corporate casualty of the protests after China demanded it suspend staff involved in the demonstrations, protested against a planned rally by the Hong Kong Confederation of Trade Unions around the airport’s “Cathay City” HQ on Monday.

“We have also reiterated to our employees that there is a zero-tolerance approach to any support for or participation in illegal protests, violent activities or overly radical behavior,” it said in a statement.

There is no sign of a let-up almost three months after the anti-government demonstrations began. On Friday night, thousands of chanting protesters formed human chains around the city in a peaceful protest dubbed the “Hong Kong Way”.