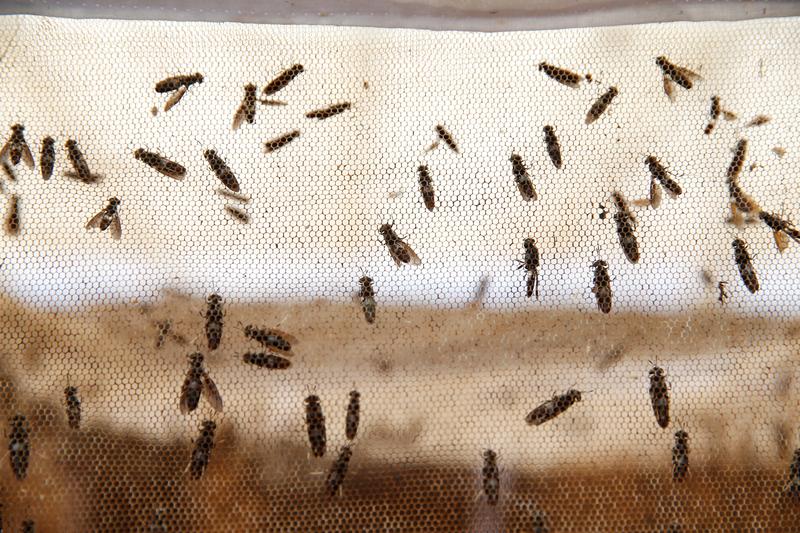 NAIROBI (Reuters) – Kenyan farmer Victor Kyalo’s chickens have doubled the number of eggs they are laying. The reason: Human excrement.

He is feeding them food from a Nairobi-based organics recycling company. Sanergy harvests waste from toilets it operates in a franchise network in Nairobi’s sprawling slums and feeds it to fly larvae, which become high-quality animal feed.

Kyalo says his customers have noticed the difference in the past three weeks: yellower yolks and larger eggs.

“Before we were getting like five trays (of eggs) per day, but now we are getting 10,” Kyalo said. “It’s kind of perfect for me.”

As the world looks to feed 10 billion mouths by 2050, businesses harvesting insects — either for human consumption or as animal feed — are growing. They promote themselves as a greener alternative to traditional feed such as soybeans, whose cultivation can lead to deforestation and the overuse of farm chemicals.

In developing countries like Kenya, where the World Bank says nearly two-thirds of urbanites live in slums, feeding waste to fly larvae could solve both sanitation and nutrition problems.

Faeces from more than two-thirds of Nairobi’s inhabitants go untreated because there are not enough toilets. Many others are not cleaned out regularly, Nairobi City Water and Sewerage Company said.

During the rains, they often overflow, polluting local waterways. That can make workers ill. Days off slow Kenya’s economy by around 1% annually, its Health Ministry said.

FROM LOO TO FOOD

Lilian Mbusia runs one of Sanergy’s franchises, charging residents of Mukuru Kwa Ruben slum in the south of the city 5 Kenyan shillings (5 U.S. cents) to use her blue “Fresh Life” toilets.

Nestled beneath her squat-toilets are small blue barrels that, once full, are sealed and taken to an organics recycling factory in Machakos County, a bumpy 40-minute drive outside the city.

Beds of writhing black soldier fly larvae feast on a mix of excrement and food waste from hotels and agri-businesses.

That produces two products for farmers: fertilizer and animal feed.

In 10 days the larvae munch their way through 70% of the waste, leaving behind a manure laden with nitrogen and calcium, which becomes organic fertilizer.

Once the recycling plant is expanded later this year, Auerbach said it will provide 400 tonnes of fertilizer. Larvae production will ratchet up from 7 tonnes to 300 tonnes per month.

“Right now we are receiving equity debt, and grant investment to scale up operations,” Auerbach said. “We’re on track for profitability by the end of 2020.”

The plump white larvae are boiled in hot water to kill off pathogens, Michael Lwoyelo, managing director of Sanergy, said.

The larvae are then sold to animal feed millers, who grind them into powder mixed with other ingredients to create a balanced diet for poultry, pigs and fish.

Frederick Wangombe, an animal nutritionist at Unifeed, a Kenyan animal feed miller that uses Sanergy’s black soldier fly product, envisages it replacing fish meal from Lake Victoria, which can contain sand and other impurities, or expensive soy beans from Zambia.