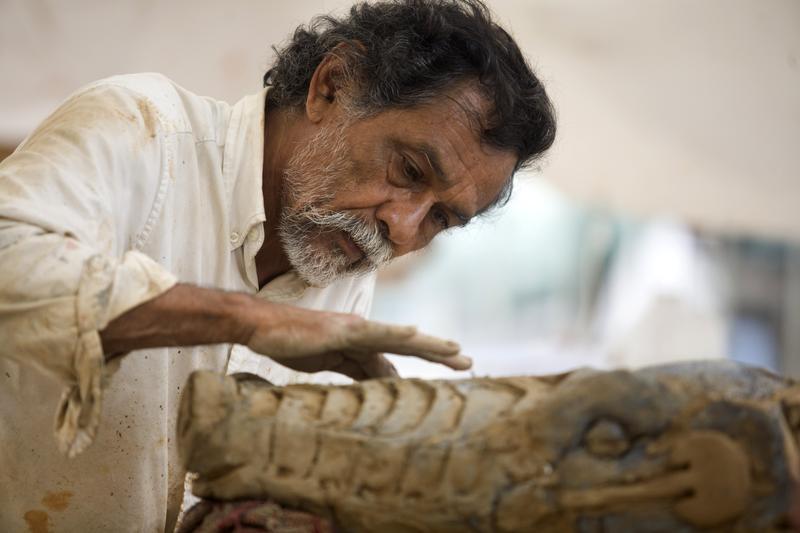 MEXICO CITY (Reuters) – Francisco Toledo, who shook up the 1960s Mexican art scene with his fresh approach to painting, sculpting, printing, tapestry weaving and preserving the cultural heritage that inspired him, has died.

Toledo’s work, full of monkeys, insects and skeletons in earthy tones, reflected his indigenous background and love of nature. It also marked a departure from the muralists who were heavily inspired by civil conflicts that dominated the scene for most of the first half of the 20th century.

With his messy hair, scruffy clothes and penchant for huaraches, or leather sandals, Toledo was a fierce defender of the culture of his home state, Oaxaca, the heartland of the indigenous Zapotec people and where he died on Thursday at 79.

His paintings often featured amate, a pre-Hispanic paper made of tree bark, and elements of Oaxaca’s heritage, which incorporates grasshoppers into everyday meals.

A father of five children, who include renowned tattoo artist Dr. Lakra, conceptual artist Laureana Toledo and poet Natalia Toledo, he remained true to his origins despite international recognition from Tokyo to New York.

Growing up in the Zapotec town of Juchitan and moving frequently as a child, Toledo first arrived in Oaxaca at the age of 12 to study at the same institute attended by Mexico’s first indigenous president, Benito Juarez.

“My father had grandiose plans for me; he wanted me to be Benito Juarez,” Toledo told Reuters, adding that he transferred to an arts school when a relative noticed him drawing while doing his homework.

He went on to work and exhibit in the 1960s in Paris, where he was taken under the wing of Mexican modern master Rufino Tamayo, a fellow Oaxacan with Zapotec roots.

Oaxacan painter Guillermo Olguin, a neighbor of Toledo, called him “perhaps the most talented, generous and mystical Mexican artist of an entire generation.

“With his leadership… and sophistication he put the eyes of the world on a small state like Oaxaca, putting it on the map as an epicenter of art and resistance.”

Auction house Christie’s said on its website that it sold one of Toledo’s pieces, created in 1975 and titled “Tortuga poniendo huevos,” Spanish for “Turtle laying eggs,” for just over $1 million in 2018.

He led campaigns to preserve the state’s heritage, fighting to prevent the construction of hotels, new roads and the opening of a McDonald’s restaurant in the main square of the state capital. Toledo also helped stop a project to install a cable car in Monte Alban, one of Mexico’s most striking archaeological sites.

“The art world is mourning,” Mexican President Andres Manuel Lopez Obrador said on Twitter. “The master Francisco Toledo, Oaxacan, incredible painter and extraordinary cultural promoter, a true defender of nature, customs and traditions of our people, has passed away. Rest in peace.”

In 2005, Toledo was awarded the Right Livelihood Award, also known as Sweden’s alternative Nobel prize, “for devoting himself and his art to the protection and enhancement of the heritage, environment and community life of his native Oaxaca.”

“My parents are migrants; I’m more from the city than the country, but I always knew what the country was,” he said in an interview with El Pais. “And from there comes what I paint, though I do not come from a primitive world.”