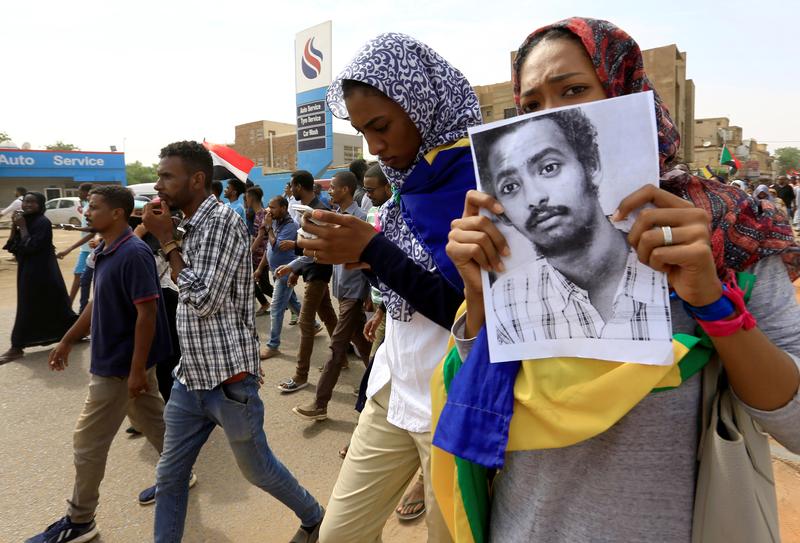 KHARTOUM (Reuters) – At least four protesters were killed and many injured by gunfire in the Sudanese city of Omdurman on Thursday, opposition medics said, as hundreds of thousands took to the streets to pile pressure on the country’s military rulers.

People demonstrate against the killing of protesting children, who were shot dead when security forces broke up a student protest in Khartoum, Sudan August 1, 2019. REUTERS/Mohamed Nureldin Abdallah

Organizers had called for a million-person march in cities across Sudan in response to the killing of young protesters in El-Obeid, southwest of the capital Khartoum, earlier this week.

Sudan has been gripped by months of political turmoil that climaxed in the army overthrowing long-time leader Omar al-Bashir in April. Protesters have kept up their rallies since then, pressing the army to hand over to civilians, accusing the security services of violence and decrying the shortages and economic hardships that triggered the unrest in the first place.

Thursday’s killings, reported by the Central Committee of Sudan Doctors, one of the main protest groups, came as opposition leaders said there had been some progress in talks with the military on a deal to form a new government after Bashir’s ousting.

Despite signing a deal in July which secured a three-year transition period and a joint sovereign council with a rotating leadership, talks over the wording of a constitutional declaration on the changes have stumbled.

“The agreement is really now just around the corner,” Satea al-Hajj, a leader in the Forces of Freedom and Change (FFC) coalition of opposition groups, said in a press conference in Khartoum on Thursday.

Negotiations were set to restart later on Thursday, the spokesman for the military council said.

The opposition had demanded that members of the sovereign council, which is intended to lead the country until elections are held, should not be granted blanket immunity from prosecution for past crimes. But FFC leaders said on Thursday they had agreed that they could be granted only ‘procedural immunity’ – meaning top officials could be tried with the permission of two-thirds of the legislative council.

The opposition leaders said both sides also agreed another key point, reaffirming that the parties included in the FFC would have 67% of the legislative council while the rest will be granted to other opposition and political groups.

Sudan’s ruling military council did not immediately confirm the details of the agreements.

In Omdurman, across the Nile from Khartoum, protesters chanted “it’s too bad, it’s too bad, we don’t have an army,” expressing anger at the army for not protecting protesters.

The FFC has accused military and paramilitary forces of firing on the high school pupils as they protested over bread and fuel shortages in El-Obeid on Monday.

The Sudanese Professionals Association (SPA), the main protest group and a leading voice in the FFC, accused the military of failing to protect civilians and of attempting to prevent “the masses from achieving the goals of the revolution.”

A senior army commander said a security force assigned to guard a bank was responsible for killing children protesting near there, the official SUNA news agency reported on Thursday. The bank guards were a government security force.

Opposition groups have also accused the main paramilitary group, the Rapid Support Forces, of killing scores of protesters since Bashir was ousted and the RSF’s role remains a point of contention.

The FFC said on Thursday that the RSF should be merged into the armed forces, a proposal opposed by Sudan’s ruling generals, said al-Hajj.