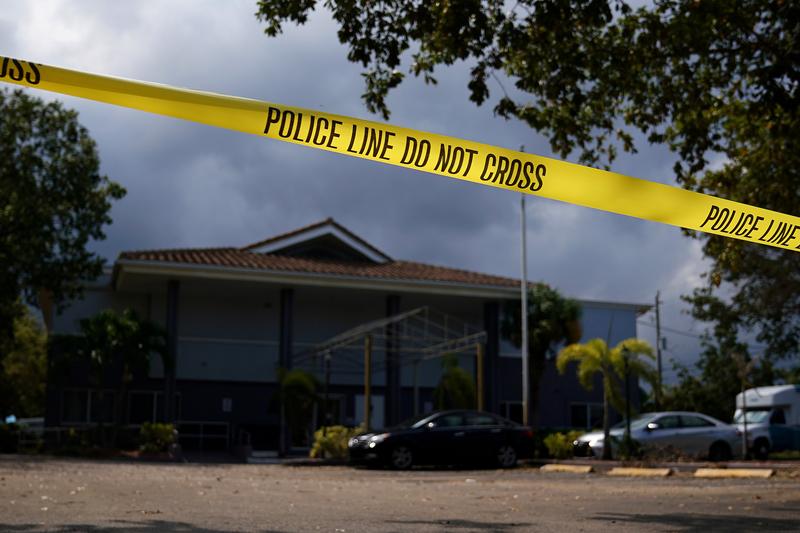 MIAMI (Reuters) – Four Miami-area nursing home workers were due to make their first court appearance on Tuesday to face charges stemming from the 2017 heat-exposure deaths of a dozen patients after Hurricane Irma knocked out the facility’s central air conditioning.

Three employees of the now-closed Rehabilitation Center at Hollywood Hills, including its administrator, Jorge Carballo, surrendered to police at the Broward County Jail in nearby Fort Lauderdale on Monday, their lawyers said.

Carballo, 61, and Sergo Colin, 45, the supervising nurse on duty at the time, were each booked on 12 counts of aggravated manslaughter by neglect of an elderly, disabled adult, jail records show.

Another nurse who surrendered on Monday, Althia Meggie, 36, was charged with two counts of manslaughter and two counts of evidence tampering.

A fourth defendant, a nurse identified as Tamika Miller, was arrested by police in Miami, said the lawyers, David Frankel and Lawrence Hashish. Jail records show Miller was booked on Saturday, but it was not clear what charges she faced.

Arrest warrants for all four were issued over the weekend in the deaths, which the Broward County coroner ruled homicides, lawyers said. Bond hearings for the defendants were set for Tuesday morning before a Broward County judge, they said.

Police Chief Chris O’Brien of Hollywood, Florida, a city about 40 miles north of Miami, scheduled a news conference for Tuesday morning to discuss the case.

Defense lawyers said their clients were innocent of criminal wrongdoing and did their best to care for the victims, all of them in frail health, under extremely difficult, unpredictable circumstances posed by a major natural disaster.

Frankel said most of the dead had been under hospice care, and that moving them would have proven medically risky.

The 12 victims, ranging in age from 57 to 99, were found to have died from heat exposure after being left with little or no air-conditioning in the nursing home for days after Irma knocked out power to the facility’s cooling system on Sept. 10, 2017.

A criminal investigation was launched almost immediately after the first deaths were reported in the aftermath of Irma, one of the most powerful Atlantic storms on record, which killed more than 80 people in the Caribbean and on the U.S. mainland.

Numerous civil lawsuits have also been filed accusing the nursing home company, its owners and various employees of negligence in the tragedy.

Portable air coolers and fans were placed throughout the building but were ineffective in curtailing the heat, authorities said.

An evacuation described by medical workers as chaotic was finally carried out on the third day after the storm, as residents in the overheated building began lapsing into cardiac arrest.

Days later, state regulators suspended the facility’s license after determining that medical personnel had delayed in calling for emergency assistance when temperatures inside reached excessive levels. The center was subsequently closed.

Of more than 140 patients who ultimately moved to an adjacent hospital, most were treated for respiratory distress, dehydration and other heat-related ailments, hospital officials said. Some patients registered body temperatures ranging from 107 degrees to 109.9 Fahrenheit (41.7 to 43.3 Celsius), state investigators said. Average normal human body temperature is 98.6 degrees F (37 Celsius).