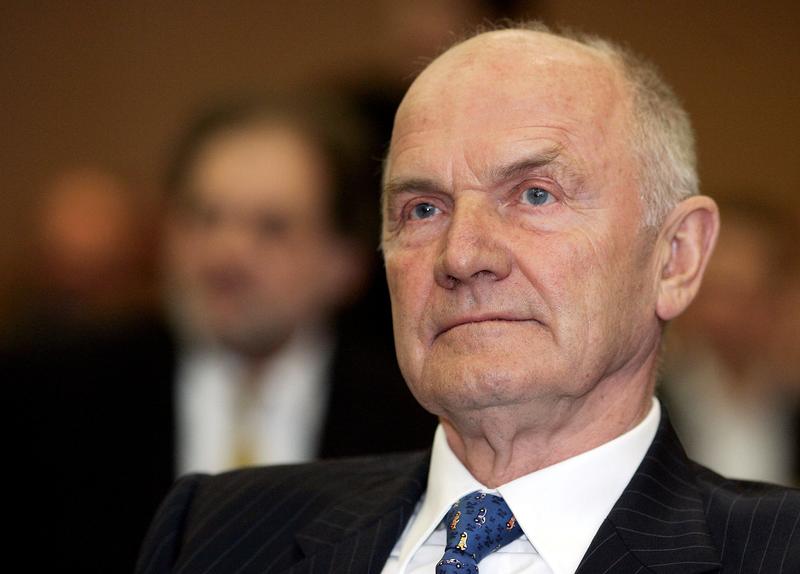 FRANKFURT (Reuters) – Ferdinand Karl Piech, Volkswagen AG’s (VOWG_p.DE) former chairman and chief executive, who transformed the German company from a struggling midsized carmaker into a global automotive powerhouse, has died, his wife said in a statement.

FILE PHOTO: Ferdinand Piech, chairman of the supervisory board of German car manufacturer Volkswagen AG, waits for the start of a trial at the district court in Brunswick (Braunschweig) January 9, 2008. REUTERS/Fabian Bimmer/Pool

Piech, 82, who had 13 children by four different women, died suddenly on Sunday, his wife Ursula said.

A brilliant engineer, Piech turned around VW after betting on a modular construction technique which allowed Audi, Skoda and VW brands to share up to 65% common parts, helping Volkswagen Group, the world’s largest carmaker by sales, to attain greater economies of scale.

“The life of Ferdinand Piech was shaped by his passion for automobiles and for the employees that create them. He remained an enthusiast engineer and car lover until the end,” Ursula Piech said in the statement.

Under Piech’s leadership, VW emphasised engineering brilliance ahead of profits, and went on an expansion spree, acquiring high-margin luxury marques Bentley, Bugatti and Lamborghini in a single year.

“First and foremost I always saw myself as a product person, and relied on gut instinct for market demand. Business and politics never distracted me from the core of our mission: to develop and make attractive cars,” Piech wrote in his autobiography.

For his entire career Piech took huge risks as a way to eclipse his grandfather, Ferdinand Porsche, the father of the iconic Volkswagen Beetle as well as the founder of the sportscar manufacturer which still bears his name.

Family members accused Piech of misconduct due to his risk appetite and willingness to bet the company’s budget on a single vehicle, but the Porsche 917 went on to become one of the most successful racecars in history, cementing his status as a visionary engineer.

During his nine-year tenure as CEO, Piech turned a loss equivalent of 1 billion euros ($1.1 billion) into a 2.6 billion euro profit while spearheading VW’s’ expansion into a 12-brand empire that includes the Seat, Skoda, Bentley, Audi, Porsche and Ducati brands in addition to the MAN and Scania truck businesses.

“Most of all Ferdinand Piech brought perfection and attention to detail to automotive production and into Volkswagen’s DNA,” Diess said.

Piech was known for his ability to outmanoeuvre competitors by stoking internal rivalries to his own advantage, even if it resulted in backing labour leaders to the detriment of his own managers.

The angrier he got, the calmer he spoke, uttering only short deliberate answers which revealed only a fraction of his plan.

“It is not possible to take a company to the top by focusing on the highest level of harmony,” Piech said in his book.

Some of Piech’s top lieutenants were prosecuted for securing support for restructuring plans by sponsoring lavish business trips and brothel visits for the company’s labour leaders, who had the power to block the changes.

“I remember Ferdinand Piech as a great manager and engineer,” Volkswagen’s labour chief Bernd Osterloh said on Tuesday. “With his love for products, strategic vision, far sightedness and his ability to develop our brands he forged the success of our company.”

Governance at VW was for decades marked by a cutthroat management style which did not tolerate failure, a culture that was later blamed for causing VW managers to lie about illegal emissions, rather than admitting that their cars could not meet clean air rules.

The scandal, which Piech was not associated with, has cost Volkswagen more than 30 billion euros in lawsuits and fines.

Piech became Volkswagen’s chief executive in 1993 and chairman in 2002, reviving the VW brand by introducing sophisticated technologies into even small cheap cars, relying on the company’s procurement prowess to raise profits.

VW was accused of stealing procurement know-how from General Motors under Piech’s watch but he was never charged with a crime.

He also cultivated unconditional loyalty from his top engineers, even while sometimes keeping them in the dark.

While working as development chief at Audi, Piech decided to hide the aerodynamic qualities of the Audi 100 from his top staff by using wind tunnels in Hamburg, Stuttgart, Wolfsburg and Turin to develop the vehicle.

He wanted to take the brand upmarket by touting its aerodynamic qualities, but was fearful that an engineer could defect to a rival with crucial know-how, so he ensured that only he had the full picture.

“I was in the middle of it all, putting together the pieces of the puzzle,” Piech said in his autobiography.

Piech introduced quattro four-wheel drive technology to Audi, and transformed it into a credible competitor to Mercedes-Benz and BMW.

Max Warburton, an analyst at Bernstein Research, described Piech as the architect of VW’s global success.

“His stewardship of VW has been indisputably successful. Piech will go down in history as an automotive legend, in the same class as Gottlieb Daimler, Henry Ford and Kiichiro Toyoda,” Warburton said in a 2012 note.

Piech, resigned as Volkswagen chairman in April 2015 after falling out with his chief executive Martin Winterkorn. The emissions cheating scandal would erupt only months later.