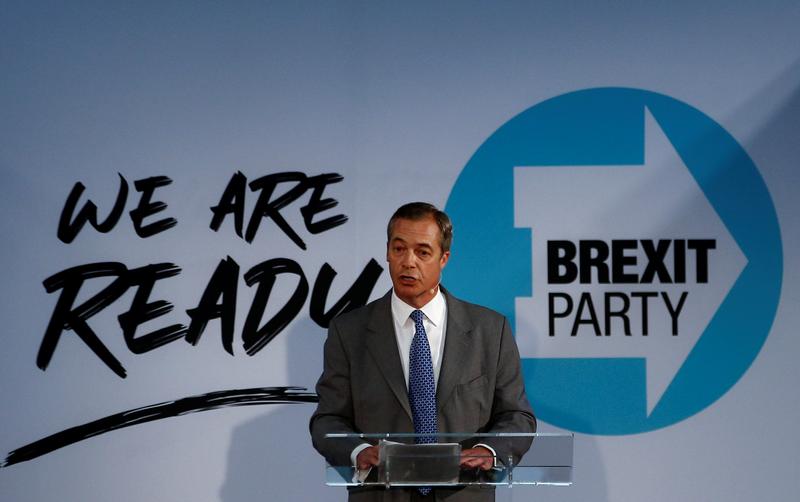 LONDON (Reuters) – Brexit Party leader Nigel Farage offered British Prime Minister Boris Johnson an electoral pact if he goes for a no-deal EU exit, but warned that if he tried to fudge Brexit then he would face a battle over every seat at the next election.

More than three years since the United Kingdom voted 52-48% to leave the European Union, Brexit remains up in the air: Options range from an acrimonious divorce on Oct. 31 and an election to an amicable exit or even another referendum.

The United Kingdom is heading towards a constitutional crisis at home and a showdown with the EU as Johnson has vowed to leave the bloc without a deal unless it agrees to renegotiate a Brexit divorce.

Farage, who in 2013 piled so much pressure on then Prime Minister David Cameron that he promised an EU referendum, said that unless Johnson went for a no-deal Brexit he would face an electoral challenge in every parliamentary seat.

He said there was more than a 50% chance of an election in the autumn and that if Johnson opted for “a clean break Brexit” then the Brexit Party would work with him so that the Brexit-supporting vote was not split.

“We would put country before party and we would do it every time,” Farage told supporters in London. “We would be prepared in those circumstances to help him, to work with him, perhaps, I don’t know, in the form of a non-aggression pact at the election.”

Farage, who once posed with Donald Trump in a gilded lift, has been cast by enemies as a delirious racist, though supporters credit him with a prescient contribution to the biggest political upset in modern British history – Brexit.

He says Brexit is being betrayed by an out of touch elite who do not understand that if they thwart Britain’s exit then politics will be poisoned for a generation or more.

Farage said a clean break on Oct. 31 was the most popular option among voters but he questioned whether Johnson could be trusted on Brexit.

The EU Withdrawal Agreement negotiated between former Prime Minister Theresa May and Brussels last November was, Farage said, the worst deal in history even without the Irish border backstop. He said he suspected Johnson would try to get an amended agreement passed by the British parliament.

Johnson, an avowed Brexiteer, is betting that the threat of a disorderly no-deal exit will convince German Chancellor Angela Merkel and French President Emmanuel Macron to grant him the divorce deal he wants.

That rhetoric appears to have won over voters from the Brexit Party – which has been successful in recent years at poaching Conservative Party voters.

Johnson’s Conservative Party has opened up a 14 percentage point lead over the opposition Labour Party as Johnson’s tougher stance on Brexit wins back supporters, according to a poll last week.