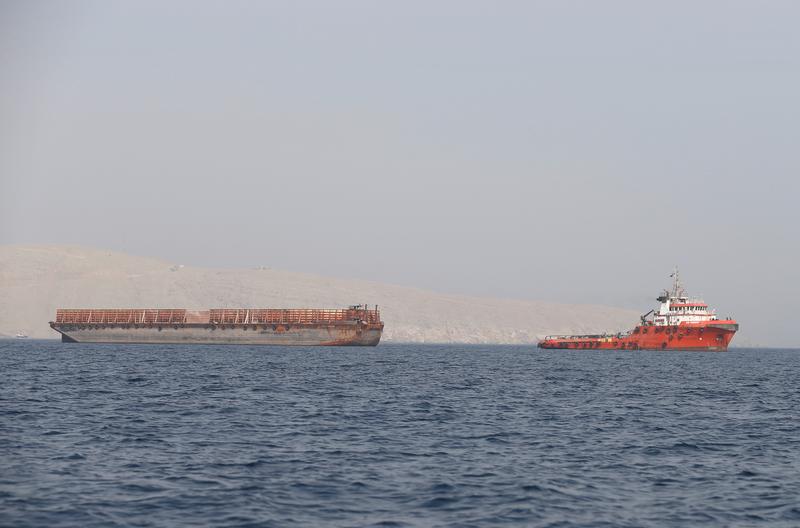 (Reuters) – Explosions that damaged two tankers south of the Strait of Hormuz on Thursday come a month after four vessels were targeted in “sabotage attacks” off the coast of the United Arab Emirates.

FILE PHOTO: A tugboat moves cargo towards the Strait of Hormuz off the coast of Musandam province, Oman, July 20, 2018. REUTERS/Hamad I Mohammed/File Photo – RC1A66753840

Below are details about the Strait:

WHAT IS THE STRAIT OF HORMUZ?

-The strait lies between Oman and Iran

-It is 21 miles (33 km) wide at its narrowest point, with the shipping lane just two miles (three km) wide in either direction

-The UAE and Saudi Arabia have sought to find other routes to bypass the Strait, including building more oil pipelines

WHY DOES IT MATTER?

-Almost a fifth of the world’s oil passes through the Strait – some 17.2 million barrels per day (bpd) versus consumption of about 100 million bpd in 2017, data from analytics firm Vortexa showed

-OPEC members Saudi Arabia, Iran, the UAE, Kuwait and Iraq export most of their crude via the Strait

-Qatar, the world’s biggest liquefied natural gas (LNG) exporter, sends almost all of its LNG through the Strait

-The U.S. Fifth Fleet, based in Bahrain, is tasked with protecting commercial shipping in the area

During the 1980-1988 Iran-Iraq war, the two sides sought to disrupt each other’s oil exports in what was known as the Tanker War

-In July 1988, the U.S. warship Vincennes shot down an Iranian airliner, killing all 290 aboard, in what Washington said was an accident and Tehran said was a deliberate attack

-In January 2012, Iran threatened to block the Strait in retaliation for U.S. and European sanctions that targeted its oil revenue in an attempt to stop Tehran’s nuclear program

-In May 2015, Iranian ships seized a container ship in the Strait and fired shots at a Singapore-flagged tanker which it said damaged an Iranian oil platform

-In July 2018, President Hassan Rouhani hinted Iran could disrupt oil trade through the Strait in response to U.S. calls to reduce Iran’s oil exports to zero

-In May 2019, four vessels – including two Saudi oil tankers – were attacked off the UAE coast near Fujairah, one of the world’s largest bunkering hubs, just outside the Strait of Hormuz