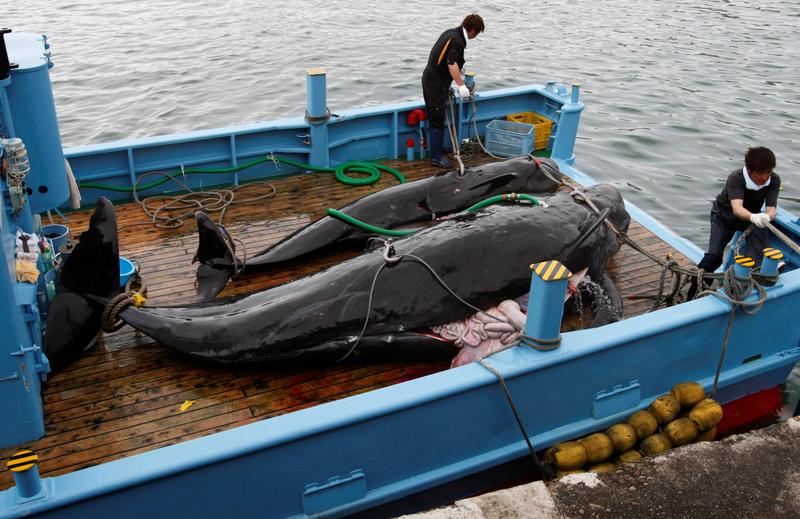 TOKYO (Reuters) – Japan has for decades been steadfastly defiant about hunting whales despite widespread anger, including from key allies like the United States.

After roughly 30 years of what it has called scientific research whaling, which saw several hundred minke whales taken annually in the Antarctic and North Pacific, Japan in December announced it would leave the International Whaling Commission (IWC) and resume commercial whaling on July 1.

HOW LONG HAS JAPAN BEEN WHALING?

Some areas whaled in prehistory, and in modern times eating them has been mostly confined to specific regions. Whaling historically thrived in the western Japanese town of Taiji – made notorious for the dolphin hunts featured in the Oscar-winning movie “The Cove” – until its whaling fleet was devastated in an 1878 storm. They currently have a ship that takes part in coastal whaling and will join the July 1 fleet.

Though Japan’s government insists eating whale is an important part of the country’s food culture, consumption did not become widespread until after World War Two, when the occupation authorities encouraged it to feed the impoverished population.

WHAT HAPPENED WITH THE IWC?

Japan joined the IWC in 1951, six years after the International Convention for the Regulation of Whaling was signed to found the group, aimed at sustainably managing commercial whaling. But a growing environmental movement shifted the group’s emphasis towards conservation.

Japanese politicians, scientists and government officials regarded that as betraying the group’s founding principles and ignoring the fact that not all whale species were endangered.

In 1988, two years after an international moratorium on commercial whaling began, Japan started scientific research whaling in the North Pacific and the Antarctic. Japanese officials asserted that it provided vital population information, but anti-whaling nations said it was commercial whaling in disguise.

In 2014, the International Court of Justice ruled Japan’s whaling plan was unscientific, forcing it to call off the 2014-2015 hunt. Japan returned the next season with a re-tooled plan to take several hundred Antarctic minkes. But in following years it threatened to leave the IWC, saying the group had become paralyzed.

“We had no choice,” Japan’s retiring IWC Commissioner, Joji Morishita, told Reuters, noting that hundreds of meetings over years failed to find any middle ground.

Japan will remain an observer on the group’s Scientific Committee.

WHY INSIST ON WHALING?

Roughly 300 people are directly involved in whaling. Demand for whale has been stagnant for more than a decade at roughly 5,000 tonnes annually. That breaks down to roughly 40 grams per person a year, or half the mass of a medium-sized apple.

Nobody in the industry expects demand or profits to grow rapidly when commercial whaling resumes.

But Japan has long felt vulnerable about food security. For the last 20 years, according to Agriculture Ministry data, only about 40 percent of the calories the average Japanese person consumes every day is domestically produced. YES – calorie intake per person per day.

As competition for marine resources heats up, Japan – one of the world’s largest consumers of fish – feels the pressure. Some, including conservatives in Prime Minister Shinzo Abe’s ruling party, worry that if Japan stops whaling, it may next be asked to stop fishing for something else, such as tuna.

Others say whale provides protein with a smaller carbon footprint than beef or pork.

Both Abe and the policy chief of his Liberal Democratic Party, Toshihiro Nikai, are from whaling districts. Abe’s includes Shimonoseki, where the factory ship for scientific whaling was based, while Taiji is part of Nikai’s home base.