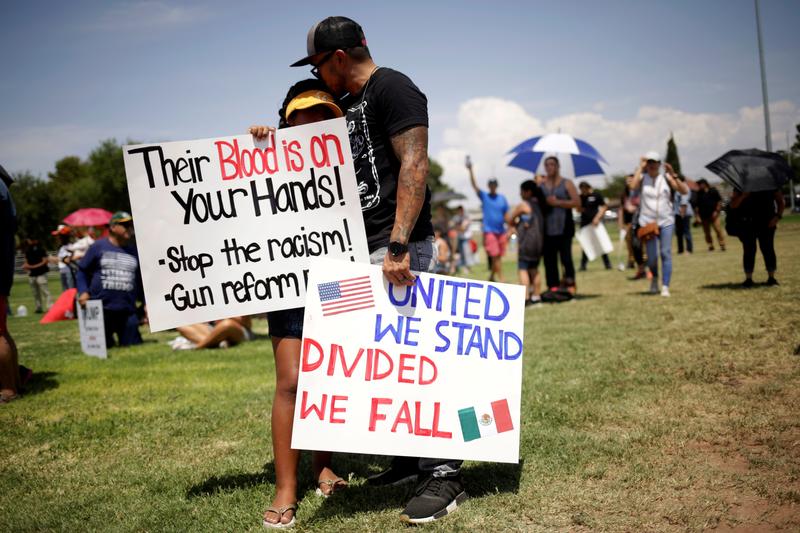 NEW YORK (Reuters) – Americans have spent the past three years debating what impact President Donald Trump’s racially charged remarks have had on society.

An analysis of Reuters/Ipsos public opinion polling from 2016 to 2019 finds that racial anxieties among white Americans have softened since 2016, when Trump was running for office. And survey respondents who reject racial stereotypes are more interested in voting than those who express stronger levels of anti-black or anti-Hispanic biases.

To conduct its analysis, Reuters and Ipsos, its polling partner, worked with political scientists at the University of Michigan and Duke University to measure how Americans’ feelings about race have changed over the past several years. (For graphic on Americans’ changing views on race: tmsnrt.rs/2YPpVBW)

Here is how those measurements were conducted.

REUTERS/IPSOS POLL: Reuters used the Reuters/Ipsos online poll to track public opinion, gathering responses from 4,436 U.S. adults from July 17-22. Each respondent answered a series of questions that measured their political engagement and their tendency for racial stereotyping, empathy for other races and racial anxieties. Their responses were compared with similar Reuters/Ipsos polls conducted between 2016 and 2018.

STEREOTYPING: The poll asked respondents to rate people of different races on a series of personality traits, including their general intelligence, work ethic, manners, peacefulness and lawfulness. They were first asked to rate white people on a scale of 1 to 7, with 1 being the most beneficial to society and 7 being the worst. Respondents were then asked to do the same for African Americans, Hispanics and Asian Americans.

EMPATHY: Respondents were asked if they felt blacks and whites were treated equally, or if one race was treated less fairly than the other, in the workplace, in stores or restaurants, in the healthcare system, with police and the courts, in public schools and when voting in elections.

RACIAL ANXIETIES: The poll asked if people thought whites or minorities were “under attack” in America. It also measured how many people agreed that America must protect its “white European” and its “multi-cultural” heritage. Those responses were compared with previous polls in August 2017 and August 2018.

Click here tmsnrt.rs/2YS5TGL for the topline results from the July 2019 poll.