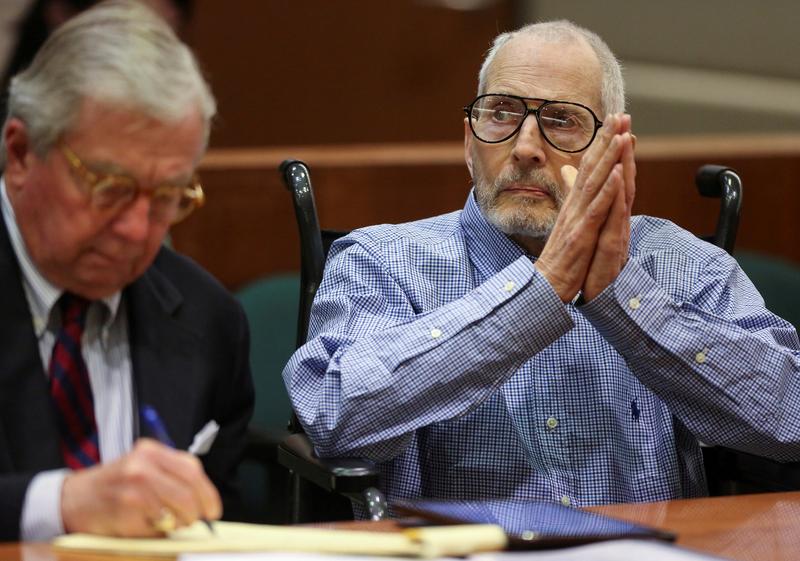 LOS ANGELES (Reuters) – Attorneys for real estate scion Robert Durst, charged in Los Angeles with murdering his confidante Susan Berman in 2000, have asked a judge to declare that prosecutors had a very close working relationship with filmmakers behind an HBO documentary series who uncovered key evidence in the case.

Durst’s attorneys on July 31 filed legal papers, which have not been publicly disclosed but were seen by Reuters, asking a judge to rule that the filmmakers are not entitled to legal rights that shield journalists from having to reveal their sources and information.

Without such protections, the filmmakers could be forced to disclose information they came across in filming “The Jinx” to Durst’s attorneys that could aid in his defense, legal experts said.

The legal papers filed by Durst’s attorneys do not seek to suppress any evidence uncovered for “The Jinx” that could be used at trial, saying they were not at this point asserting the collaboration between filmmakers and prosecutors violated his constitutional rights.

Durst, 76, the multimillionaire grandson of a New York real estate tycoon, has pleaded not guilty to the murder charge.

The filmmakers, according to the defense motion, “consulted, coordinated and collaborated” with authorities as far back as 2011 – four years before the documentary aired. They presented prosecutors with a PowerPoint presentation of their findings before Durst was arrested in 2015 and charged with murdering Berman, it said.

“‘The Jinx’ was not the work of journalists,” Durst’s attorneys wrote in the motion. “It was ratings-seeking filmmakers engaging in police work.”

Durst’s attorney, Dick DeGuerin, in an email would not discuss the motion in detail. “I decline to publicly discuss our strategy,” he said.

Victor Kovner, an attorney representing “The Jinx” director Andrew Jarecki, said the filmmakers reached out to authorities as responsible citizens only after they finished all their interviews because they had discovered evidence.

“At no time did any of the journalists receive or respond in any way to any direction by the prosecution, and we’ll be making that clear in (court) papers that will be public in a couple weeks,” Kovner said in a phone interview

A spokesman for prosecutors declined to discuss the motion, saying in an email that any response would come in the form of their own court filing.

The motion from Durst’s attorneys is among the issues expected to be discussed at a court hearing on Sept. 3.

Authorities arrested Durst in New Orleans on March 14, 2015, one day before the airing of the finale of “The Jinx” in which Durst could be heard muttering to himself off-camera in the bathroom, “There it is, you’re caught” and “Killed them all, of course,” after the filmmakers confronted him with potential evidence. Prosecutors contended he killed Berman because she knew too much about the 1982 disappearance of his wife.

Although the legal papers filed by Durst’s attorneys do not seek to suppress any evidence uncovered for “The Jinx” that could be used at trial, criminal defense experts said suppressing evidence, such as Durst’s hot mic statements, may be the attorneys’ ultimate strategy.

Los Angeles Superior Court Judge Mark Windham, at a hearing last year in which he ordered Durst to stand trial on a charge of murdering Berman, said of the hot mic recording, “without explanation from the defendant, it operates as a succinct confession.”

The judge would be unlikely to agree to suppress evidence from “The Jinx” if defense attorneys requested it be excluded from the trial, legal experts said.

“The fact that they (the filmmakers) had a recording which they got, there’s nothing wrong with sharing that with law enforcement, it’s evidence in a murder case,” said Steve Cron, a defense attorney not associated with the case and a university lecturer.

But Durst’s attorneys, if they succeed in their goal of having a judge require the filmmakers share information, could discover evidence that helps their case, legal experts said.

“It enables them to do discovery work and uncover the entire scope of what (the filmmakers) did and perhaps they could find some misconduct,” said Dmitry Gorin, another defense attorney not associated with the case and a university lecturer.

Durst made his off-camera mutterings after filmmakers showed him a letter he once sent Berman. The letter misspelled Beverly Hills as “Beverley Hills,” which was the same spelling used in a separate letter someone anonymously sent police in December 2000 saying there was a dead body at Susan Berman’s home address.

That is where police found Berman, who had been shot in the head.