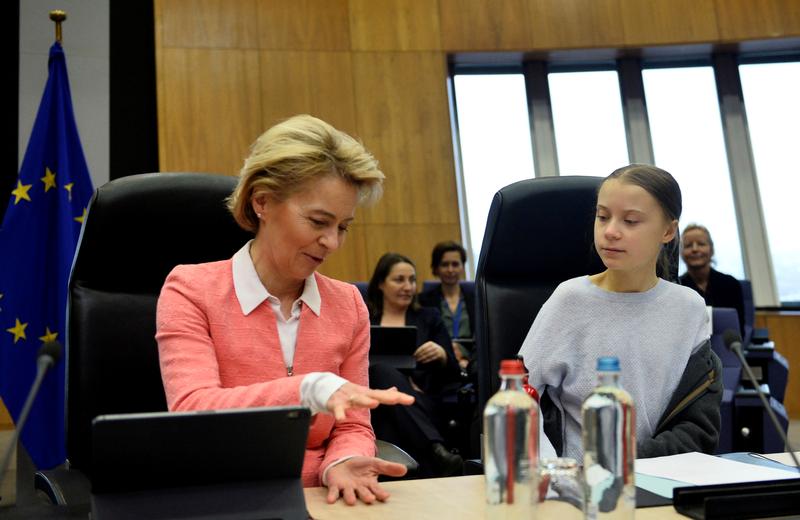 The European Union’s executive approved the proposed regulation at a meeting attended by Thunberg.

The climate law, which needs the approval of the European Parliament and member states, would commit the 27-nation EU to reducing its net greenhouse gas emissions to zero by 2050. It omits a target that was included in a draft of the law — to achieve net “removals” of greenhouse gases after this date.

According to the regulation, 2050 will be an EU-wide goal, which raises the possibility that some member states could reduce their emissions to net zero at a later date if other countries decarbonize early.

Thunberg, 17, said the law fails to address the next 10 years.

“‘Net zero emissions by 2050’ for the EU equals surrender. It means giving up,” she and 33 other youth climate activists said in an open letter published on Tuesday. “We don’t just need goals for just 2030 or 2050. We, above all, need them for 2020 and every following month and year to come.”

Environment groups also objected to the law’s plan for the Commission to review the EU 2030 emissions target by September.

That is only two months before a deadline at the U.N. climate summit in November, when all parties to the Paris Agreement on fighting climate change must make more ambitious emissions pledges to put the world on track to limit global warming to 1.5 degrees Celsius.

Twelve EU countries – including France, Italy and the Netherlands but not the EU’s biggest emitter, Germany – want the Commission to revise the 2030 goal in June.

They say that would leave enough time for the EU to adopt the new 2030 target and use it to pressure large emitters such as China to raise their climate pledges before the summit.

The NGO projected an image of flames onto the European Commission building in Brussels on Tuesday, urging leaders to tackle climate change as urgently as if a house were on fire.

The Commission wants to tighten the EU’s 2030 climate target to a 50% or 55% cut in greenhouse gas emissions from 1990 levels, rather than the current minimum of 40%.

From 2030, the law would give Brussels power to impose tighter EU interim emissions targets every five years to steer the bloc towards its 2050 goal.

The Commission would impose these new targets through a delegated act, whereby a qualified majority of members of the European Parliament or member states could reject the proposal but would not have the power to propose an alternative.

Member states may find this proposal hard to swallow.

“One thing that will absolutely not fly is the delegated act. It’s dead on arrival,” said Michael Bloss, a German member of the European Parliament.

Legal experts say the climate law would give Brussels extra tools to pressure countries before 2030. Starting in 2023, the Commission will name and shame member states not complying with EU climate targets and publish recommendations to get on track.