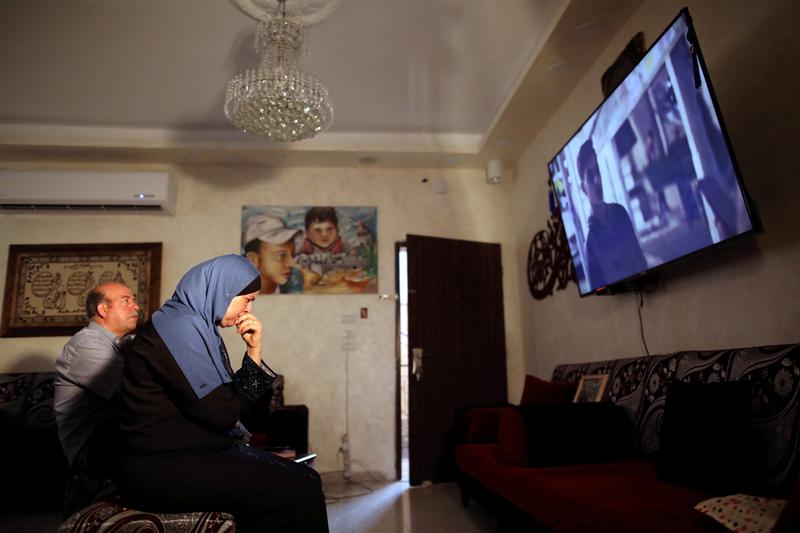 JERUSALEM (Reuters) – A new HBO series on the killing of a Palestinian youth after three Israeli teens were murdered in a deadly summer five years ago is stirring up painful memories for bereaved families on both sides of the conflict.

Hussein and Suha Abu Khdeir, whose son’s murder is the subject of the HBO series “Our Boys”, watch the show’s first two episodes in their East Jerusalem home August 18, 2019. REUTERS/Ammar Awad

“Our Boys”, which premiered in Israel and the United States last week, centers on Mohammed Abu Khdeir, a 16-year-old Palestinian who was abducted near his East Jerusalem home and burned to death by three Israelis, two of them also teenagers, in July 2014.

“I wish I could reach into the screen and grab hold of my son,” Abu Khdeir’s mother, Suha, told Reuters, her voice breaking, soon after watching the first two episodes of the series, a co-production of HBO and Israel’s Keshet International and produced by Movie Plus.

“The show brought me right back to the pain, to the day he was kidnapped,” she said.

The deaths of the four youths spiraled into a seven-week war between Israel and Hamas, which rules the Gaza Strip.

HBO’s 10-episode dramatization dissects Israel’s internal investigation into the three ultra-Orthodox Jews eventually convicted of Abu Khdeir’s murder and the frantic initial days after his parents learned of his disappearance and death.

The Hebrew- and Arabic-language series was written, directed and produced by two Jewish Israelis and an Arab Israeli, who mix documentary footage with live production to delve into the micro details they say drive the conflict.

“We live in an extremely nuanced world where wars erupt because of tiny things,” co-director Joseph Cedar, 50, said in an interview alongside collaborators Hagai Levi and Tawfik Abu Wael.

“We tried to peel back the layers of this hate crime,” he said.

But some bereaved Israeli families have said the show largely glosses over the murder of the three Israeli teens, who are referenced throughout the series but not included as characters.

Two Hamas suspects in the murders were killed in a 2014 shootout and in 2015 an Israeli court sentenced a third Hamas member to three life terms for the teens’ abduction and murder.

“The balance is not clear to someone viewing the show, who thinks ‘we murder them, they murder us’,” said Merav Hajaj, whose daughter, an army officer, was killed along with three other cadets in a Palestinian truck ramming attack in Jerusalem in 2017.

Hajaj, 49, wrote a letter signed by some 120 bereaved Israeli families criticizing HBO and requesting the program list the number of Israelis killed in Palestinian attacks through the years.

Levi said the creators felt they had portrayed the context of Abu Khdeir’s killing.

“But the crime is the story,” he said.