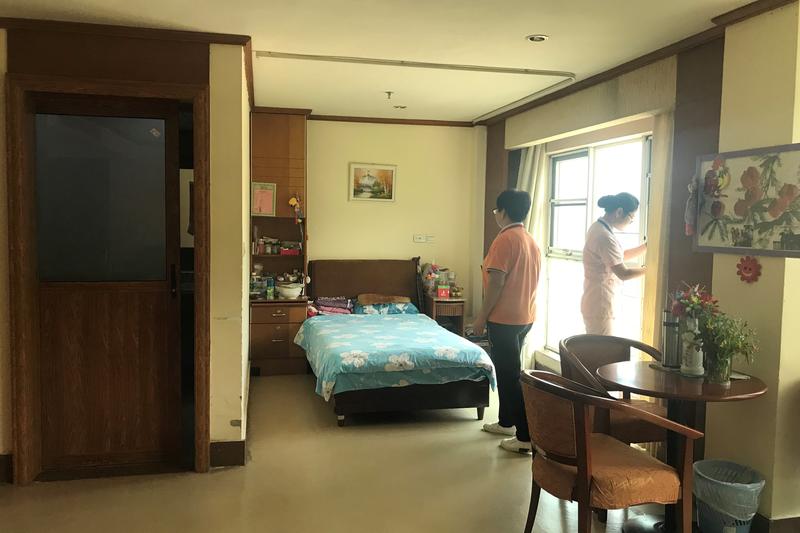 HONG KONG (Reuters) – After spending time with his 84-year-old mother in a senior care home in the southern Chinese city of Shenzhen, David Lee walked up to the supervisor and asked to reserve a place there for his own retirement.

Lee, a 56-year-old from just across the border in Hong Kong, moved his mother, who has Alzheimer’s and other ailments, into Yee Hong Heights two months ago as it became more difficult for him to care for her.

An increasing number of people like him are outside Hong Kong – one of the world’s most expensive cities – to mainland China for cheaper and better retirement options.

“My mother had been queuing for two years for a space in a senior care home in Hong Kong, and she only waited two months before getting a space here,” Lee said.

It is a marked departure from the scepticism that greeted the Hong Kong government a few years ago when it tried to encourage seniors to retire in China’s Guangdong province as part of an effort to ease a housing shortage.

Many then were concerned about cultural differences, medical services and a lack of insurance coverage in the mainland.

But faster transport links to the mainland and an integration push by the Hong Kong and Chinese central governments under the Greater Bay Area initiative have helped ease some of those fears.

New World Development (0017.HK), a major Hong Kong developer, said it planned to expand “Humansa” – a senior healthcare and rehabilitation service it launched late last year – into Shenzhen, Foshan, Shunde and other cities in the mainland this year.

Baring Private Equity told an industry summit recently that it planned to invest in senior housing in the Greater Bay Area.

So far, there are at least five senior homes in Guangdong opened by Hong Kong investors or non-government organizations, providing over 2,000 beds, official data show.

According to an official Hong Kong survey, 77,000 people from Hong Kong 65 and older lived in Guangdong in 2016.

Hong Kong’s Labour and Welfare Bureau forecast there would be a shortage of 11,600 subsidized beds for elderly care in the 2026 fiscal year. That’s the equivalent of about 70 senior care homes.

Elderly Hong Kongers who cannot afford those rates wait 37 months on average for subsidized senior housing, and the average room is 6.5 square meters, compared with 30 square meters in the mainland.

The government also plans to grant additional old-age living allowances starting in 2020 for people living in the two provinces.

Yee Hong Height is run by a Hong Kong NGO that works with the Hong Kong government to allocate subsidized beds. But it also sells private beds to both Hong Kong and mainland Chinese elderly.

“In the past we were like sales people and had to go to Hong Kong to promote our center. But now, many people come to visit us themselves,” said Jackie Mo, superintendent of Yee Hong Heights.

Service providers from Hong Kong and Macau get construction and operation subsidies – just like their local peers – if they utilize idle social resources for development.

Yet “if you target 100% Hong Kong elderly, it doesn’t look good to the local government,” Mo said. “But if you want to target local Chinese clients, there are so many cheaper options here.”

Insufficient medical insurance in China and a lack of confidence in China’s medical services remain the biggest obstacle for Hong Kong people retiring there, according to industry sources.

“Since I have spent most of my life time in Hong Kong; I am more familiar and have trust in the local hospital rather than the Greater Bay Area,” said Mr Liu, 74, a retiree who declined to give his full name, adding he would not consider moving to a senior care home in the mainland.