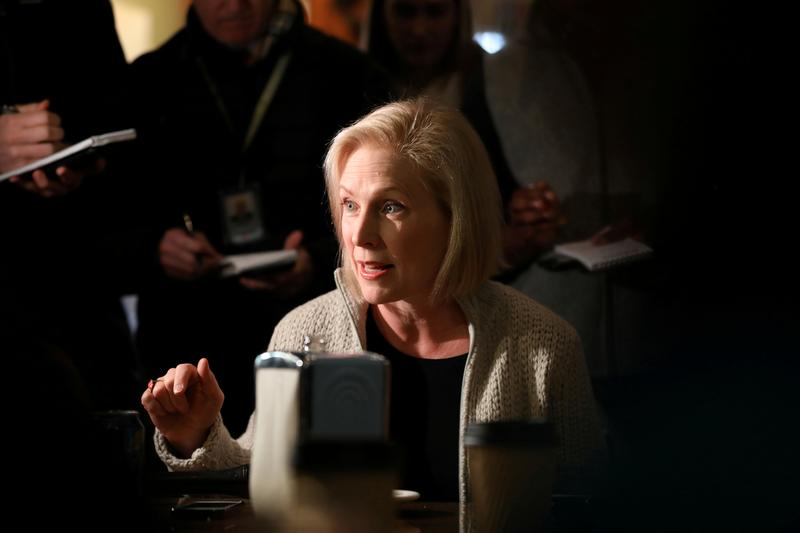 FILE PHOTO: U.S. Senator Kirsten Gillibrand (D-NY) talks to customers at the Pierce Street Coffee Works while on a walking tour after announcing that she is forming an exploratory committee to enter the 2020 presidential race, in Sioux City, Iowa, U.S., January 18, 2019. REUTERS/Scott Morgan/File Photo

At the biggest gathering so far of 2020 presidential candidates, the Democrats had five minutes each to sum up their case for the presidency. Most agreed on the problems, including finding a solution to climate change, improving public education and easing pay and wealth inequality.

They all agreed on the solution: Defeating Republican President Donald Trump.

The dinner in Iowa, the state that holds the first nominating contest in the Democratic presidential race in February, came one day after the Des Moines Register published a new Iowa opinion poll showing former U.S. Vice President Joe Biden leading the pack in the state.

U.S Senators Bernie Sanders and Elizabeth Warren, along with South Bend, Indiana, Mayor Pete Buttigieg, were bunched closely in a fight for second place in the poll.

Sanders and Buttigieg took what seemed to be veiled swipes at Biden, the Democratic front-runner who skipped the dinner because of a scheduling conflict.

“I understand there are some well-intentioned Democrats and candidates who believe the best way forward is a middle-ground strategy that antagonizes no one, that stands up to nobody and that changes nothing,” Sanders said. “In my view, that approach is not just bad public policy, but it is a failed political strategy that I fear would end up with the re-election of Donald Trump.”

Buttigieg ridiculed the idea that Democrats could return to the 1990s.

“We’re not going to win by playing it safe or promising a return to normal. We are where we are because normal broke,” he said.

Iowa party leaders said the dinner would be an opportunity for lesser-known candidates to make their case, and several of those Democrats warned the party against leaning too far to the left, reflecting the lingering tensions between the party’s progressive and more pragmatic, moderate wings.

Former Colorado Governor John Hickenlooper took aim at Sanders’ democratic socialist agenda and said it was bad politics that could be a stumbling block to defeating Trump in 2020.

“We must present a bold vision for the future, but we also must acknowledge that the most effective charge Republicans can level against us is ‘socialism,’” he said.

“If we become that party, we’re going to win every election. And more importantly, we’ll be able to govern,” he said.

The dinner tested the organizational strength of campaigns that purchased tickets for supporters and packed them into the hotel ballroom. Supporters of most of the candidates lined the street outside the dinner’s main entrance starting early on Sunday.

Warren and fellow U.S. Senators Cory Booker, Kamala Harris and Amy Klobuchar had big turnouts of chanting and cheering supporters in red, blue, pink, green and yellow T-shirts outside the hall, and then led them in raucous marches inside.

“It’s time for a woman in the White House!” chanted Harris and Klobuchar supporters.

Buttigieg held a picnic nearby with supporters who then marched to the hall. Sanders led a march to the hall of McDonald’s workers and other union activists who support a $15-an-hour federal minimum wage.