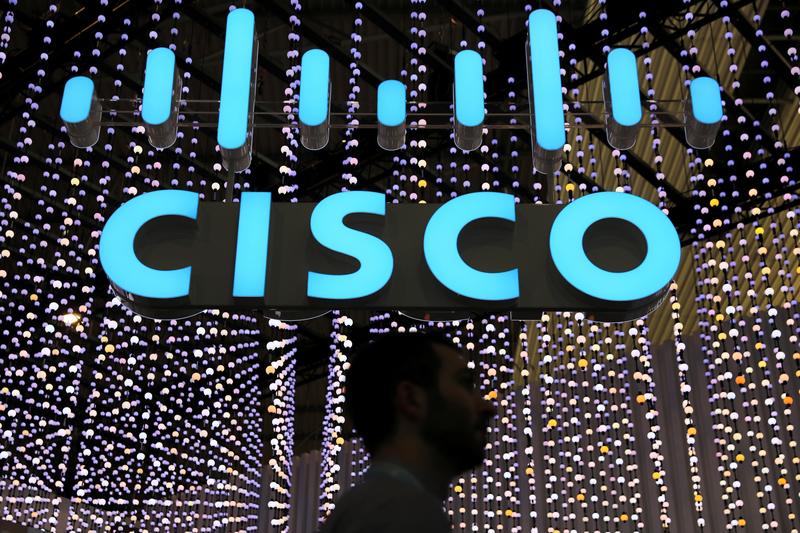 (Reuters) – Cisco Systems Inc forecast current-quarter profit below Wall Street estimates on Wednesday as it struggles to transition to a software-focused company from its traditional business of selling routers and switches, sending shares down 7.6%.

FILE PHOTO: A man passes under a Cisco logo at the Mobile World Congress in Barcelona, Spain February 25, 2019. REUTERS/Sergio Perez

Since taking the helm in July 2015, Chief Executive Officer Chuck Robbins has added muscle to the hardware giant’s growth areas such as the cloud, Internet of Things and cybersecurity through acquisitions.

Sales in its cybersecurity business, which offers firewall protection and breach detection systems, rose 14% to $714 million in the fourth quarter, but missed estimates of $737.1 million.

Cisco along with other tech companies have been under pressure ever since U.S. President Donald Trump decided to slap a fresh 10% tariff on Chinese goods.

The network gear maker said the tariffs would have a short-term impact even though China accounted for less than 3% of its overall revenue in the reported quarter.

“It’s a small part of our business. But obviously, when it falls very dramatically, you can still have some impact,” CEO Robbins said on a post-earnings analysts’ call.

The company’s shares have fallen 8% since Aug.1. after the latest tariff threat by the Trump administration.

Chief Financial Officer Kelly Kramer said the company sells all products including cloud in China. “From a product perspective… everything is being impacted.”

The network gear maker said it expects first-quarter revenue growth of between 0% and 2%. This implies a range of between $13.07 billion and $13.33 billion, while analysts forecast revenue of $13.40 billion, according to IBES data from Refinitiv.

It expects adjusted earnings of 80 cents to 82 cents per share in the first quarter of 2020, below analysts’ estimates of 83 cents.

Net income fell to $2.21 billion, or 51 cents per share, in the fourth quarter ended July 27. Excluding items, it earned 83 cents, above estimates of 82 cents.

Shares of the Dow component, which fell 3.4% in the runup to results amid broader declines in the market, were trading down at $46.75 after the bell.

Reporting by Sayanti Chakraborty in Bengaluru and and Stephen Nellis in San Francisco; Editing by Arun Koyyur