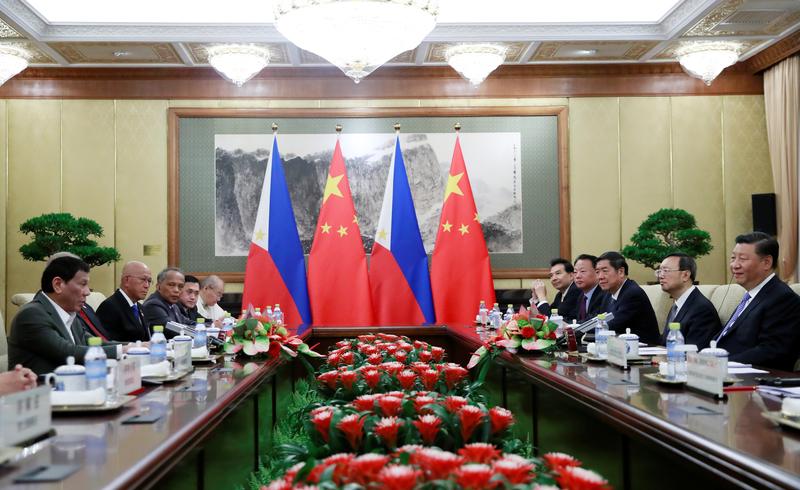 SHANGHAI (Reuters) – Chinese President Xi Jinping said China and the Philippines could take a “bigger step” in the joint development of oil and gas resources in the South China Sea if they can properly handle their dispute over sovereignty.

Xi made the remarks on Thursday in a meeting in Beijing with Philippine President Rodrigo Duterte, whose largely pro-China foreign policy and reluctance to challenge its maritime assertiveness has drawn widespread domestic criticism.

The visit comes amid a recent rise in tension on several fronts, with Chinese vessels challenging energy assets and the sea boundaries of Malaysia, Vietnam and the Philippines.

The United States has accused China of “coercive interference” and holding hostage $2.5 trillion of oil and gas in the region, while the European Union on Wednesday said it was worried about a deterioration in the maritime security environment, and suggested “mediation or arbitration” by third parties.

Britain, Germany and France on Thursday said they were concerned about the potential for “insecurity and instability” in the South China Sea.

In a televised news conference in Beijing on Friday, Duterte’s spokesman Salvador Panelo said the president was steadfast in raising the Philippines’ concerns about China’s maritime conduct, including the secretive passage of its warships numerous times within Manila’s 12-mile territorial sea.

The firebrand leader also conveyed to Xi his desire for China to comply with a 2016 arbitration ruling that invalidated its claim to sovereignty over most of the South China Sea, and made clear Manila’s economic entitlements.

Duterte raised that in a way that “unequivocally, assertively but friendly” Panelo said, adding that Xi was not offended, but reiterated that China did not recognize the arbitral ruling and would not budge on that.

Experts say Duterte’s unwillingness thus far to press the issue or build international support behind enforcing the ruling has enabled China to consolidate its maritime power and further expand its military assets on its artificial islands.

A report on the meeting by state news agency Xinhua made no mention of the ruling.

“As long as the two sides handle the South China Sea issue properly, the atmosphere of bilateral ties will be sound, the foundation of the relationship will be stable, and regional peace and stability will have an important guarantee,” it quoted Xi as saying.

The two sides could take a “bigger step” in the joint development of offshore oil and gas, it quoted Xi as saying.

That could be extremely complex and sensitive, however, as both countries claim jurisdiction over the Reed Bank, the main site of the oil and gas reserves, despite the arbitration award declaring that Manila had sovereign rights to exploit them.

The Philippines is proposing a 60-40 sharing arrangement in its favor.

China’s claims in the South China Sea, through which more than $3 trillion in ship-borne trade passes each year, are contested by Brunei, Malaysia, the Philippines, Taiwan and Vietnam.

Panelo also said Xi told Duterte that he would appreciate it more if the Philippines could “eliminate” its China-focused gaming operations, which employ tens of thousands of Chinese workers and target online users in mainland China, where gambling it is forbidden.