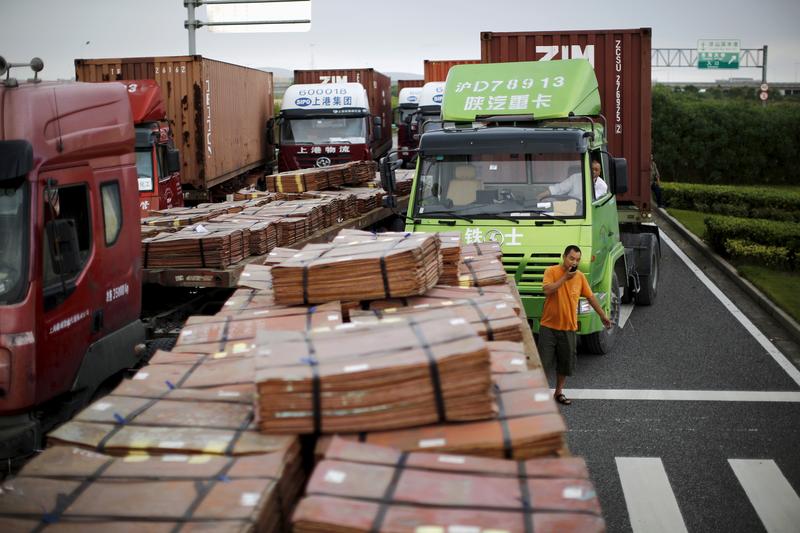 BEIJING (Reuters) – China’s unwrought copper imports fell 10.9% from the previous month to 361,000 tonnes in May, according to official customs data, in a bearish sign for economic growth in the world’s top consumer of the metal.

Trucks carrying copper and other goods are seen waiting to enter an area of the Shanghai Free Trade Zone, in Shanghai in this September 24, 2014 file photo. REUTERS/Carlos Barria/Files

For the first five months of the year, imports came to 1.95 million tonnes, down 9.4%, the General Administration of Customs data showed.

The fall comes as China imposes tighter restrictions on imports of scrap copper from July 1, with industry sources expecting a sharp slowdown in arrivals of scrap cargoes ahead of that date.

Copper is widely used in construction and manufacturing, and demand for the metal is considered a bellwether for the health of an economy. China’s factory activity in May slumped into a deeper contraction than expected, in a potentially ominous sign for demand, at least for unwrought copper.

Concentrate imports are up 16.6% so far this year as smelting capacity in China expands.

China, the world’s top producer and consumer of the metal used in everything from cars to cans, exported 536,000 tonnes of unwrought aluminum, including primary metal, alloy and semi-finished products, in May.