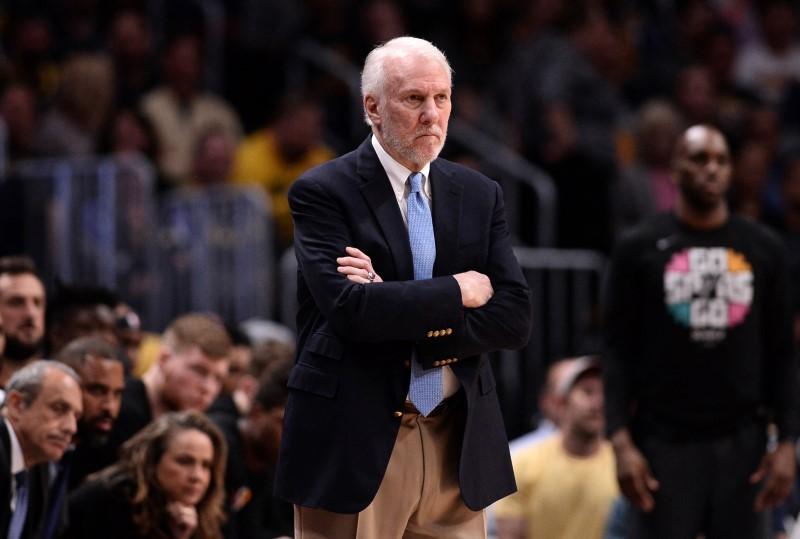 SYDNEY (Reuters) – Even though Gregg Popovich has a roster packed with NBA All-Stars, the United States coach is still a little concerned about the quality of opposition his team will face at the basketball World Cup in August.

FILE PHOTO: Apr 27, 2019; Denver, CO, USA; San Antonio Spurs head coach Gregg Popovich during the first half against the Denver Nuggets in game seven of the first round of the 2019 NBA Playoffs at the Pepsi Center. Mandatory Credit: Ron Chenoy-USA TODAY Sports

The San Antonio Spurs head coach will then cull that to the 12 needed for warm-up games against Spain in Los Angeles on Aug. 16, Australia in Melbourne on Aug. 22 and 24 and Canada in Sydney on Aug. 24.

“This will be a process,” Popovich told reporters on a conference call on Tuesday.

“Four days is not enough to do much of anything in life. What’s available and what’s necessary are two different things and we need to look at the process to be a team that plays like a team when we get to China.

“Before that, each minute will be important to us. We are fully aware that we don’t have a lot of time.”

The quality of the opposing teams at the World Cup, many of which will feature NBA players, was a concern for Popovich.

The matches against Australia’s Boomers at Melbourne’s Docklands stadium, would therefore provide the U.S. with the final challenge he felt was necessary heading into the Aug. 31-Sept. 15 tournament in China.

“It’s obviously a talented group,” Popovich said of the Boomers, who have included NBA players such as Philadelphia’s Ben Simmons and the Spurs’ Paddy Mills in their squad.

“And every country the USA plays against, they want to beat them (the U.S.) badly. I expect the Australians to be a major factor in the World Cup.”

The World Cup title is not the only thing up for grabs in China, with direct qualifying spots for next year’s Tokyo Olympics also on the line.

Apart from the 20 players named in the initial squad, USA Basketball have approached others like the Los Angeles Lakers forward LeBron James to be available for Tokyo next year.

James, one of the game’s all-time greats, has not ruled himself out of contention for Popovich’s squad for his fourth Games after he won bronze in Athens in 2004 and golds at Beijing in 2008 and London in 2012.

It was that desire of some of the biggest names in the sport to make themselves available for their national sides that pleased the U.S. team’s managing director Jerry Colangelo the most.

“It speaks volumes,” Colangelo said. “It says that these players have a passion for the game and for representing their countries. That is all very positive stuff.

“It just creates a situation where it creates much better competition.”

Reporting by Greg Stutchbury in Wellington; Editing by Nick Mulvenney