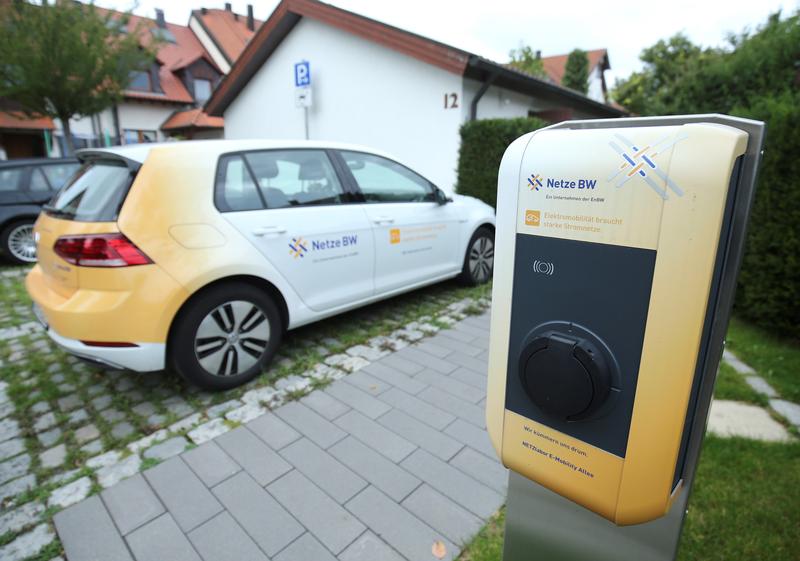 STUTTGART, Germany (Reuters) – Automakers around the world are pushing hard for new networks that can charge electric cars fast. In Europe, some power companies and grid operators are testing whether it might be smarter and cheaper to move into the slow lane.

A 15-month study of electric car charging behavior in Germany has concluded that consumers can be persuaded to accept slow, overnight recharging that could help avoid brownouts from surges in electricity demand or costly upgrades to power grids.

The prospect of millions of EVs hitting the roads as governments gradually ban new diesel and gasoline cars is seen as a major challenge for power companies, especially in Germany which is switching from nuclear and coal to less predictable sources of energy such as wind and solar.

The small study in the wealthy Stuttgart suburb of Ostfildern-Ruit though has helped alleviate the concerns of some grid operators that too many electric vehicles (EVs) charging at peak times could cause network crashes.

The engineers at Netze BW, the local grid operator behind the trial, found that all the households involved came around to leaving their electric cars plugged in overnight and only half ever charged simultaneously.

“Since the experience with the project we have become a lot more relaxed. We can imagine that, in future, half of the inhabitants of such a street own electric vehicles,” said Netze BW engineer Selma Lossau, project manager for the study.

Still, with limited EV battery ranges for now, slow, overnight charging doesn’t get around the problem of how to persuade drivers to ditch petrol cars altogether.

A study by energy regulator NVE showed that Norway faces a bill of 11 billion crowns ($1.2 billion) over the next 20 years for low- and high-voltage grids, substations and high-voltage transformers – unless it can persuade car owners to charge outside peak afternoon hours.

The investment cost to the country of 5.3 million people could drop to just over 4 billion crowns if cars are charged in the evening, and may fall close to zero if batteries are only plugged in at night, NVE said.

NVE is now working a tariff proposal which will penalize peak-hours charging. Tibber, a Norwegian power company, already offers cheaper electricity for EV charging if you let it decide when your car is charged while firms such as ZAPTEC offer ways to adjust charging to the available grid capacity.

Some of the 10 households participating in the Stuttgart trial said they initially wanted to keep topping up their cars for fear of running out of juice, but soon adapted to leaving the power company to handle it as it saw fit overnight.

“At the start, I did not want to take any risks and charged frequently in order to feel secure. Over time, I changed my outlook,” said Norbert Simianer, a retired head teacher who drove a Renault Zoe during the trial. “I grew used to the car and became more at ease in handling the loading process.”

Simianer and his neighbors were given electric cars and 22 kilowatt (kW) wall-boxes for their garages, alongside two charging points in the street, all free of charge.

In return, they gave up their normal cars and allowed Netze BW, which is a subsidiary of German utility EnBW (EBKG.DE), to monitor and carry out a deferred and down-scaled charging process during a seven-and-a-half-hour period overnight.

Netze BW tried various options, either slotting cars in at the maximum 22 kW charging flow one after another, or lengthening the charging time for individual cars by adjusting the power flow, or combining both methods, Lossau said.

The participants, who used apps to check the status of their car batteries, grew accustomed to the lack of instant charging capability because their vehicles could always handle their everyday commutes of up to 50 km (31 miles).

EnBW said nine of the 10 households in the trial on Ostfildern-Ruit’s Belchenstrasse had opted to keep the wall-boxes and most were exploring leasing electric car.

Lossau said monitoring 10 households did not in itself provide the “empirical mass to draw conclusions for the load profile of all of Germany”.

She also said there would need to be better two-way communication between EVs, the grid and consumers for the system to function efficiently on a large scale.

“There will have to be more exchange of information between e-cars and the grid to update the loading status in real-time, because otherwise, there can be the wrong impression about the speed of loading,” she said.

Utility companies developing so-called vehicle-to-grid (V2G) services, however, are struggling to persuade some automakers to use technology that allows two-way flows of information, and power, between batteries and grids.

Carmakers such as Volkswagen (VOWG_p.DE), Daimler (DAIGn.DE) and Ford (F.N), for example, are prioritizing one-directional fast-charging instead to overcome consumer resistance to EVs.

Japan’s Nissan (7201.T) has been leading the way among carmakers exploring V2G though Germany’s BMW (BMWG.DE) has now decided to develop it too, saying cooperation between cars and grids will be key to making e-mobility ready for mass markets.

“It is about making sure there is enough supply for the electric cars and that the lights do not go out elsewhere,” a BMW spokesman said. “The cars don’t just load when it’s best for the market, but they can also supply power back to the grid to help even out demand spikes.”

“There has to be more progress on the data exchanges, however. It is not yet the standard,” he said.

Nevertheless, the Ostfildern-Ruit trial has raised hopes that power grids might be able to cope with an influx of electric cars, especially if the consumers play ball.

Even if drivers resist overnight charging, suppliers of software and equipment to power grids, such as Germany’s Siemens (SIEGn.DE), are also looking at safer and more efficient ways to manage how and when power is used to charge cars.

The German city of Hamburg, for example, started a three-year pilot project this month with Siemens to pre-emptively identify overloads on transformers and along cables, and manage EV charging points accordingly.

“Loading processes offer so much flexibility that the overload on the networks can be reduced by deferring loading times or reducing the load that is supplied,” said Thomas Werner, expert at Siemens Digital Grid.

“This happens through the digitization of hardware and software and with communication technology,” he said.

With few than 100,000 electric-only cars in Germany at the moment, there is little threat of blackouts from over-demand. But the Transport Ministry in Berlin envisages up to 10 million electric cars on the roads by 2030.

The number of charging points across the country also only stands at 21,000. That’s up 50% over the last year but still barely a fraction of future needs.

Next up for Netze BW is a trickier test.

Managing the power for 10 households with electric cars in a suburban street of 22 homes is one thing, now the power company is launching a study of car charging behavior in an apartment block with 80 flats, where quarrels over access are likely.

It is also looking at a study in rural areas, where the longer cables required present challenges in maintaining stable voltages for charging.

But that’s still only part of the story. Lossau said power companies would have to work more closely with carmakers to fill knowledge gaps and exchange information.

“It can only work if we get more data from each other.”