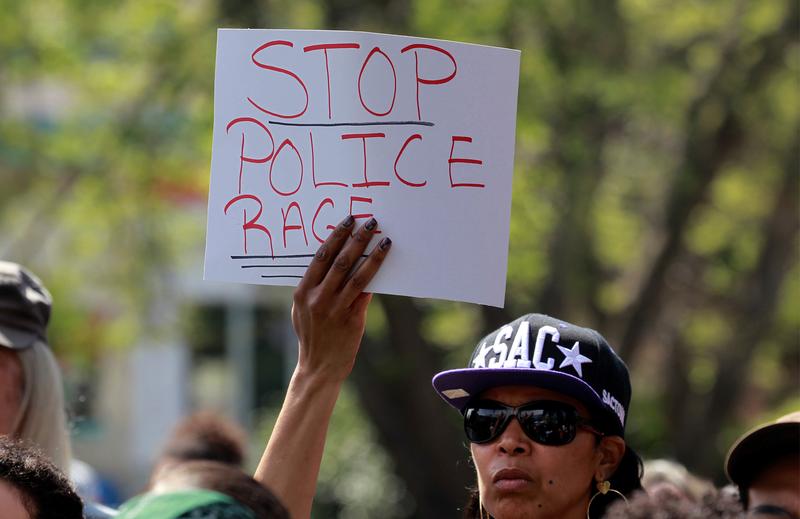 FILE PHOTO: A demonstrator holds a sign at a rally to protest the police shooting of Stephon Clark, in Sacramento, California, U.S., March 31, 2018. REUTERS/Bob Strong/File Photo

(Reuters) – California police officers will be allowed to use lethal force only when “necessary” in response to a threat, instead of the existing standard of “reasonable”, under a new law signed by Gov. Gavin Newsom on Monday.

Under the stricter standards, officers must believe they have no other choice to “defend against an imminent threat of death or serious bodily injury to the officer or another person,” an abstract of the law published online says.

The new law, which officials say is one of the most restrictive in the United States, is partly a response to police shootings of unarmed black men. Those include the death of Stephon Clark, 22, who was killed by Sacramento police in March 2018, touching off protests across the state.

Clark, who was black, was standing in his grandmother’s yard, holding a cell phone, when he was shot and killed last year. The two officers were exonerated in March, touching off more protests.

At the signing, Newsom said he hoped California’s new law would become a model for the nation.

“As California goes, so goes the rest of the United States of America,” Newsom said, according to news media. “And we are doing something today that stretches the boundaries of possibility and sends a message to people all across the country – that more can be done.”

Clark’s family attended the signing ceremony at the invitation of the governor. The law goes into effect in January. But not all of them were entirely pleased.

“The bill is watered down, everybody knows that,” Stevante Clark, brother of Stephon Clark, told the Los Angeles Times.

Neither the governor’s office nor Clark’s family members of could be immediately reached by Reuters early on Tuesday.

Reporting by Rich McKay in Atlanta; editng by Larry King