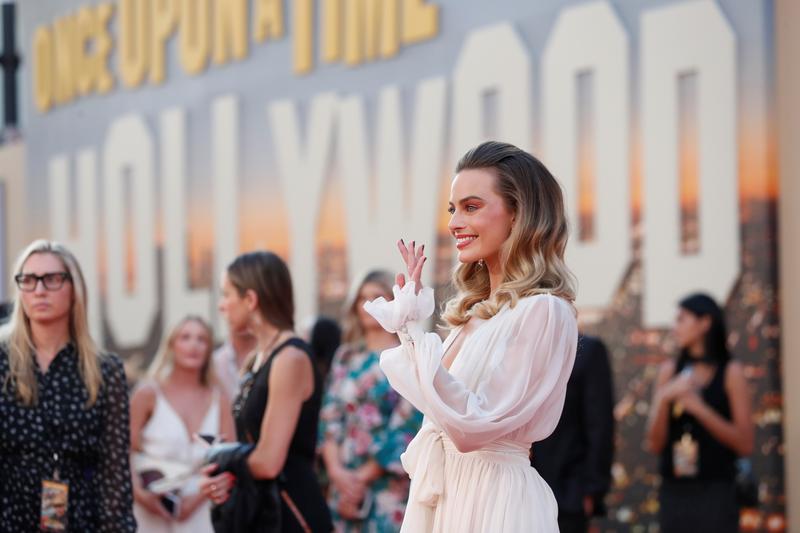 LOS ANGELES, (Variety.com) – Disney’s “The Lion King” might still rule everything the light touches, but Quentin Tarantino’s “Once Upon a Time in Hollywood” certainly held its own this weekend at the domestic box office.

FILE PHOTO: Margot Robbie attends the premiere of “Once Upon a Time In Hollywood” in Los Angeles, California, U.S., July 22, 2019. REUTERS/Mario Anzuoni

In a win for original content, Tarantino’s R-rated ode to Hollywood’s golden age opened with $40 million from 3,659 North American theaters, a career best for the filmmaker. The movie also scored an opening day record for Tarantino, amassing $16.8 million on Friday.

“Once Upon a Time in Hollywood” came in second place behind “The Lion King,” which collected another $75.5 million, down roughly 60% from its inaugural outing. Jon Favreau’s remake of the animated classic has generated $350 million at the domestic box office, making it the fourth-biggest release of the year after 10 days in theaters. Overseas, “The Lion King” has earned $612 million for a worldwide bounty of $963 million.

Heading into the weekend, Sony tempered expectations for “Once Upon a Time in Hollywood,” estimating a $30 million start given the mid-summer debut for a film that isn’t based on existing IP or part of a franchise. The movie has the benefit of positive reviews — and the rare chance to see Leonardo DiCaprio and Brad Pitt share the big screen — but it will need to rely on word of mouth to continue drawing crowds throughout popcorn season. It received a B CinemaScore from audiences, compared to the A- score for his most recent hits, 2009’s “Inglourious Basterds” and 2012’s “Django Unchained.”

“Inglorious Basterds,” which also starred Pitt and debuted during summer, launched with $38 million and ended its box office run with $120 million in North America and $321 million worldwide. “Django Unchained,” Tarantino’s biggest box office success to date, bowed with $30 million over the holidays, and went on to earn $425 million globally.

“Once Upon a Time in Hollywood” — Tarantino’s ninth feature and the first made without the help of disgraced producer Harvey Weinstein — cost $90 million to produce, making it one of his most expensive films. The movie follows DiCaprio and Pitt as an aging actor and his longtime stunt double who are struggling to find their place in show biz. At the same time, Sharon Tate (Margot Robbie), the up-and-coming actress married to director Roman Polanski, moves next door. The drama, which pays tribute to the golden age of Hollywood, is set in the late 1960s against the backdrop of the Manson family murders.

Since “Once Upon a Time in Hollywood” was the only newcomer to movie theater marquees, holdovers rounded out box office charts. Sony’s “Spider-Man: Far From Home” landed at No. 3, adding $12.2 million. After four weeks in theaters, the superhero adventure has made a mighty $344 million. It has now passed the domestic totals of 2017’s “Spider-Man: Homecoming” ($334 million) and Sam Raimi’s “Spider-Man 3” ($336 million).

Prior to this weekend, the domestic box office was down over 7% from last year. Now, ticket sales are behind 6.5%, according to ComScore. That figure could continue to shrink when “Fast & Furious” spinoff “Hobbs & Shaw” hits theaters next weekend.