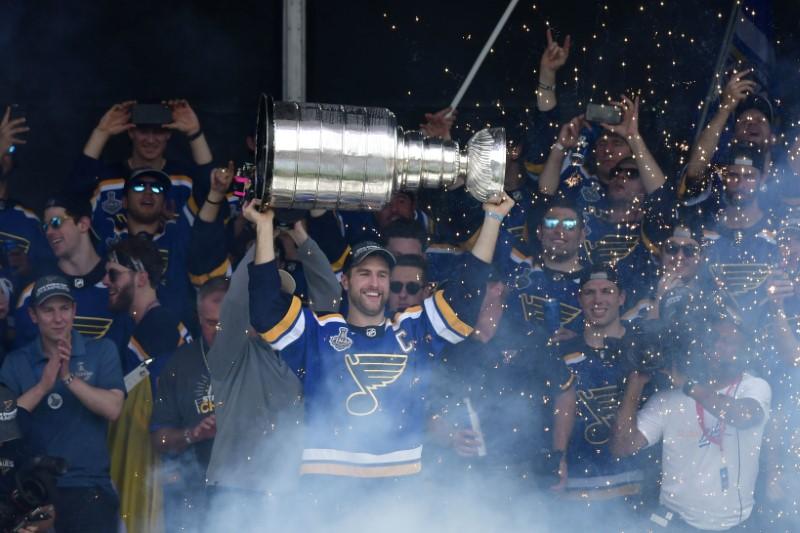 Heavy rain didn’t dampen the spirits of the St. Louis Blues or their fans Saturday as a crowd estimated in the hundreds of thousands turned out to see the 2019 Stanley Cup champions parade through downtown.

It was the first Stanley Cup title in franchise history for the Blues, who began play in 1967. St. Louis defeated the Boston Bruins 4-1 in Game 7 on Wednesday night. The city of St. Louis hadn’t celebrated a major title since the Cardinals won the 2011 World Series.

Fans began showing up hours before the parade, which traveled down Market Street to the Gateway Arch for a rally.

Ryan O’Reilly, the Conn Smythe Trophy winner as the playoff MVP, carried the Cup along Market Street, and let fans gets their hands on the trophy. “It still hasn’t sunk in yet,” he said. “I can’t believe we won a Stanley Cup.”

Blues captain and defenseman Alex Pietrangelo, who has been carrying around the Stanley Cup since Wednesday night, admitted on Saturday that he was getting worn out by constantly holding the 35-pound trophy. “I’m trying to get some guys to come help me here.”

Brett Hull, the Blues legend who played in the NHL from 1986 to 2005 and was also an NHL general manager, and currently is an executive vice president for St. Louis, also celebrated.

“This is the greatest day ever for St. Louis,” Hull told Fox Sports Midwest reporter Andy Strickland. “I’m still crying.” Hull came up empty after playing for the Blues from 1988-98, but was a member of Stanley Cup-winning teams with the Dallas Stars and Detroit Red Wings.

Blues interim coach Craig Berube – who guided the team to an improbable title after Mike Yeo was fired in November, summed up his feelings about the scene with one word – “Unbelievable!”

He later told Fox Sports: “I’m so happy for our fans. It’s unbelievable how many people are out here today cheering. It’s great. … We all dream of winning the Cup as kids and when we get older and stuff like that. But this is unbelievable to see this scene right now. I really cannot describe it.”

Also standing out in the crowd was 11-year-old superfan Laila Anderson, who has been described as the team’s good-luck charm. Suffering from HLH, a rare disease that affects her immune system, Anderson attended Game 7 in Boston and rode in the parade.

“I actually thought my mom was pulling a prank on me,” Anderson said about hearing that she was invited to the party Saturday.

Another diehard St. Louis sports fan in attendance was Mad Men actor John Hamm, who said, “I can’t get over how many people I’m seeing right now, but I hope all of you feel the same way that I feel, which is pride, joy and exuberance.”

The celebration was extra special because it honored another in a series of sports teams that finally ended longtime droughts. Of course, the Chicago Cubs’ World Series championship in 2016 is famous for ending 108 years of futility. When the Philadelphia Eagles won the Super Bowl in 2018, it was their first championship in 58 years.