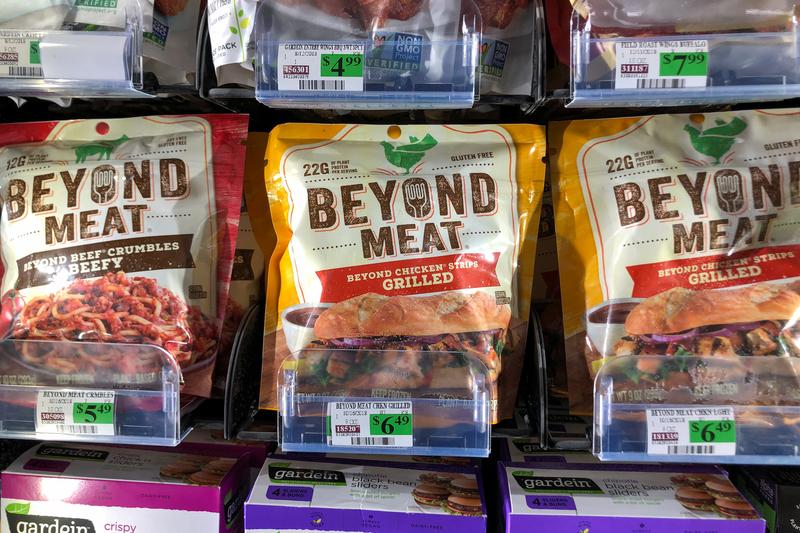 (Reuters) – Shares of Beyond Meat Inc fell as much as 22% on Tuesday after one of the stock’s lead underwriters, J.P. Morgan, downgraded it, saying the exponential growth expected from the plant-based burger was now priced in.

Products from Beyond Meat Inc, the vegan burger maker, are shown for sale at a market in Encinitas, California, U.S., June 5, 2019. REUTERS/

Beyond Meat has surged over 69% in two days since it forecast overall sales in 2019 to more than double.

J.P. Morgan analyst Ken Goldman cut the stock rating to ‘neutral’ from ‘overweight’ and said it was “purely a valuation call”.

The stock, which has quadrupled in value since debut in May, is “beyond our price target”, he said.

Shares of the company were down 19.8% at $134.9 in mid-day trading, but still well above every Wall Street analysts’ price target on the stock.

Goldman raised price target for the second time in three days to $121, after raising it by $23 last Friday on the upbeat forecast.

Goldman last week wrote that “at some point, the extraordinary revenue and profit potential embedded in Beyond Meat… will be priced in.”

“We think this day has arrived,” his latest note said.

Separately, Beyond Meat said on Tuesday it would start selling a new version of its flagship vegan burgers, which look and cook more like traditional beef, as it battles for space in the meat section of U.S. grocery stores.

The launch of its meatier burger comes as it prepares to compete against new launches from Nestle, Tyson Foods Inc and Impossible Foods.

The new burgers imitate the marbling effect, or the streaks of fat, seen in red meat, and also have a texture that mimics the chewiness and juiciness of beef.

The California-based company has been focused on getting more meat eaters to pick up its products, saying they are more sustainable and better for the environment.

The new burgers are made with blended pea, mung bean and rice proteins that give a more fibrous texture, compared to the company’s previous recipe which included pea protein, coconut and canola oil.

Reporting by Nivedita Balu in Bengaluru; Editing by Shinjini Ganguli