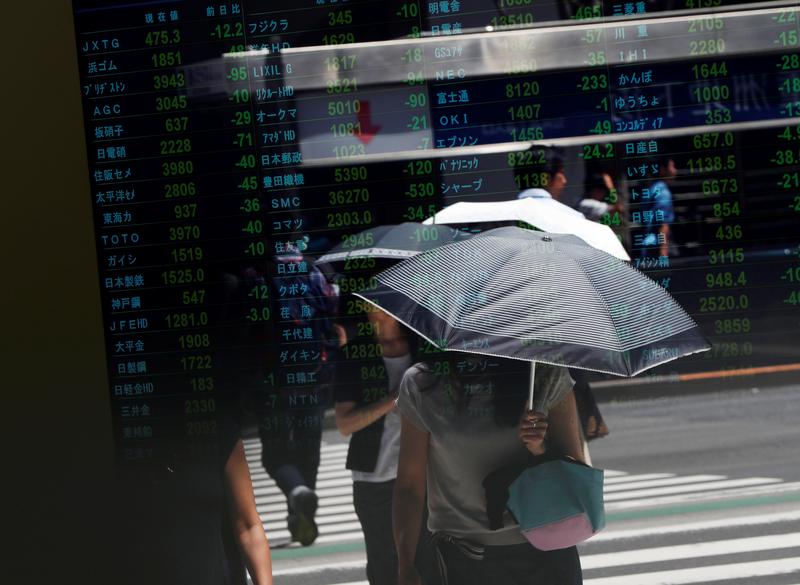 MSCI’s broadest index of Asia-Pacific shares outside Japan shook off early losses to eke out a 0.02% gain.

The index was aided by Chinese shares, which rallied from the previous week’s losses. Blue-chip shares rose 0.96%, with listed brokerages boosted by a late Friday announcement from China’s securities regulator of relaxed margin financing rules..

Further helping sentiment, the People’s Bank of China (PBOC) set its daily midpoint for yuan trading – which determines the limits for its onshore movement – at 7.0211 per dollar. That was weaker than Friday’s setting but stronger than market expectations.

Ryan Felsman, senior economist at CommSec in Sydney, said there was a “positive reaction” to Monday’s fixing, including a pick-up in the Australian dollar, as it reassured investors that China won’t steadily weaken the yuan.

At the same time, uncertainty over how the U.S.-China trade conflict will be resolved is contributing to market volatility, Felsman said.

One week ago, China allowed the yuan to break through the key 7-per-dollar level for the first time since 2008, prompting Washington to label Beijing a currency manipulator and sparking market ructions.

The International Monetary Fund said on Friday that it stood by its assessment that the value of China’s yuan was largely in line with economic fundamentals.

Trading activity was relatively muted with some regional markets, including Japan, Singapore and India, closed for holidays on Monday.

On Friday, Wall Street saw a three-day winning streak snapped after U.S. President Donald Trump said Washington was continuing trade talks with Beijing, but that the U.S. was not going to make a deal for now.

Those comments helped to drive a late sell-off in a volatile session that saw the Dow Jones Industrial Average fall 0.34%, the S&P 500 lose 0.66% and the Nasdaq Composite drop 1%.

White House trade adviser Peter Navarro subsequently said that the United States was still planning to hold another round of trade talks with Chinese negotiators.

Worries about the damaging effects of the trade war were underscored by a warning from Goldman Sachs of the rising risk of a U.S. recession, and that it no longer expects a trade deal before the 2020 U.S. presidential election.

Elsewhere, there was little positive news. Data last week showed the British economy unexpectedly shrank for the first time since 2012 in the second quarter, while German industrial production suffered its biggest annual decline in nine years. All of that raised global recession fears as the escalating Sino-U.S tariff war took a toll on trade and investment.

“Cross asset correlations and money flow continue to tell (us) that this funk in markets is a genuine result of fear and uncertainty from traders and investors,” said Greg McKenna, strategist at McKenna Macro financial advisory firm in Australia.

A flight to perceived safe-haven assets helped to lift the price of gold above $1,500 last week for the first time since April 2013. The precious metal shed some early gains on Monday but last traded flat at $1,496.70 per ounce.

The UK currency came under pressure on Friday after the downbeat data on the British economy.

The dollar index, which tracks the greenback against a basket of six major rivals, was flat at 97.493.

China’s onshore yuan weakened slightly against the dollar to 7.0623 while its offshore counterpart strengthened 0.06% to 7.0918 per dollar.

“The market took the higher (yuan) fixings in its stride and will now focus on establishing a new equilibrium for USD/CNY … The PBOC is unlikely to fuel excessive speculative RMB depreciation pressures after allowing USD/CNY to trade above 7,” analysts at Bank of America Merrill Lynch said in a note.

Oil prices dipped, having risen sharply on Friday on a drop in European inventories and production cuts by the Organization of the Petroleum Exporting Countries.