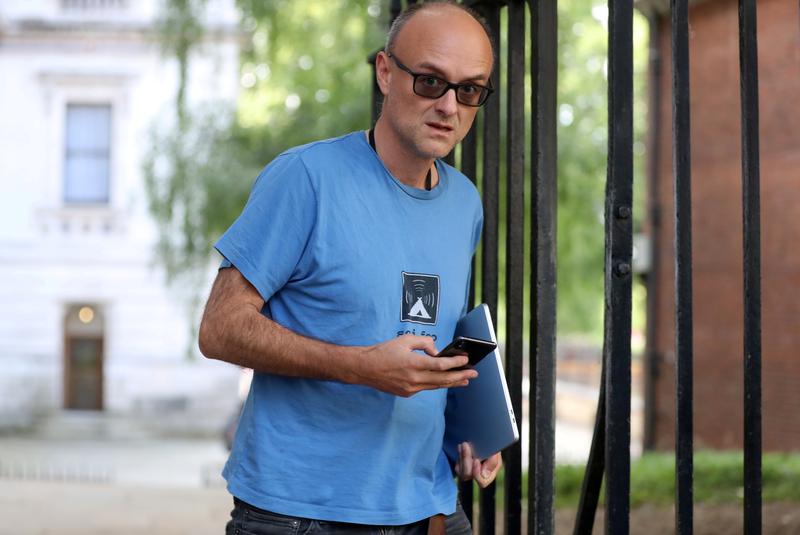 LONDON (Reuters) – Boris Johnson has lost no time in making his mark as British prime minister. In two weeks, he has toured the country telling Britons a spending squeeze will end and they will leave the European Union on Oct. 31 no matter what.

His moves bear the hallmark of one man who has stayed behind the scenes since Johnson became prime minister on July 24 but has a vital role — senior adviser and de facto chief of staff Dominic Cummings.

Cummings, the architect of the ‘Vote Leave’ campaign in the 2016 Brexit referendum, says little in public. Yet comments by two sources who worked with him at Vote Leave, his essays, blogs and reports from insiders over the last few years suggest a policy of moving fast and bypassing others in pursuit of a goal.

The two sources, one supporter and one critic, say the threat of a no-deal Brexit is a plan by Cummings designed to force the EU to compromise on the departure deal agreed by Johnson’s predecessor Theresa May, and to pin the blame on the bloc if no new agreement can be reached.

Parliament rejected that deal because some lawmakers feared it could bind Britain to EU rules it would no longer have any say over, leading to a “Brexit in name only”.

But Johnson’s insistence that the government will, if it has to, pursue a no-deal Brexit, has weakened the pound as investors bet Britain, already at risk of recession, could see a disruptive departure.

Making a splash with pledges to voters in pursuit of Brexit is also part of Cumming’s plan, the sources said, building on a similar strategy which swayed Britain’s 2016 referendum on continued EU membership.

The 47-year-old strategist, who did not respond to a request for comment for this article, has dismissed assertions by critics that he puts ideology before the interests of the economy or population.

“I’ve never been a party person. I’m not Tory (Conservative), libertarian, ‘populist’ or anything else. I follow projects I think are worthwhile,” Cummings wrote of himself on his blog in early 2017.

His desire to move fast is born partly out of a decision, which he later regretted, to take time off after the Brexit referendum victory.

Cummings said in his blog the government then “screwed it up” and told supporters not to worry about any “permanent” commitments made by May’s government in the Brexit negotiations. He described those commitments as being the product of “officials and their bullshit ‘legal advice’”.

His driving philosophy – according to the articles on his blog – seems to be that much of Britain’s system of government has been taken over by “groupthink”, unable and ill-equipped to deal with the problems of modern-day statehood.

On Monday, less than two weeks after Johnson took over from May, Johnson announced a cash injection of 1.8 billion pounds ($2.2 billion) into the struggling public health system, which regularly ranks among the top concerns for voters.

He had already promised to ease the purse strings on a tour of Wales, Scotland, Northern Ireland and the north of England – areas hard hit by an almost decade-long spending squeeze by his Conservative Party.

The opposition Labour Party has questioned the motives of Johnson’s spending promises, saying he is preparing to call an election to strengthen his government’s majority of one.

The central message of the victorious “Leave” campaign masterminded by Cummings was that a departure from the EU was an opportunity to “take back control” and spend more at home.

It outflanked critics who questioned where the money will come from, particularly if Britain leaves the EU – its biggest trading partner – without a deal to smooth over the disruption that would cause.

The two sources said Cummings knew that a “Vote Leave” slogan promising extra funds for the health service instead of sending money to the EU could cause an outcry during the Brexit campaign, but that this was part of the plan.

The public questioning of the figure of 350 million pounds, which was emblazoned on the side of a campaign bus, gave it prominence and the message got through to voters rather than the scepticism around whether Britain would actually have that amount to spend.

“In a way this is rather typical of Cummings’ approach. It was effective but rather cynical,” a source who worked with, and is critical of, Cummings on the leave campaign said on condition of anonymity.

Cummings has dismissed such characterisations. “Some people now claim this was cynical and we never intended to spend more on the NHS. Wrong,” he said in another blog in early 2017.

He said he had told Johnson at the time: “on day one of being PM (prime minister) you should immediately announce the extra 100 million pounds per week for the NHS is starting today and more will be coming – you should start off by being unusual, a political (politician) who actually delivers what they promise.”

He quoted Johnson saying: “Absolutely. ABSOLUTELY. We MUST do this, no question, we’ll park our tanks EVERYWHERE.”

Cummings once recommended readers of his blog to read a book outlining the political style of Russian President Vladimir Putin’s adviser, Vladislav Surkov, who Russian political analysts say is an expert in diverting public attention from pressing issues with political theatre.

A close colleague at Vote Leave and Cummings supporter said the now senior adviser to Johnson uses “Soviet propaganda techniques” in pursuit of his goals.

Yet that colleague and the other one who spoke to Reuters on condition of anonymity said Johnson’s threat to leave the EU without a deal is a calculated strategy, not a reckless one.

“I think it’s a high risk strategy but I think it’s probably right,” one of Cummings’ former colleagues said.

Cummings is likely to remain secretive and keep his team small, as he did during the Vote Leave campaign.

His appointment compares with Steve Bannon’s key role in the early days of U.S. President Donald Trump’s administration after helping him to power or that of Martin Selmayr, adviser to Jean-Claude Junker before and after he became President of the European Commission.

The whole team at Britain’s Vote Leave campaign headquarters numbered around 40 to 50 people, while Cummings’ core team amounted to 10 to 15 people, his former campaign colleague said.

“He was very hands on. He had tight control over everything, he was very disciplined in his approach and people, you know, just had to stay in line,” the source said.

It is a modus operandi built up while working as a special adviser to minister Michael Gove, another Brexit supporter who is now in charge of no-deal planning, at the education department between 2011 to 2014.

After he left that job, he sharply criticised then-Prime Minister David Cameron and others in government. Cameron described Cummings as a “career psychopath”. In turn, Cummings said of Cameron: “I do not hate Cameron. I do not respect him, which is different.”

Cummings said in his blog he kept three timetables to ensure his plans did not get railroaded by Downing Street or others.

One contained “the real plan” to be shared with fewer than 10 people; another excluded sensitive matters but would not be shared with Number 10 Downing Street, the prime minister’s office; and a “‘No. 10 friendly’ plan with everything important removed in order to keep them in the dark”.

For many Brexit supporters, Cummings – as much as Johnson – is the man that can unlock the Brexit crisis, which has slowed economic growth and has diminished Britain’s standing, and deliver its departure on Oct. 31.

But Cummings alienated many people while running the Vote Leave campaign, and will be in no rush to befriend negotiators in Brussels or many of the lawmakers who must vote for any deal for it to be approved, the critical Vote Leave source said.

Several lawmakers are also rallying around to try to find ways to prevent Britain from leaving the EU without an agreement.

“I think this may be the danger,” said the source. “… which is he’ll finish up with a sort of iron control over a whole range of people who in the end will buckle down and work very hard for him, but at the expense of alienating a whole lot of other people he really needs to keep on board.”