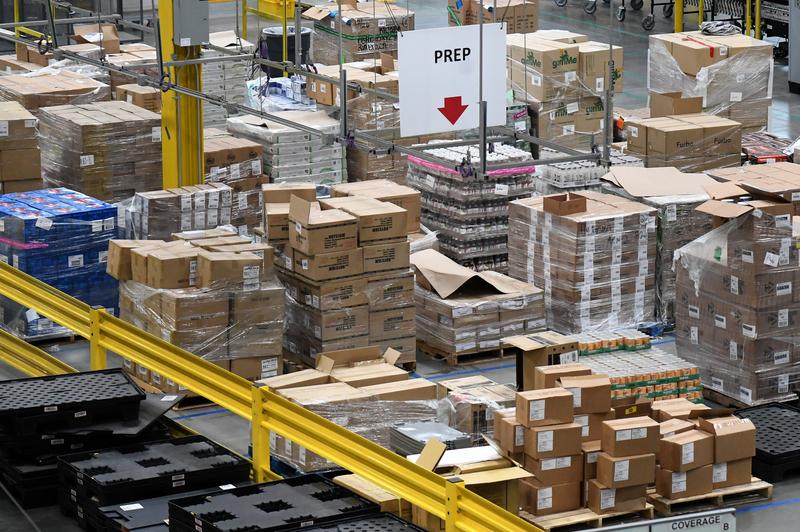 (Reuters) – Amazon.com Inc (AMZN.O) has quietly opened a series of small warehouses closer to big U.S. cities in a move to shave hours off delivery times, the company told Reuters.

An overview of the product prep area of the Amazon fulfilment center is seen in Baltimore, Maryland, U.S., April 30, 2019. REUTERS/Clodagh Kilcoyne

On Tuesday, the world’s largest online retailer is updating its same-day delivery program for shoppers in Phoenix, Philadelphia, Dallas and Orlando, it said. Amazon will guarantee packages arrive by several set times daily.

Amazon has long offered one or two-hour delivery via Prime Now, a service that includes fresh groceries and more than 20,000 items.

The same-day offer will now guarantee delivery of more than 100,000 products, from phone chargers to dog food, in as little as five hours, from a new warehouse close to each launch city, said Jon Alexander, Amazon’s director of delivery experience. For comparison, Amazon offers more than 100 million items for two-day U.S. delivery or faster via Prime.

“The smaller selection enables us to put these types of facilities much closer to customers,” he said. Additional items – up to 3 million – will pass through the facilities on their way to same-day customers.

The new format combines the storage, picking and packing functions of Amazon’s fulfillment centers with the sorting and delivery functions of other facilities into a single building.

Compared with fulfillment centers, which are farther from urban cores and house much more inventory, the new warehouse is roughly a tenth the size, at 100,000 square feet. Amazon says shorter drive times will help it meet its pledge on carbon emissions.

The company declined to comment on the facilities’ cost. Amazon, once famous for spending away profit, often cites warehouse build-outs as one of its biggest areas of investment.

According to Alexander, Amazon would typically lease existing spaces and alter them to accommodate the operation.

The new facilities are automated with the same ‘drive units’ used in Amazon’s fulfillment centers. These are squat, floor-scurrying robots that hoist up movable shelves of inventory and bring them to associates who pick customer orders. Amazon said each building will create hundreds of full and part-time jobs.

While the same-day option is covered for Prime members who spend at least $35, those without Prime are charged $12.98 per order, a tactic that could draw people to sign up.

Amazon will announce more cities for the program later this year, Alexander said.