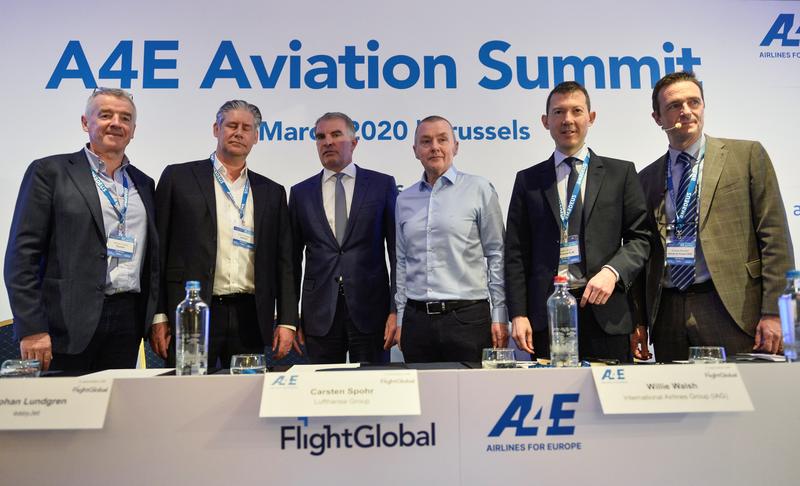 BRUSSELS (Reuters) – The worst is still to come for the airline industry in terms of economic damage from the coronavirus outbreak, European carrier bosses warned on Tuesday, but they predicted that travel demand could stabilise in the coming weeks.

Coronavirus dominated the conversation as the heads of Europe’s biggest carriers including Ryanair’s (RYA.I) Michael O’Leary and Willie Walsh, boss of British Airways-owner IAG, gathered at an annual industry conference, to lobby against new air taxes and call for improvements to air traffic control.

Airlines worldwide have been suspending flights or modifying services in response to the coronavirus outbreak, which has now claimed more than 3,000 lives and infected more than 90,000 people globally, after spreading from China to 77 other countries and territories.

Walsh noted a “very significant fall-off in demand” in Italian markets in the past week, as Italy has seen the biggest outbreak in Europe. But he predicted demand would stabilise in coming weeks if bookings followed the pattern seen in Asia.

“I think we will see air traffic recover in due course,” he said.

Ryanair’s O’Leary agreed that the next few weeks would be tough. He said he expected a “very deflated booking environment” for the next two to three weeks, but should the crisis stabilise, bookings would recover.

“I think you will see a pretty rapid return to normal,” he said.

As part of the European airline lobby group A4E, the airlines – which also include Lufthansa (LHAG.DE), Air France-KLM (AIRF.PA) easyJet (EZJ.L) – called for a relaxation of airport regulations to help them cope with the impact of coronavirus.

That followed a call from global industry body IATA on Monday for a suspension of rules under which airlines can lose lucrative landing and take-off slots if they cancel flights for a prolonged period.

“We request that a temporary waiver be granted by all (EU) member states,” Air France-KLM (AIRF.PA) CEO Ben Smith said ahead of the annual conference of the Brussels-based lobbying group.

Airlines also want a “common set of health requirements for travel to and from the affected regions”, he said.

But IAG’s Walsh said that struggling airlines should not be given state aid to enable them to survive the drop-off in demand.

“I don’t believe it’s appropriate for governments to provide state aid to airlines that were not sustainable before the coronavirus,” he said.

The crisis, which has led to a quarter of the short-haul fleet of airlines like Lufthansa (LHAG.DE) being grounded, comes on top of a list of pressures on the European airline industry.

Executives at the Brussels gathering listed other grievances including the failure to reform air traffic control networks under the delayed EU Single European Sky initiative.

“It is a scandal that we are still flying the skies today in the same way we were 40 years ago,” Walsh said.

Taxes on flying were also opposed, with O’Leary attacking plans by Austria’s new coalition government of conservatives and Greens to increase a tax on flights next year.

The Ryanair boss called the new taxes “the equivalent of latter-day highwaymen”.