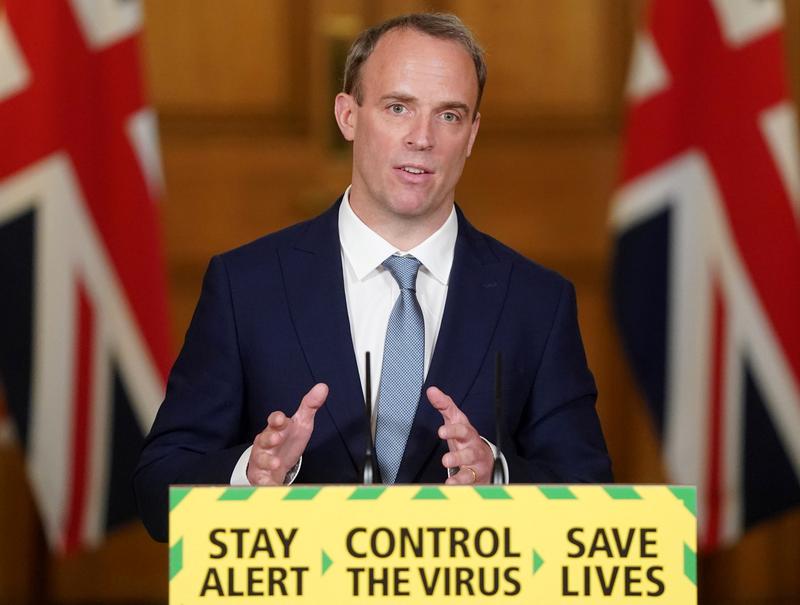 LONDON (Reuters) – British foreign minister Dominic Raab said on Thursday that “taking the knee” seems to have come from the fantasy TV drama series “Game of Thrones” and felt like a symbol of subjugation and subordination.

Britain’s Secretary of State for Foreign Affairs Dominic Raab speaks during a daily briefing to update on the coronavirus disease (COVID-19) outbreak, at 10 Downing Street in London, Britain June 15, 2020. Pippa Fowles/10 Downing Street/Handout via REUTERS THIS IMAGE HAS BEEN SUPPLIED BY A THIRD PARTY. IMAGE CAN NOT BE USED FOR ADVERTISING OR COMMERCIAL USE. IMAGE CAN NOT BE ALTERED IN ANY FORM. NO RESALES. NO ARCHIVES

The death in Minneapolis of a black man, George Floyd, after a white police officer knelt on his neck for nearly nine minutes has sparked protests around the world, with many demonstrators kneeling in streets and squares to protest against racism.

The position was first taken by National Football League player Colin Kaepernick during the playing of the U.S. national anthem to call attention to racial injustice, and has been adopted by many sports players since.

In England, Premier League soccer players including champions Manchester City took a knee before kickoff in support of the “Black Lives Matter” movement when the season restarted on Wednesday.

Raab, asked if he would adopt the position during a TalkRadio interview on Thursday, said he understood the sense of frustration and restlessness driving the Black Lives Matter movement.

He added: “I’ve got to say on this ‘taking the knee’ thing, which I don’t know, maybe it’s got a broader history but it seems to be taken from the Game of Thrones.

“It feels to me like a symbol of subjugation and subordination rather than one of liberation and emancipation. But I understand people feel differently about it so it’s a matter of personal choice.”

Asked again if he would take a knee to protest, he said: “I take the knee for two people, the queen and the missus when I asked her to marry me.”

In “Game of Thrones”, the phrase “bending the knee” is used when someone pledges fealty to a monarch or lord.

Raab later tried to clarify his remarks, saying he had “full respect” for the Black Lives Matter movement.

“If people wish to take a knee, that’s their choice and I respect it. We all need to come together to tackle any discrimination and social injustice,” he said on Twitter.

A clip of Raab’s interview attracted 1.5 million views on Twitter within hours of it being posted and opposition lawmakers were highly critical of his words.

“This is not just insulting to the Black Lives Matter movement, it is deeply embarrassing for Dominic Raab,” David Lammy, the justice spokesman for the Labour Party and a longtime black rights campaigner, said on Twitter.

“He is supposed to be the Foreign Secretary of the United Kingdom.”