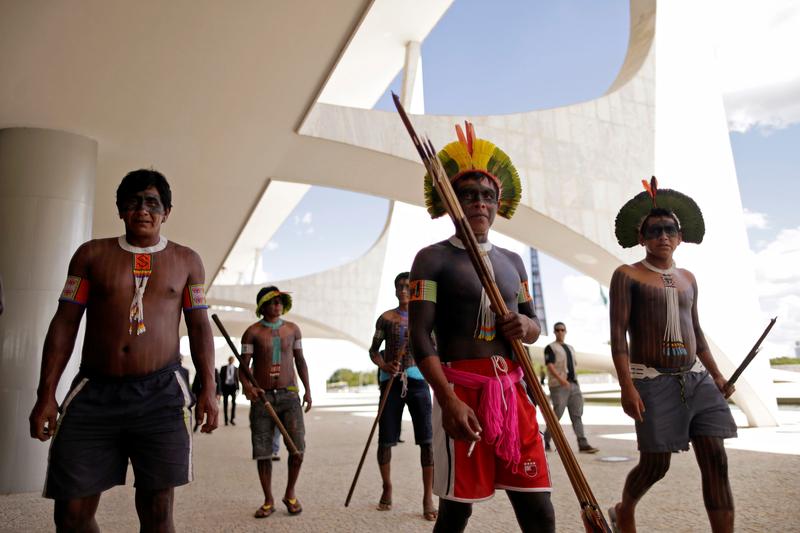 FILE PHOTO: Kayapo Indians occupy the entrance of the Planalto Palace as a protest, in Brasilia, February 2, 2015. The Kayapo Indians are asking to meet with the Brazilian President, and are calling for the renewal of the Basic Environmental Plan (PBA), relating to the infrastructure works in indigenous lands in the south of Para state. REUTERS/Ueslei Marcelino

BRASILIA (Reuters) – Brazil’s indigenous people lost one of their pioneering leaders to COVID-19 on Wednesday with the death of Paulinho Payakan, a Kayapó chief who led protests against the Belo Monte hydro-electric dam in the 1980s.

Alongside Kayapó chief Raoni and musician Sting, Payakan helped bring international attention to the environmental and social cost of building the world’s third largest dam on the Xingu river in the Amazon rainforest.

Payakan, 66, died on Wednesday morning in intensive care in a hospital in Belem, the capital of Pará state, where the coronavirus epidemic has spread among indigenous communities and is killing tribal elders.

The Kayapó chief was sentenced in 1998 to six years in prison for the rape of an 18-year-old student in 1992 with the assistance of his wife, who was also convicted.

Belo Monte started generating electricity in 2016, but the original design was scaled down due to an international outcry and the dam only produces about a third of its planned 11,200 megawatts.