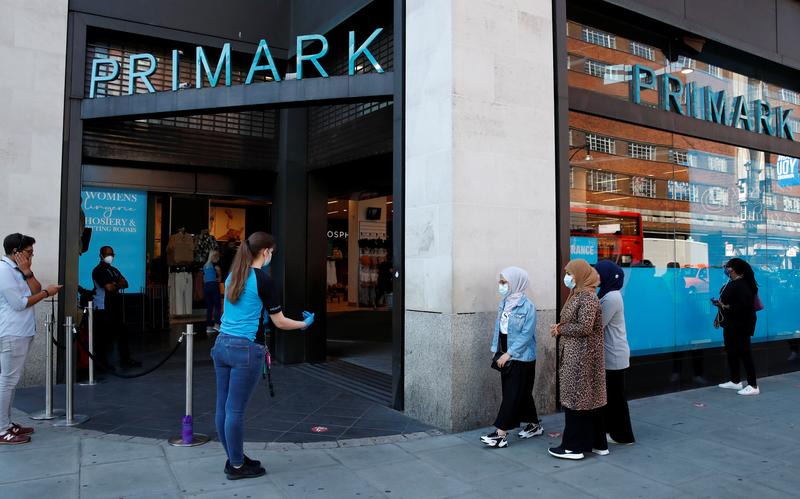 LONDON (Reuters) – Long queues of shoppers snaked around stores in England on Monday, with discount fashion retailer Primark proving a particular draw as shops reopened their doors after 83 days of lockdown.

Queues formed from early morning outside several branches of Primark, which does not sell online so has not made a penny in the UK for months.

The chain reopened some of its stores, including its biggest in Birmingham, early to avoid overcrowding as hundreds of people lined up outside. At its Leeds store, the estimated afternoon wait time to get in was up to an hour.

There was also a big queue outside the Nike Town store on London’s Oxford Street, the capital’s busiest shopping street, with many shoppers ignoring social-distancing rules.

Department stores, clothing retailers, electrical outlets, bookshops and other non-essential stores have been closed since March 23 when Prime Minister Boris Johnson imposed a lockdown to limit the spread of the coronavirus.

The reopening only applies to England, with stores in Scotland and Wales waiting for guidance from their devolved administrations on when they can resume trading. Non-essential stores in Northern Ireland reopened on Friday.

The government is encouraging people to go out and spend to help boost the economy, which shrank by a quarter over March and April.

Retail footfall across England’s retail destinations had increased by 41.7% up to 1100 GMT in comparison to last Monday, researcher Springboard said.

Stores look very different, though, as they must observe social distancing regulations. As well as having to queue outside as numbers inside are restricted, shoppers are greeted with hand sanitisers and there are limits on touching and trying out products.

Some chains are reopening all their English stores, while others are taking a phased approach.

Primark, owned by Associated British Foods (ABF.L), reopened all its 153 stores, while Marks & Spencer (MKS.L), which has traded online and kept its food halls open, reopened the majority of its clothing space.

But rivals Next (NXT.L) and John Lewis [JLPLC.UL] have reopened just 25 and two outlets, respectively, and many small independent stores where it is difficult to implement safe social distancing practices remain closed. See FACTBOX on reopening:

Sofie Willmott, analyst at GlobalData said, while the queues on high streets on Monday might look promising for retailers, there were tough times ahead.

“Footfall and spending will take a long time to return to pre-COVID levels,” she added.